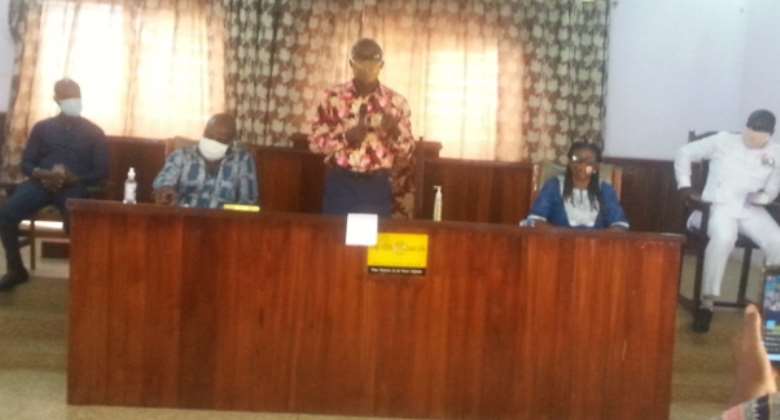 Mr. Richard Amponsah the District Chief Executive for Achiase and Dean of Eastern Regional DCEs has told the public to adhere to the directives and strategies outlined to combat coronavirus by the President of the Republic.

He said the coronavirus has caused destructions to many countries including Ghana and that since the outbreak of the pandemic, the government under the leadership of His Excellency Nana Addo Dankwa Akufo -Addo has put a number of measures in place to curtail it.

He said various Assemblies have adopted several approaches to combat the COVID-19 pandemic, adding that the Akyemansa Block which is made up of Akyemansa district, Asene Manso Akroso District, Achiase District, Birim South District and Birim Central Municipal have coordinated its programmes for effective combating coronavirus.

Mr. Amponsah said this at Akyem Oda during a joint press conference by the Akyemansa Block in a coordinated programme to fight against the COVID-19 pandemic.

Mr Amponsah indicated that, the Block will mount three barriers at each of the district to check the temperatures of passengers entering the districts to augment the Central Government’s efforts of combating the coronavirus.

He added that the barriers will help the security agencies to check drivers for overloading and overspeeding.

Mr. Amponsah cautioned parents who allow their children under eighteen years of age to sell face masks on the streets and markets to put an end to it and hinted that any child who will be caught in such an act will be allowed to face prosecution.

Journalists who took turn at the programme asked questions and were answered by the District Chief Executives.

Lead by example, don’t also travel abroad for one month – Ab...
7 minutes ago