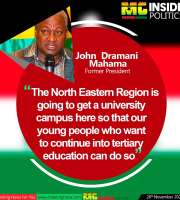 Identification. Ghana, formerly the British colony of the Gold Coast, assumes a special prominence as the first African country to acquire independence from European rule. Ghanaian politicians marked this important transition by replacing the territory's colonial label with the name of a great indigenous civilization of the past. While somewhat mythical, these evocations of noble origins, in combination with a rich cultural heritage and a militant nationalist movement, have provided this ethnically diverse country with unifying symbols and a sense of common identity and destiny. Over forty years of political and economic setbacks since independence have tempered national pride and optimism. Yet, the Ghanaian people have maintained a society free from serious internal conflict and continue to develop their considerable natural, human, and cultural resources.

Location and Geography. Ghana is located on the west coast of Africa, approximately midway between Senegal and Cameroon. It is bordered by Côte d'Ivoire (Ivory Coast), Burkina Faso, Togo, and the Atlantic Ocean. The land surface of 92,100 square miles (238,540 square kilometers) is dominated by the ancient Precambrian shield, which is rich in mineral resources, such as gold and diamonds. The land rises gradually to the north and does not reach an altitude of more than 3,000 feet (915 meters). The Volta River and its basin forms the major drainage feature; it originates in the north along two widely dispersed branches and flows into the sea in the eastern part of the country near the Togolese border. The Volta has been dammed at Akosombo, in the south, as part of a major hydroelectric project, to form the Lake Volta. Several smaller rivers, including the Pra and the Tano, drain the regions to the west. Highland areas occur as river escarpments, the most extensive of which are the Akwapim-Togo ranges in the east, the Kwahu escarpment in the Ashanti region, and the Gambaga escarpment in the north.

Ghana's subequatorial climate is warm and humid, with distinct alternations between rainy summer and dry winters. The duration and amount of rainfall decreases toward the north, resulting in a broad differentiation between two regions— southern rain forest and northern savanna—which form distinct environmental, economic, and cultural zones. The southern forest is interrupted by a low-rainfall coastal savanna that extends from Accra eastward into Togo.

Demography. The population in 2000 was approximately 20 million and was growing at a rate of 3 percent per year. Approximately two-thirds of the people live in the rural regions and are involved in agriculture. Settlement is concentrated within the "golden triangle," defined by the major southern cities of Accra (the capital), Kumasi, and Sekondi-Takoradi. Additional concentrations occur in the northernmost districts, especially in the northeast. The population is almost exclusively African, as Ghana has no history of intensive European settlement. There is a small Lebanese community, whose members settled in the country as traders. Immigration from other African countries, notably Burkina Faso, Togo, Liberia, and Nigeria, is significant. Some of the better established immigrant groups include many Ghanaian-born members, who are nevertheless classified as "foreign" according to Ghana's citizenship laws.

Linguistic Affiliation. Ghana's national language is English, a heritage of its former colonial status. It is the main language of government and instruction. Ghanaians speak a distinctive West African version of English as a standard form, involving such usages as chop (eat) and dash (gift). English is invariably a second language. Mother tongues include over sixty indigenous languages. Akan is the most widely spoken and has acquired informal national language status. In addition to the large number of native speakers, many members of other groups learn Akan as a second language and use it fluently for intergroup communication. Ga-Adangme and Ewe are the next major languages. Hausa, a Nigerian language, is spoken as a trade language among peoples from the north. Many Ghanaians are multilingual, speaking one or two indigenous languages beside their native dialects and English. Although Ghana is bounded by francophone nations on all sides, few Ghanaians are proficient in French.

Symbolism. As a relatively new nation, Ghana has not developed an extensive tradition of collective symbols. Its most distinctive emblems originated in the nationalist movement. The most prominent is the black star, which evokes black pride and power and a commitment to pan-African unity, which were central themes for mobilizing resistance against British rule. It is featured on the flag and the national coat of arms, and in the national anthem. It is also the name of Ghana's soccer team and is proudly displayed in Black Star Square, a central meeting point in the capital. Other important symbols derive from Akan traditions that have become incorporated into the national culture. These include the ceremonial sword, the linguist's staff, the chief's stool, and the talking drum. Ghanaian national dress, kente cloth, is another source of common identity and pride. It is handwoven into intricate patterns from brilliantly colored silk. Men drape it around their bodies and women wear it as a two-pieced outfit. The main exports—gold and cocoa—also stand as identifying symbols.