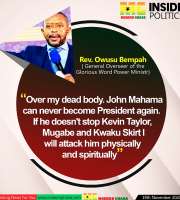 Asante Kotoko: We must beat Medeama to compensate our fans - Prosper Narteh

Wunderkind Alcaraz romps into second round at French Open

The 2022 French Open started amid downpours. So it was that keeping the cro ...

The Central African Republic (CAR) have opted to host its first home game i ...

Division One League side, FC Samartex 1996 have booked a promotion to the G ...

Liverpool will probably be without influential midfielder Thiago Alcantara ...

Manchester City are champions of England for a fourth time in five years af ...