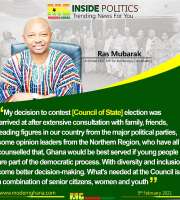 India looks to electric vehicles as the future of transport, but problem...

Britain has unveiled a unilateral plan to drastically overhaul post-Brexit ...

As he handed over the baton of France's foreign affairs portfolio, outgoing ...

Postcard from Cannes #4 : Death on the big screen

Cinema is a place where directors run wild with their imagination, transpor ...

Ukraine's President Volodymyr Zelensky warned Saturday that only a diplomat ...

Friday's session at the Special Criminal Court, where the Paris terror tria ...

A court in India has dismissed a request to open locked rooms in the Taj Ma ...

Flood destroy documents at Lands Commission in Accra
27 minutes ago

Nkroful-Essiama: Motorists, residents stranded due to eroded...
27 minutes ago