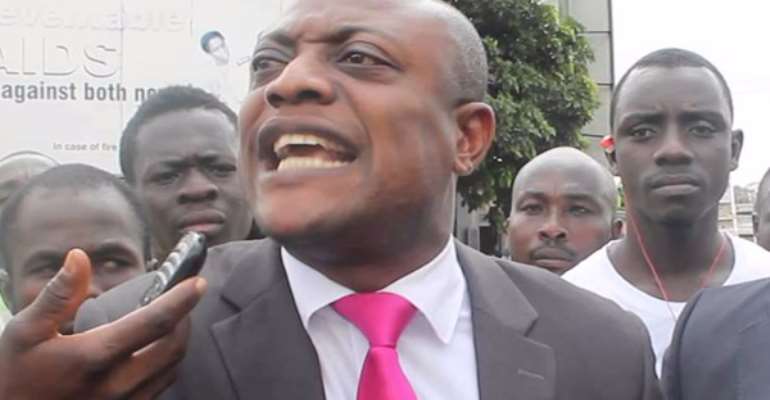 Maverick Accra based legal practitioner Lawyer Dr. Maurice Ampaw claims Ghanaians must blame President Akufo-Addo and his Ministries of State for failing to deal with the leader and supporters of the secessionist movement of Homeland Study Group Foundation.

According to the eccentric legal personality, the Attorney General and the Ministry of Justice failed to nail the separatist group when they were first arrested adding that secessionists were more dangerous than coup makers though the Attorney General declared the government had no interest in the case.

He however proffered to the government to detain the separatists and give them life sentence insisting that the age of the leader should not blind Ghanaians to temper justice with mercy.

Dr. Maurice Ampaw who made the disclosure on Wednesday November 20, 2019 during an interview with Agya Owusu Ansah on Dwaberem political Show maintained that "a separatist if he succeeds, can make claims of territorial land and boundaries, water bodies, airspace, oil and other natural resources so they are very deadly.

"They needed to be dealt with all the severest of punishment. So let’s blame the President, Nana Akuffo-Addo, the Ministry of Attorney General and Justice, the Foreign Affairs Ministry and other Security functionaries for failing to act in accordance with the law. Let me commend Dr. Kwame Nkrumah for being resolute to deny the some groups including the Ashantis to declare their independence.”

Meanwhile, five members of the group have been remanded on treason charges after being arraigned at the Ho District court on Wednesday, 20 November 2019.

Speaking on the loud silence of the opposition National Democratic Congress on the issue, Dr. Maurice Ampaw chastised the party especially the former President John Dramani Mahama for failing to condemn the development.

He intimated that the secessionists come from the NDC stronghold and they should do everything possible to ensure the Volta Region is never separated from Ghana especially as we prepare for the 2020 general elections.

Describing the NDC silence as a useless course on the separatist issue, he charged them to put the needed pressure on the government to do the right immediately.