Western Togoland Terrorism Has a Context to It 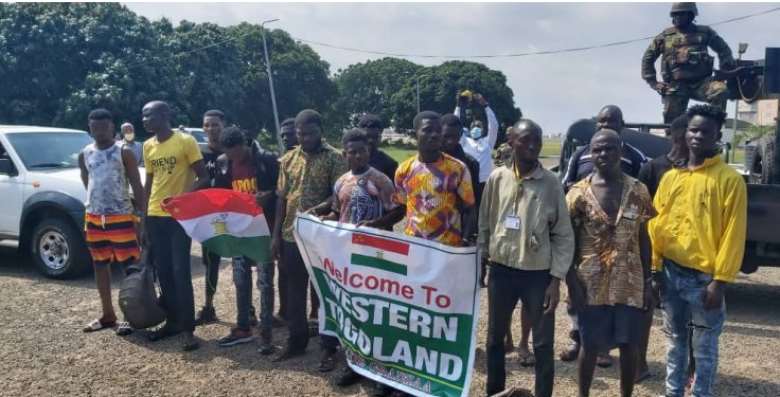 The then-Candidate Addo Dankwa Akufo-Addo won the 2016 Presidential Poll by a seismic One-Million-Plus Votes, so it is rather vacuous for Mr. Kobina Mensah (Wisdom) Woyome, the National Democratic Congress’ Member of Parliament for Tongu-South Constituency, in the Volta Region, to suggest that the ruling New Patriotic Party (NPP) has apparently not seriously been engaged in radically and thoroughly rooting out the violent activities of the Western Togoland Terrorist Organization, because the Volta Region is the stronghold of the National Democratic Congress (NDC), thus allowing the Western Togoland Terrorists to destabilize the Volta Region in the leadup to the 2020 Presidential Election would, somehow, redound to the benefit of the New Patriotic Party, in general, and in particular to the benefit of an incumbent Nana Addo Dankwa Akufo-Addo (See “ ‘Big Names in Govt Popping Up in Togolanders’ Road Blockade’ – South-Tongu MP” Class-FM / Ghanaweb.com 9/25/20).

It is vacuous because we all know that as of this writing and with less than three months to the December 7 polls, Mr. Samuel Ofosu-Ampofo, the National Chairman of Ghana’s main opposition National Democratic Congress, still stands indicted for kidnapping and other seditious and nation-wrecking activities around the country, including the globally infamous Kumasi kidnapping of the three young white Canadian NGO women about a year ago. We have also had former President John Dramani Mahama brag to the nation about the National Democratic Congress’ sporting the most enviably bloody political track-record in Fourth-Republican Ghana, in what became widely known as Mr. Mahama’s “Boot-for-Boot Speech.” So, it is more than highly likely that the activities of the Western Togoland Terrorists are actually being both financially underwritten and strategically masterminded by the key operatives of the National Democratic Congress.

We must also underscore the fact that Mr. Ofosu-Ampofo, the former Mahama cabinet appointee in charge of Local Government and Rural Development, was indicted alongside of some three or four other NDC party stalwarts. It is also quite certain that were the laws of our country as responsibly and rigidly enforced as they ought to be, Candidate Mahama would also very likely have come under legal and judicial scrutiny for the same charges, so far, preferred against Mr. Ofosu-Ampofo. For now, what is important to anticipate is the list of the sponsors of the dastardly activities of the Western Togoland Terrorists, which Mr. Kojo Oppong-Nkrumah, the current Information Minister, tells us is in the grips of Jubilee House and very likely to be published soon.

What Mr. Mensah Woyome has conveniently failed to let on to the Ghanaian citizenry is the irrefutable fact that for the longest period in postcolonial Ghanaian history, the operatives of the Chairman Jerry John Rawlings-founded National Democratic Congress controlled our national security apparatus, therefore these radical “revolutionary” goons tend to be more intimately familiar with the geographical terrain of the country at large but the Volta Region in particular. But we also witnessed the stirrings of the terrorist activities of the so-called Homeland Study Group Foundation (HSGF), the parent establishment of the Western Togoland Terrorist Organization, in the wake of the landmark and morally and politically auspicious decision by President Akufo-Addo to empower the hitherto effectively Ewe-cannibalized people of the Oti enclave of the erstwhile Volta Region, with the vehement protestation of Togbe Afede, XIV, the current President of the National House of Chiefs (NHC), as well as President of the Volta Regional House of Chiefs (VRHC), and intemperately questioning the legality of the creation of an Oti Region, long regarded by the dominant Ewe ethnic group as their bona fide serfs and landed property. It is not very clear to me, but there appears to be a myth or legend about the Ewes collaborating militarily with the English or French to rescue the inhabitants of the Oti Region from their German colonizers.

There can be absolutely no debating the fact that the immediate cause of the latest Western Togoland Terrorists’ treasonable activities may very well have been sparked by the upsurge of protests that met with the legitimate and necessary creation of the Oti Region by President Akufo-Addo. At one point, the so-called Chief Warrior of Togbe Afede’s own Asogli State threatened to take up arms and fiercely fight against the creation of the Oti Region. The irony here, by the way, is the fact that in his characteristically copycat fashion, an incumbent President Mahama had also promised to create some additional regions in the country, including the Oti Region. What we are clearly witnessing here is the deftly and well-funded national destabilization program by the Mahama-led goons of the National Democratic Congress, in a bid to grabbing power by criminally circumventing Ghana’s Fourth Republican democratic process.

Ultimately, the most salient question that really needs answering regards why these terrorists have been practically nonexistent when the National Democratic Congress has wielded power and the reins of governance, both democratic and junta power.