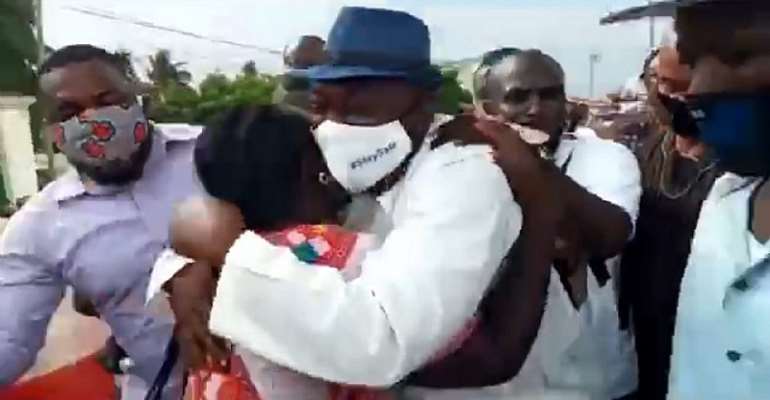 Some three members of Carlos Ahenkorah's campaign team have tested positive for COVID-19 with one person dead.

According to our sources, the three individuals are one Nana Boakye who is at Tema West and currently receiving treatment at home, one Bobo who is a polling station Chairman and currently on admission at Caico Hospital and one Amankwah who was his coordinator at Lashibi but unfortunately passed on yesterday at the Leckma Hospital.

Carlos Ahenkorah has today resigned from his position as the Deputy Minister for Trade and Industry.

Mr Ahenkorah came under intense criticisms when the Tema West MP was spotted at some centres for the voters' registration exercise in his constituency after testing positive for COVID-19.

In interviews he granted to some radio stations on Thursday, July 2, Mr Ahenkorah said he had gone out of isolation because he was asymptomatic.

In a statement issued on Thursday, he denied reports making rounds that he was at the Intensive Care Unit (ICU) of the Korle Teaching Hospital, though admitting that he had been to the hospital for an overnight review of his Covid-19 situation.

He also admitted in the separate radio interviews that he was at the bedside of the Chief Executive Officer of the Forestry Commission, Kwadwo Owusu Afriyie, on Wednesday, July 1, when he died.

He was also seen in videos jubilating and getting touchy with some of his supporters after he was re-elected to represent the NPP as the MP of Tema West in the upcoming elections.

Mr Kwesi Poku Bosompem, an Assemblymember and Keku Amquasia Armuzuah received 111 votes and 70 votes respectively out of a total of 774 votes that were cast, giving Mr Ahenkorah an easy cruise to re-election with 593 votes.

There are now calls from some Civil Society groups that Parliament should strip him off his position as MP for Tema West.