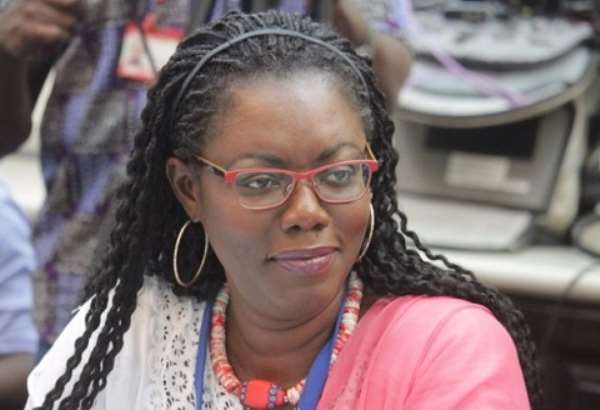 The Communications Minister, Ursula Owusu-Ekuful believes the outgone Deputy Trades and Industry Minister, Carlos Ahenkorah, must be commended for doing the needful after he flouted COVID-19 safety protocols whilst in isolation.

Mr. Ahenkorah on Friday, July 3, 2020, resigned after visiting a centre in the ongoing voter registration exercise despite being aware that he was positive for Coronavirus.

Revelations of his conduct were met with intense public pressure for his removal from government.

But, Mrs. Owusu-Ekuful, who doubles as Member of Parliament for Ablekuma North, has asked Ghanaians to single out her colleague legislator for doing the needful.

“I think that in the heat of the moment, Carlos felt compelled to go out there and monitored the registration process. My heart really goes out to him. He is an excellent material in the Ministry, he will be missed but we must respect and applaud him for doing the honourable thing once he realised that he was part of a government that was preaching the compliance of all the COVID-19 protocol.”

“He breached it and he has taken personally responsible for it. So instead of condemning him, we appreciate the steps he has taken. It is very rare in this country for people to acknowledge that whatever they have done is wrong so they will lay their position down. Others will have been defending the indefensible,” She noted.

Commenting on calls for the prosecution Mr. Ahenkorah, Mrs. Owusu-Ekuful said they had no basis.

“Prosecution for what? unless you can show that an individual contracted the virus by coming into contact with him because he went out on the monitoring. It will be difficult to establish a case for spreading COVID-19 unwillingly. It is easy to say but will you have the evidence to prosecute.”

“I think that if it is a punishment we want, he has laid down his position as deputy Minister to take responsibility for it. You don't beat a dead horse, what else would you achieve by his prosecution? If he had insisted that he hadn't done anything wrong and so he was still going to defend his action then the call for further sanction to be applied would be in order.” Resignation shameful

“He is my colleague but when someone is wrong, the person is wrong. For me, the President accepting his resignation and eulogizing is a shame,” he said in an interview with Citi News. Call for prosecution

Mr. Nketia says the resignation of the Member of Parliament for Tema West is not punitive enough for the harm he allegedly caused.

Already, Pressure group, OccupyGhana has also demanded the prosecution of the legislator for violating the COVID-19 protocols.

The pressure group further called on the governing New Patriotic Party to withdraw the candidacy of Carlos Ahenkorah as its parliamentary candidate for the 2020 polls in the Tema West constituency.

The group described Ahenkorah's action as “despicable, outrageous and selfish”.