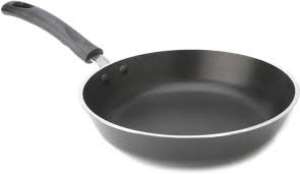 Researchers have revealed that a man's penis could be significantly shorter and thinner because of non-stick frying pans.

Scientists recently made a link between the size of a man's penis and cooking utensils used by their parents to prepare food which they ate. They found that high levels of a chemical called PFCs(perfluoroalkyl compounds) that are used in non-stick frying pans can interfere with male hormones and make men's penises to be "significantly" smaller.

PFCs, which appear to reduce levels of testosterone, are also found in greaseproof packaging and waterproof clothes. The issue is also said to affect teenagers who are still developing.

The research, carried out at the University of Padua in Italy and published in the Journal of Clinical Endocrinology and Metabolism, found men from areas with high levels of PFC pollution had penises that were 12.5 per cent shorter and 6.3 per cent thinner. They measured 383 penises of men around the age of 16 to 22 who grew up in an affected area of Italy near the University and 171 from elsewhere.

A river was polluted as a result of run-off from a chemical factory and water treatment plant. Men in this area had significantly smaller penises than men in areas with low levels of PFC

Padua is one of four areas with high levels of PFC pollution as well as West Virginia in the US, Dordrecht in the Netherlands, and Shandong in China.

It is believed that PFCs bind to testosterone receptors, reducing the male sex hormone in the body. But it’s not just the size of the penis that is affected. PFC also makes sperm less healthy and mobile as well as creating a smaller distance between the scrotum and anus.

As the first report on water contamination of PFCs goes back to 1977, the magnitude of the problem is alarming.

It affects an entire generation of young individuals, from 1978 onwards.

Previous studies linked PFCs to other health problems including early menopause and bladder cancer. They are absorbed in the intestines from eating, drinking and breathing them in and can be toxic to foetuses.

Dr Di Nisio said the problem will continue until PFCs are banned.

Below are other products where PFC can be found: