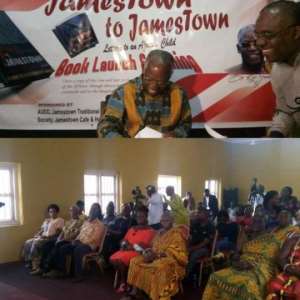 A book on slave trade titled “From Jamestown to Jamestown; Letters to an African Child” was launched in Accra on Wednesday.

The 230-page book authored by Professor Kojo Yankah, the Founder of the African College of Communication (AUCC), details slave trade and civil right movements in America in a clear and succinct way to enhance understanding.

It also seeks to provoke the youth of Africa to sharpen their understanding of the vision of the forefathers and visionary leaders.

Speaking at the launch, he bemoaned the absence of pride in most Ghanaians, and generally Africans and people of African descent.

The professor, who is an author of a plethora of books, said the book should therefore inspire confidence in the African people and serve as a wake-up call to the African and people of African descent of the need to cherish their rich heritage.

“This book is to give confidence to people of African descent that they have a proud civilization and the necessary human and natural resources to rise up and build a powerful United States of Africa”.

“It is also to enable readers to affirm that all people of African descent have a common heritage, as well as to bridge the gap that exists between Africans on the continent and those in the diaspora,” he added.

Prof. Asare Opoku, an icon of Ethnomusicology, described the book as “a thoughtfully refreshing account of African history that pensively reflects the ancestral wisdom of our fore births that urges lions (Africans) to tell their own stories instead of relying on stories that hunters (foreigners) tell to glorify themselves at the ruinous expense of lions”.

He said centuries of other people’s narration of African history had beclouded the truth about Africans and their history, adding that Africans could only safeguard their ever-abiding consciousness and substantial identity when they begin to tell their own stories from the African perspective.

Prof Opoku entreated Ghanaians and Africans in general to resort to the book to seek for the truth about the history of the people of Africa.

Dr Brenda Joyce, the immediate past President of the African-American Association of Ghana, who launched the book described it as the right material for any African who wishes to understand the history of slavery and the history of civil right movements in the diaspora, particularly in America.

“It shows that all of the things that have been said and have been written in order to enslave the minds of African people so they could enslave our bodies were lies. It proves and shows that clearly in the pages of this book,” she said.

She said it was therefore imperative that Africans united to ensure that development was bolstered.