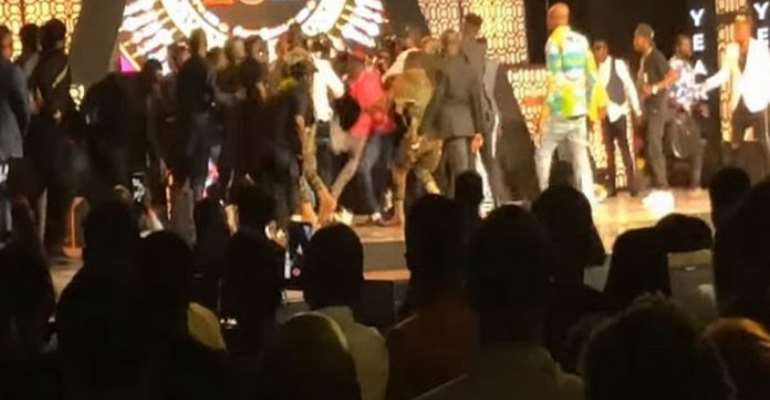 The Accra Regional Police Command are searching for the person who was seen in a viral video handing over a pistol to Stonebwoy during his brawl with Shatta Wale's team at the Vodafone Ghana Music Awards last Saturday.

The young man, whose identity is currently unknown, is suspected to be one of Stonebwoy’s team members and also acts as his bodyguard.

In the video, the unidentified man is captured pulling out the weapon from what is believed to be a bag and passing it on to Stonebwoy in the midst of the confusion.

In addition to pursuing the unidentified man, the police have also asked Stonebwoy to produce the weapon which was seen in the video.

Also, some team members of Charles Nii Armah Mensah, who goes by the showbiz name Shatta Wale, who were seen heckling some members of Stonebwoy’s team on stage during the confusion are also being pursued by the police for arrest.

Speaking to the Daily Graphic, the Commander of the Operations Unit of the Accra Regional Police Command, Assistant Commissioner of Police (ACP) Mr Kwesi Ofori, said a team of policemen had been dispatched to search the homes of Stonebwoy and Shatta Wale.

"I want every Okada driver to be a billionaire" — ‘CODA Dri...
28 seconds ago