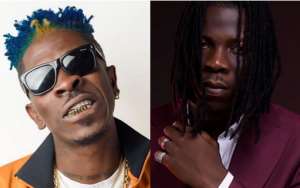 The two rivalries, Shatta Wale and Stonebwoy have both been granted GH¢50,000 bail each with one surety by an Accra Magistrate Court today.

This is as a result of their brawl which almost marred the 20th Vodafone Ghana Music Awards held at the Dome in Accra.

However, the two according to sources, in a court presided by Magistrate Isaac Addo, pleaded not guilty to charges they are facing.

The Scuffle on stage last Saturday began when Shatta Wale climbed upstage with his fans at a time his rival, Stonebwoy was on stage receiving the Reggae dancehall artiste of the year award.

This led to fisticuffs between Stonebwoys manager, Blakk Cedi and Shatta Wale's fans when he tried to stop them from climbing the stage.

Meanwhile, the two have issued statements apologizing to organizers of the event, Charterhouse, and Ghanaians for their action at the just ended VGMA.