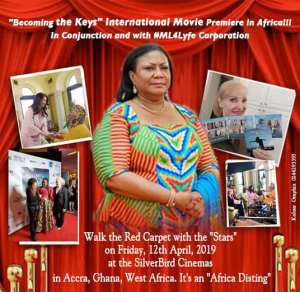 After the Star-Studded VIP premiere of Robin Jay’s “Becoming the Keys” Movie in Las Vegas, the Motivational Film is NOW IN Ghana this April! www.thekeymovies.com.

The Ghana premiere, scheduled for the SilverBird Cinemas (Accra Mall) is made possible by Ghanaian-American Global Public Speaker, Mona Lisa "ML" Brookshire née Blay-Miezah, the CEO of #ML4Lyfe Corporation; a Global Brand Marketing Company. She is also an International Public Speaker who has appeared on the TED platform. http://www.ted.com/profiles/9328681

ML, who is also a Freelance Writer, and a Brand Marketing Strategist, stars as a Panel Expert / Coach in the PureFlix Inspirational and Motivational Self-Help Movie, "Becoming the Keys".

She starred as the First Black African Female to portray the role of a Seasoned Life Coach and Panel Expert in "Becoming the Keys" with the likes of Veterans, Jack Canfield, Joseph Vitale, Brian Tracy, and other Renowned Motivational Speakers.

"I am humbled by the great opportunity that the aforementioned Self-Help Movie has placed within my lap. As a female, As a Mother, As a Ghanaian-American, and As an African, I avidly welcome the Limitless avenues that will be availed to me inadvertently; AS WELL AS the people of my native country, by virtue of even sheer investment, tourism and overall global exposure.

The world is now a borderless global village and it simply amazes me that the Good Lord has been able to use "Little ML" to bridge gaps and cross borders of inter-culturalism et al. I am EQUAL to the Task and the Sky(e) is ONLY the beginning for my future Media exploits and interrelationships. To God be the Glory!"

"Becoming the Keys" is the third film in the Key Movie series. The films are unique hybrids that combine a narrative story and fictional characters interacting with cameos from some of today’s top thought leaders.

These well-known and internationally-recognized Self-Help icons are joined by an outstanding cast of experts, authors, coaches, and professional speakers from around the world.

The Special Guest of Honour for the Red Carpet Premiere Event Night of April 12th is the First Lady of Ghana, West Africa, Her Excellency Rebecca Akufo-Addo.