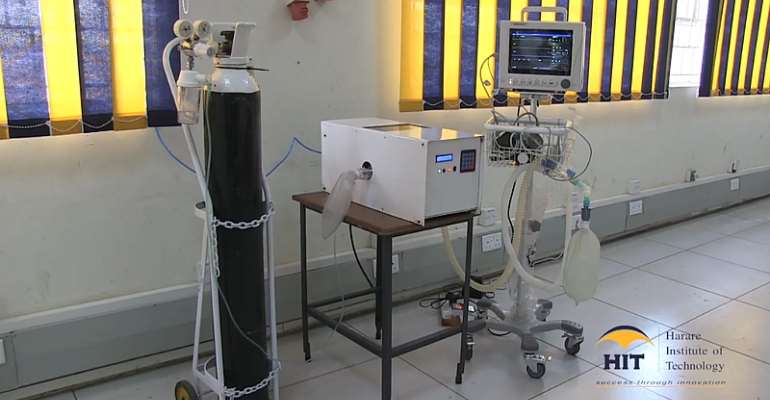 Like the rest of southern Africa, Zimbabwe is bracing for Covid-19 cases to climb. But there's been an unexpected publicity boost for its universities, which are producing face masks, hand sanitiser, and even a prototype ventilator, to help fight the pandemic when it really hits.

Zimbabwe has 20 universities and a number of polytechnics. Once well-reputed, the quality of education they offer has been called into question, not least when former president Robert Mugabe's wife Grace was improperly awarded a PhD by the flagship University of Zimbabwe seven years ago.

Now though, with its doors closed to students, UZ is producing hand sanitisers and there are plans for it to produce intravenous fluids.

Africa University, just outside the eastern city of Mutare, has a Facebook feed full of pictures of the hand sanitiser the institution's department of public health and nursing is producing with funding provided by Old Mutual Zimbabwe, a finance company. The department expects to be able to provide 550 bottles per day.

Lab technician Chipo Mazangairi told the university's website: "I see it as helping save lives and serve the nation."

In the north of the country, the Chinhoyi University of Technology – of which young opposition MP Joana Mamombe, 27, is an alumnus – has got its Fashion Textile Department producing 3,500 face masks per day.

Meantime – and to some scepticism – the Harare Institute of Technology has produced a prototype oxygen ventilator. Zimbabwe, like many countries in Africa, is critically short of the machines.

Officials at the HIT say their prototype is still to undergo trials.

“With this unit we can begin to respond to patients as they come in. As we respond to them, we can try to reduce the burden on the ICU-grade ventilator units,” said one of the HIT designers, Edmund Maputi, in a video posted on the institute's Facebook page.

Zimbabwe universities are more often seen by locals as degree factories in a country where skilled job opportunities are limited due to economic turmoil. Their function as generators of research and innovation is less well known.

"Are we turning universities into production plants and test centres now?” asked one bemused Twitter user, when it was reported at the end of last month that the National University of Science and Technology's laboratories – located in Bulawayo – were suitable to test for Covid-19.

Other Twitter users jumped in to defend the new role for the country's tertiary institutions.

"That's what universities are for. Research and availing their knowledge and skills to the people. Not mere ivory towers giving people papers, gowns and caps," said one.

"This is a positive thing with our universities," Norman Matara, secretary general of the Zimbabwe Association of Doctors for Human Rights told RFI.

"They were producing academics who do not actually provide practical solutions to the problems that we are facing in the country. This Covid-19 pandemic has actually brought about the innovation – that universities play a positive role in terms of assisting the nation."

President Emmerson Mnangagwa himself says the coming together of local universities and companies to provide essential materials for the health sector is a “silver lining to the present global health crisis”.

“It is commendable that local industries and universities have become hubs for import substitution,” he said in a televised address to mark the country's Independence Day on Saturday.

Zimbabwe, at the last count, had fewer than 30 cases of coronavirus, three of them fatal. But with limited testing going on, there are fears the disease is a lot more widespread.

Import substitution will prove vital in helping the country weather the storm.