Germany to prolong lockdown until 3 May, some easing in sight 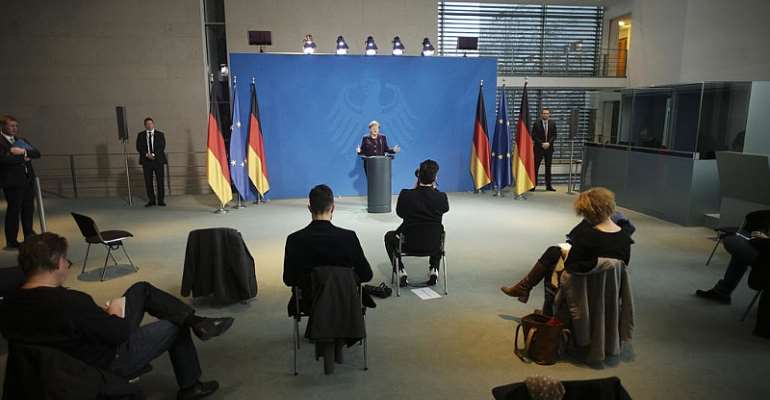 Germany is set to extend its coronavirus lockdown beyond Sunday until 3 May, while some shops will be allowed to reopen from next week. Experts say the country's confinement measures are working but that the epidemic was not yet fully contained.

Chancellor Angela Merkel and governors of Germany's 16 states decided to extend the measures that have been in place since mid-March.

They also discussed proposals on how to begin easing some of the restrictions as infectious disease experts confirmed that the lockdown was working, but that social distancing measures would have to be maintained.

The proposals include reopening schools gradually from 4 May, beginning with primary and secondary students in their final years. Schools will be required to outline a hygiene plan before they reopen.

Day-care centres are to remain closed.

Restaurants, cafes, bars, cinemas and concert venues will also remain closed. But retailers with premises under 800 sq metres, along with hairdressers, zoos, and public libraries will be allowed to open from next week under strict social distancing and hygiene rules.

“Across Germany, people clearly understand and fully agree with what needs to be done to protect citizens' health and to contain the spread of infections,” he said.

Germany has not imposed total confinement across the country, but the government is keenly aware of the risk of lifting restrictions too early only to have to impose a full lockdown later.

This has not stopped protesters in Berlin and other cities coming out onto the streets in their hundreds or thousands to protest against the measures.

Merkel's cabinet has already decided to extend border controls to Austria, Switzerland, France, Luxembourg and Denmark by 20 days to early May, an Interior Ministry spokesman said.

As EU countries begin to experiment with lifting lockdown restrictions, the European Commission has urged member states to work together, warning that failure to coordinate their efforts could lead to a second wave of infections.

The government and businesses are concerned that extending the lockdown even further will have a lasting effect on the economy.

Germany went into recession in March and the Economy Ministry says the slowdown will likely continue until the middle of the year, despite government measures to ease the blow, including a 750-billion-euro stimulus package.