The Flip Side Of COVID19 Crises 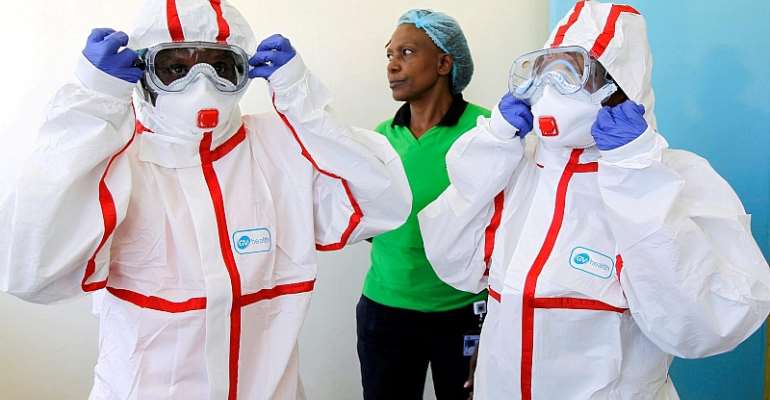 I keep saying that If you can trust China, then you can equally trust the devil!

China remains one of the few Communist remnants in the world currently rooting with rogue nations such as Russia, Iran, and North Korea. ... so don't hasten to dismiss what some conspiracy theorists are asserting that COVID19 is China's invention meant to brush the world aside for its economic control.

But before you read this, hey ! know that, In China Democracy is a farce and a hoax! The media reports only on information that has gone through govt's filter processes!

The Geopolitical dimensions of this ravaging Coronavirus have brought up the flip side for interrogations by various theorists: And this is " This deadly virus was created deliberately in a bio lab located in the outskirt of Wuhan as a bioweaponry by Chinese scientists to be used against other countries to cement China's economic superiority but unfortunately the virus accidentally got leaked before schedule "!

As it stands now : there are two separate Class-action lawsuits filed against the Chinese government for its involvement in COVID19 pandemic : (you can verify)

Assumptions ...How True Can This Be!

If the COVID19 virus was created in the lab by China, what it means is that China has an antidote to it! But their fear is that at this point if China quickly comes out to tell the world that they have remedies for the virus, there will be a lot of questions and such move will again give credence to suspicions other countries and cynical theorists harbour about the development, so this is what China is doing .... playing their usual communist tactics by

lying to the world that they have discovered local herbs which has become a breakthrough medication against the virus ....Fact : currently cases of new infections have suddenly stopped in China for weeks and those who got exposed are recovering at a miracle speed as economic activities in China prep to bounce in the coming days while US and Europe, China's main competitors are helplessly drowning in this Chinese Tsunami !...funny enough, China is yet to tell the world what those herbs are exactly !

The Chinese government at the early stage of this outbreak took advantage and bought shares of foreign companies that were fleeing china because of the virus ..and those shares were sold at a cheaper cost to the Chinese govt and Chinese companies ...remember that the state has absolute control over private setups in communist regimes such as China!

Now US is losing its economic footing because of the COVID-19 crises, investors are running from the US and are looking in China's way because the situation there is stable and under control while US and Europe have become the epicenter of this death-bound virus !

As we speak China's stockmarket is the best performing one in the world despite this COVID19 outbreak ! Source : The Economist.com

Again currently some big Chinese companies have resumed work and it's expected that China's economic force would click to full working gear in the coming days leaving the rest of the world in misery and desperation !

Why will China ship fake PPE's to some European countries in the midst of this merciless death storm ! The Netherlands, Spain and Turkey have all claimed there have been problems with products including masks and tests,...the Dutch govt recently recalled over 600,0000 PPE'S shipments from China because they were all fake and faulty

Interestingly unlike other viral infections in the past, this Chinese Virus has a surprise way of finding some key personalities but in the heydays of this outbreak in China, the situation was different ! So is this some kind of a covert Target attack on world ?

If you have doubt about this notion of mine, Just relax, sit back and do a diagramatic analysis of all the key persons who have tested positive to this virus and link your sketch to my analysis here !

At this point, death toll in China has remained same for a stretched period while Italy and Spain have both become worse victims of this Chinese Curse with countless body counts, leaving the world in an ewe of mass hysteria

This is why Ghana must be careful with shipment brought in by Jack ma and his Alibaba Inc.......It could be a mousetrap!! Have we checked and verified the items: The Nepal incident is still fresh on my mind!

I'm Ivan Kyei Innocent, I'm no cynic, just telling you to be Informed!! ...