France Covid-19 deaths top 3,000 as groups petition for factories to be requisitioned 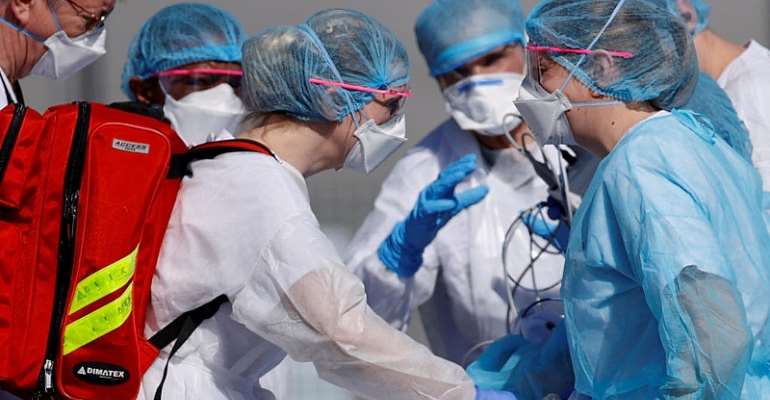 France's coronavirus death toll has topped 3,000, as people are respecting confinement measures to keep the spread of the virus in check. Businesses affected by the virus have been receiving government-backed loans, and the government is being petitioned to requisition factories into making medical supplies.

As the World Health Organisation says that Europe could be approaching its coronavirus infection peak, France has seen its death toll increase, with 418 new deaths in hospital on Monday, bringing the total to 3,024, out of 44,550 officially recognised cases.

The head of the French public health authority, Jerome Salomon, said the effects of confinement measures put in place two weeks ago might start to be felt within in a few days.

Paris prosecutor, Remy Heitz, said Tuesday that the measures are being respected by most Parisians. As of Monday, police had checked some 303,000 people to make sure they had legitimate reasons for being outside, and had the proper documentation, and only 25,000 were fined.

For Heitz, this indicates that nine out of ten people are following the rules, a difference from two weeks ago, when scenes of Parisians picknicking in parks and along the Seine river shocked the government.

Economic measures taking effect
Meanwhile, some 21,000 French companies that have been forced to close or slow down work because of the confinement measures have asked for government-backed loans to stay in business, according to economy minister Bruno Le Maire.

Le Maire said the measures put in place by the government are working, while recognising that some small businesses are still having trouble securing loans.

Meanwhile, a quarter of France's 10,000 open-air food markets will re-open this week under strict distancing and hygiene conditions. On Friday the government banned all food markets, but farmers depend on them to sell their products.

The majority of the markets reopening will be small, with fewer than ten sellers, in small towns. Markets in the Paris region, as well as in the east of France most hit by the virus, will remain closed.

France still lacks supplies
France continues to struggle with finding enough medical supplies for doctors and nurses working with Covid-19 patients. President Emmanuel Macron is due to visit a mask-producing factory near Angers, which has been working 24 hours a day to produce enough masks.

And five organisations have asked the Council of State to require the government to requisition factories into making masks and protective material. The request also asks for authorisation for veterinarians and all testing labs to be able to test for the virus.

The groups include a collective of medical personnel, Act-UP Paris, and the association for the defense of constitutional freedom.

They hope their petition to the highest court will end the government's “hesitations” over forcing factories into producing material, as allowed for in the law.