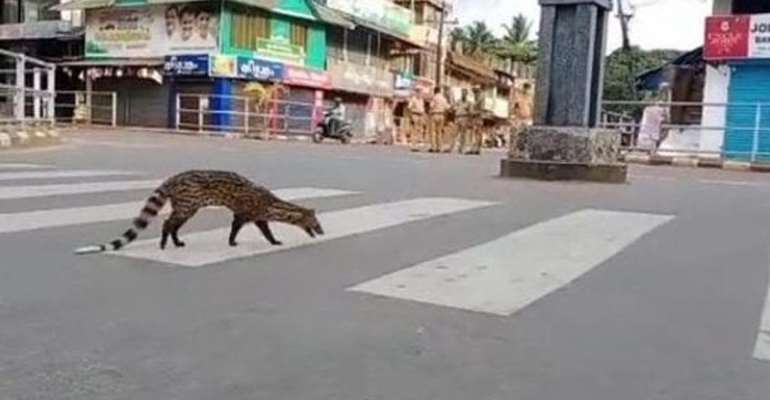 As more countries ask their human populations to stay at home to limit the spread of coronavirus, wild animals have been spotted exploring the empty streets of some of the world's largest urban areas.

Film footage of a civet cat roaming the deserted streets of Kozhikode in the Indian State of Kerala went viral on social media, while a puma turned up in the centre of the Chilean capital Santiago, a city which is under curfew.

"This is the habitat they once had and that we've taken away from them," said Marcelo Giagnoni, the head of Chile's agricultural and livestock service.

In Europe, wild boar have descended from the hills around the Catalan city of Barcelona, while ducks were seen walking quietly near the Comédie Française theatre in central Paris.

In the Mediterranean, dolphins have reappeared in several ports. Emboldened wildlife has returned "to wander our cities and towns", according to Romain Julliard, head of research at the French Natural History Museum.

He told French news agency AFP that foxes were at the vanguard of the new urban explorers. "They change their behaviour very quickly. When a place becomes quiet, they're straight in there."

Animals and birds that normally live in urban parks, like sparrows and pigeons, are also more likely to venture beyond their usual territories, Julliard said, "freeing a space for other animals".

It is also certainly great news for species like the common toad and the spotted salamander. The amorous amphibians are being spared from being "crushed crossing busy roads" in their haste to find a mate, said Jean-Noel Rieffel, of the French biodiversity office (OFB).

In the Calanques National Park overlooking the Mediterranean near France's second city of Marseille, wildlife "is reclaiming its natural habitat with surprising speed", according to the park authority's president, Didier Reault.

With walkers, bathing and boating banned, the puffins who used to stay on the small islands in the most protected areas are now extending their range, he adds.

Biggest impact may be on humans

Didier Reault says the biggest impact is on humans. "The most important phenomenon perhaps is our relationship with nature changing with people locked up in their homes realising how much they miss nature," he said.

However, there are also down sides to the lockdown for nature.

Work to limit invasive species has been all but halted, cautioned Loic Obled of the OFB, as have efforts to help endangered species.

And Jean-Noel Rieffel warns that, when the lockdown ends, "people will have a need of nature and there is a risk of too many visitors" to natural parks.