Health Experts, Religious Leaders Others Commend Mahama For His involvement In The Covid-19 fight 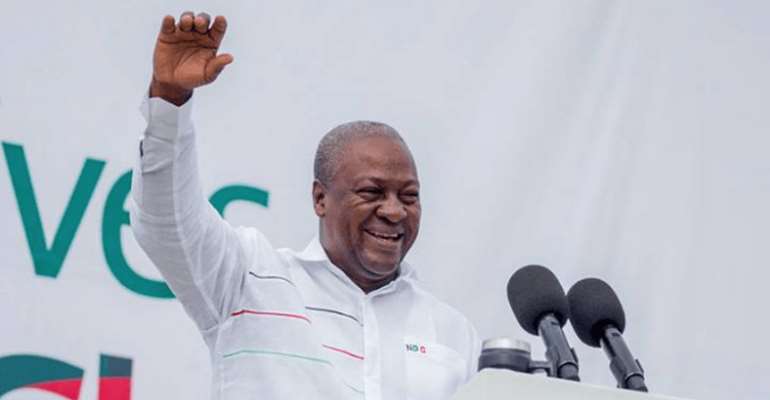 Former President John Mahama has been commended by some heads of religious organizations, health experts and social/political commentators for his personal involvement in the COVID-19 fight.

The former President has termed the situation a national challenge, saying that beyond political and ideological differences, every individual has to play his or her role in this fight. The former President has advised Ghanaians not to waste our energies over criticism, dissemination of false information, blame game and political point-scoring, and collectively, focus on fighting the deadly disease.

According to the former President, the government needs to understand that the war against coronavirus has to be fought on two fronts: containing the spread of the virus and mitigating the economic damage the virus will cause. He urged the government to extend its support to all the regions, districts, and villages. He said our steps could only be effective if the country is united.

The former President who has embarked on self "precautionary measures" education, has also advised his appointees who supported him during the Ebola fight to make their services available to the government anytime they are called upon to do so. So far, he has shown his presence as a leader by always reassuring Ghanaians who count on him that he is around and doing everything in his power to make sure we collectively weed out this dangerous Virus.

The Former President, through his interactions with the public via his Facebook page and other platforms, educate Ghanaians and keep people informed often and consistently. He has so far kept a level head by remaining optimistic and forges ahead with constrictive ideas and a disciplined focus.

A simple acknowledgment by the former President and his party of some of the measures taken by the President and his government is a mark of a mature opposition. It is not a sign of weakness, on the contrary, it strengthens the spirit of national unity.

The opposition will always remain irrelevant if it does not truly practice what is expected of an opposition party. In opposition, the Npp neglected this prudent virtue because it was not in power. The prayers of most Ghanaians are that the NDC continues to exhibit this unprecedented maturity and always rises to fulfill the role of the opposition, which the NPP could not fulfill in opposition.

The former President's criticisms so far have been constructive. The opposition must oppose when the need arises but must also support the government's initiatives by offering alternative ideas and policies.

The former President has suspended his campaign, suspended all political activities including his interactions with the various associations to join the coronavirus fight and education. This is the first time in the history of this country that we seeing this genuine cooperation and commitment. This is the kind of leadership Ghanaians, and Africans, in general, have been yearning for decades.

The former President today joined some religious leaders and party folks to pray for the nation. He used the occasion to continue his precautionary measures education and called on all Ghanaians to support the anti COVID-19 fight.