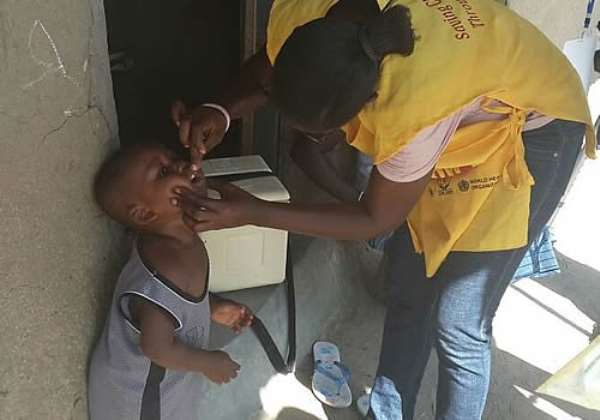 Following the detection of polio cases in the Nkwanta North and Krachi Nchumuru districts of the Oti Region, the Ghana Health Services is embarking on a mass reactive vaccination exercise in the entire region.

This is in line with the World Health Organization’s (WHO’s) recommendation for three rounds of oral polio vaccine to be administered to eligible children in a mass vaccination campaign in the affected districts and region to prevent the possible re-emergence of the child killer disease in Ghana.

The first round, "Round 0" was conducted in December 2019 in the Nkwanta North and Nkwanta South Districts.

The Round one Polio Vaccination Campaign which kicks off from January 8 to 11 is to ensure children are protected against polio.

About 148,430 children under the age of five are expected to receive a dose of the Polio Vaccine (mOPV) during the campaign.

Round 2 of the campaign would be administered to beneficiaries in a month’s time after the Round one exercise.

The Deputy Volta Regional Director in charge of Public Health of the Ghana Health Service, Dr Yaw Ofori Yeboah said an emergency operation centre (EOC) will be set up at Jasikan to monitor and coordinate the vaccination campaign.

”If we don't achieve high coverage, our kids will be at risk, and it could spread to other parts of the country”, he warned when he addressed the media in Ho.

He, therefore, called on parents, opinion leaders, community members and other stakeholders to corporate with filed officers for a successful campaign.

The Volta Regional Coordinator for the Expanded Program on Immunization, Anthony Pani, detailed that about 928 officials - who will be directly in charge of administering the mOPV - have been adequately trained, assuring the safety of beneficiaries.

He said, “464 teams, compromising a vaccinator and volunteer in each team, will be deployed to all 8 districts for the campaign.”

Mr Pani disclosed that a software application, ODK, has been specially developed for an effective collation of data as other relevant information during the exercise.

”All the field supervisors have the ODK app installed on their phone. This will serve as a medium of transferring data and information from the field to the emergency operation centre in Jasikan and Accra”, he explained.

Polio is a virus transmitted through contaminated water or food, or contact with an infected person, which may cause paralysis in children. It is easily preventable by the polio vaccine.