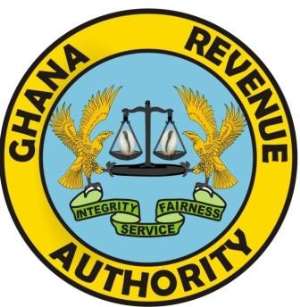 I write in response to a politically - inspired publication with the caption ROT AT GRA... COMMISSIONER GENERAL READIES TO PROBE OSU BRANCH , captured in the New Crusading Guide newspaper of 27 May, 2019 in which a myriad of uneducated lies were bandied about about a certain nameless senior auditor at the OSU Branch of GRA, who,according to the fake publication is the object of an imminent probe for allegedly indulging in various acts of venality and impropriety.

For the avoidance of doubt , permit me to aver from the outset that the publication mentioned supra is merely a smear campaign funded and designed by Mr Peter Adaliwe Kaba, a Parliamentary aspirant and his cohort, Mr Francis Abagali, the constituency Vice Chairman to cast aspersions at a fine gentleman who is tipped to emerge triumphant in the up - coming NDC Parliamentary Primaries in the Navrongo Central Constituency, in the event he decides to contest . This fine gentleman is no other than Mr Sampson Tangombu Chiragia who is seen by many as the favourite in a potential Parliamentary Primaries and who happens to be a senior auditor at the OSU Branch of GRA.

This concocted story of corruption at the OSU Branch of GRA is therefore a vain attempt , by Mr Peter Adaliwe Kaba, aimed at not only denting the impeccable reputation of Mr Sampson Tangombu Chiragia but also scuttling any political ambitions he may be nurturing as a result of the endless calls on him by the people of Navrongo to lead the constituency in the near future.

Naturally, the publication should therefore be treated with the utmost contempt it deserves because as I said earlier on it is the handiwork of known persons in Navrongo who see Mr. Sampson's soaring popularity in the Constituency as a mortal threat to their own parochial political ambitions.

The masterminds of this publication see the prospect of Mr Sampson Tangombu Chiragia's candidature as a looming danger that would most likely upset their own chances.

To this end , they are therefore employing the backdoor tactics of lies and and character assassination in a bid to annihilate this veritable mortal threat to their political ambitions.

It is therefore highly reprehensible for a reputable Newspaper of the stature and pedigree of the New Crusading Guide to allow itself to be used as a conduit to advance the two - faced machinations of unscrupulous and unprincipled local politicians who would stop at nothing to advance their ill - fated parliamentary ambitions.

The publication in essence is a ploy contrived to set the pace for a well - coordinated, elaborate and localized campaign of lies hatched in a futile attempt to scupper, in their estimation , the desire of the indigenes of Navrongo to rally behind Mr Sampson Tangombu Chiragia as their Parliamentary Candidate in the not too distant future .

For fear of prosecution for the slew of lies in the said publication, the name of the target of their outlandish corruption allegations is deliberately not mentioned .

However, this belies the fact that in Navrongo, the masterminds of this disingenuous publication have setup a clique of ne'er - do - wells who are circulating this phoney corruption apocryphal and trying to mislead people into believing that Mr Sampson Tangombu Chiragia, would soon be investigated for corruption. In fact, wherever these hangers - on go, they brandish the 27 May edition of the New Crusading Newspaper , where they planted the fake corruption story in the first place, in a bid to impugn Mr Sampson's hard earned reputation. This ruse is dead at birth!

This is the height of political treachery!

At this juncture, notwithstanding the fact that the whole publication is a sham, permit me to directly address the lame and concocted corruption allegations levelled against the nameless Senior Auditor at the OSU Branch of the Ghana Revenue Authority.

For starters, it is claimed in the aforementioned piece that Kofi Nti, the Commissioner General of GRA would soon commence investigations into alleged fraudulent acts being perpetrated by some Officers, especially those at the Osu Branch of the State revenue collecting agency.

Allow me to submit that there is nothing the matter wrong with investigating "allegations " of corruption against any official,branch, institution etcetera in this country but what we must not lose sight of is the fact that the allegations remain mere allegations in so far as no investigation has commenced yet and no one has been found culpable of any wrongdoing for that matter.

Against this backdrop , it is therefore sinister for any politician to lap on an impending investigation as evidence in itself of corruption against his perceived opponent in a bid to besmirch his reputation.

It is even more worrisome when the Commissioner General has not disclosed any intention of conducting such a needless investigation but that these allegations have been deliberately planted in the New Crusading Guide Newspaper by a rapacious politician from Navrongo in an attempt to eclipse the political fortunes of a perceived rival who happens to work at GRA - as is the case in this instance - and in the process unjustifiably dragging the reputation of a whole institution in to the mud.

It is owing to political intrigues of this dastardly nature that many a well meaning Ghanaian, with the wherewithal and leadership acumen and astuteness needed to lift this Country out of the doldrums of poverty, have decided to stay aloof from politics.

In their bid to buttress their baseless allegations of corruption against the unnamed senior auditor at the Osu Branch of GRA, it is also claimed in the publication that

" For instance , one of the cases ready for probe could be the circumstances under which a senior Auditor at the OSU Branch of GRA, (Name withheld) allegedly often gave tax waivers to companies without approval from his superiors."

The assertion above does not only fly in the face of the truth and laid down revenue collecting procedures but is downright nonsensical. The Shakespearean Verse rams home my point better "It is full of sound and fury, signifying nothing."

Even a renowned classy Clown of Lancelot Gobbo's proportions is aware of the fact that it is only the Commissioner General of GRA who can grant limited tax remission or waivers and not a senior auditor of the Osu Branch as the publication would want us to believe . How this elementary fact could have escaped the grasp of a parliamentary hopeful, is any ones guess! Tax remission or waivers are the prerogative of the Legislature! They are not like Christmas gifts handed by Santa Claus to excited kids!

In the light of only this point above it is obvious that the publication is fake,unenlightened and money induced. Both the writer and the publisher of the story seem to be hopelessly ignorant about processes and procedures of revenue collection.

In any case, if the writer and publisher thought there were an iota of truth in their infantile allegations why the hush hush on the name of their "errant" senior auditor?

As if they haven't spewed enough garbage already, the publication goes on thus

"He allegedly gave tax waivers to a certain private security company, which company he later allegedly destroyed its tax history file just to escape being caught."

As if tax waivers are hampers that could be doled out to any company one wills!

Let me reiterate the point I made earlier that a senior auditor has neither the power nor authority to grant tax waivers.

The publication rambles on

" worst is that the senior auditor was recently also alleged to have aided an automobile company to evade tax due to the state to the tune of four million Ghana cedis."

Interestingly, the supposed senior auditor who is at the OSU Branch is accused here of aiding an automobile company at Spintex to evade tax. And Jesus wept. Just how a senior auditor at the OSU Branch of GRA was supposed to have managed to aid a company in a different jurisdiction, Spintex Branch, to evade tax to the tune of four million Ghana Cedis , is difficult to comprehend !

According to the publication he was supposed to have aided the automobile company to evade tax by influencing the Audit officer at Spintex that worked on the tax file of the company!

This is the most puerile and absurd attempt at character assassination one can ever behold ! There is a clear character assassination manhunt for a perceived foe at the OSU Branch of GRA - and that foe is Mr Sampson Tangombu Chiragia whose only crime is that the people of Navrongo are calling on him to vie for the Parliamentary seat of the Constituency.

It is pathetic in deed that the authors of this publication are oblivious of the fact that an audit of a company is not done by one single individual but a team of about five persons to wit the Audit head, Audit supervisor, Audit senior, Audit Assistant and Office manager. To therefore try to unjustifiably drag the name of a Senior auditor at the Osu Branch

of GRA, who rather deserves accolades for serving his motherland with distinction , into the mud - because he has been called upon by his people to lead them is revolting to say the least.

Is it not also curious that a publication which is bent on unearthing acts of corruption at GRA is rather interested in the one who "influenced" the audit and not those who performed the audit?

From the foregoing, it stands to reason that the entire publication is a hoax that is not only intended at throwing dust into the eyes of the public but also purposed at denigrating the hard work and sacrifices of the staff of the OSU Branch of the GRA !

This is the inordinate and ridiculous lengths some politicians can go just to be able to annihilate a potential political threat.

In conclusion, it is my well considered opinion that delegates are going to elect a candidate who has demonstrated unalloyed love and dedication to the course of the party and who has shown through his deeds in the past a desire to help lift his people out of grinding poverty - and not the one who is only good at running down his opponents. It is patently clear in Navrongo that Mr Sampson Chiragia is way ahead as far as love for party and fellow feelings for the constituents is concerned .

This time around agents provocateurs of the Devil have no place in Navrongo politics.