I Am Vouching For The Trump Card 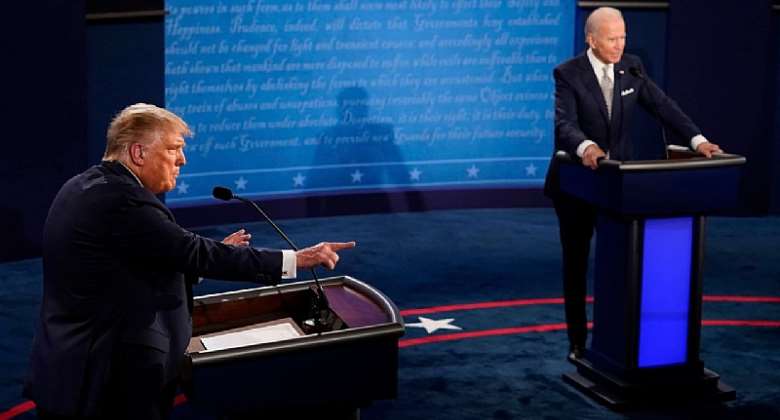 Yesterday, the whole world was glued on various Media networks to catch a glimpse of the Presidential debate between charismatically blunt Donald Trump versus cognitively senile Joe Biden! Were there calls on Biden to do a cognitive test?

Prior to the event, notwithstanding a well-orchestrated media contrivance to give the proverbial dog (Donald Trump) a bad name in order to hang him: nobody gave sleeping Joe a dog's chance in hell in this Presidential debate. At least not in their conscience. Not even the fake news conduits!

Old Joe is just media work! His support base was just hoping against hope that maybe, just maybe, Joe may pull an upset. It was the prayer of all Democrats on Joe's campaign trail that the benevolent one injects Biden with one of those rare bouts of consciousness that keeps appearing and disappearing willy nilly.

And the prayer of the overzealous and ardent supporters of old Joe that he doesn't slip into his usual fevers of incoherence and mental befuddlement!

However, all these wishes weren't horses! Donald Trump stole the show - in fact, he was the cynosure of attraction as he very eloquently defended his track record and inimitable leadership! Brimming with characteristic confidence Trump lucidly espoused the roadmap he has for America.

I have heard the weird and wild claim by People that Trump is rude and bullish; who said the presidency is a monastery!

My cut I have taken away from this presidential debate and the Trump factor is that the world has become so cowardly that she fears to call things by their right names and anybody who dares stands out and says things, as they are, is often assailed by an avalanche of criticism and name-calling!

We need many more Trumps if this world is to revert to its timeless ideals of truth, candour, and honesty! The world's problems will never get away if we continue massaging around issues instead of attacking them head-on!

The Fixation of the world on political correctness is the bane of our times!

The foregoing, nonetheless, I believe Joe Biden deserves accolades for agreeing, even if timidly, to debate Trump! It is a mark of statesmanship!

Americans are lucky that both Trump and Joe agreed to debate, aren't they?

In faraway Ghana, a debate doesn't seem likely since one of the leading presidential candidates, who is touring the country with his Presidential chair, has stated with a stiff upper lip that he is not debating anybody!

##My bet is on the Trump card to win with a resounding majority.