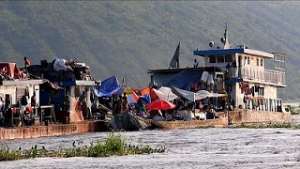 "Ebola has nothing to do with bush meat or bats it's a bio-warfare agent. We want the minister of health to tell us the real cause of this Ebola. As long as we have not heard the real cause, we have no choice but to believe that it was produced in a laboratory and then distributed among the population”

Alongside the Congolese borders with Uganda, the Ebola patients refused treatment of the healthcare workers of the Centers for Diseases Control CDC and fled from the town of Mbandaka towards Uganda.

The canoeists are literally roasting bushmeat at the outlet of the ship. In Mbandaka, a city in Congo where 1.2 million people live, many patients with Ebola have already died and yet the real outbreak hasn't even started yet.

The danger of further spread is lurking. In a short time, 167 people have died in the country from the consequences of contamination with the deadly virus.

The review determined that CDC officials could not return to areas where militant attacks threatened security, including Beni. But the main reason is CDC officials will be shot as it happened in Libya because not only ordinary people became aware of Ebola biowarfare trials but politicians as well.”

State News first reported on October 14 that the US had pulled out of the area. Why did they pull out? The only way we can think of is Donald Trump gave this order because he knows Democratic Republic Congo health workers fighting against the Ebola outbreak are not winning.

Besides that, he also knows who is the developer of this killing virus and Congolese politicians become more and more aware of that. According to a Congolese politician, Donald Trump knows who fabricated the biowarfare Ebolavirus and now pulls out to see what happens in an Ebola-stricken war zone to study how to handle the aftermath.

The World Health Organization (WHO) is very concerned about the speed with which Ebola is spreading in the Congo. “We fear that the situation will become uncontrollable.”

The highly contagious and deadly infectious disease has spread from the Congolese countryside to the cities and most certainly will spread to other countries as well. It's just a matter of time...

Meanwhile, according to WHO, the experimental vaccine called rVSV-ZEBOV has shown to be highly protective against Ebola virus infection. The WHO says there is not enough valid research to risk the health of pregnant women nor their future child.

Since the last Disease Outbreak News (i.e. during 16–23 October), 27 new confirmed cases were reported. Of the newly reported cases, eight were known contacts of previously confirmed cases at the time of reporting, two were linked retrospectively to transmission chains, and 17 remain under investigation.

A health worker from a community health post in Beni was among the newly infected; 21 health workers have been infected to date, of whom three have died.

Risk of the outbreak spreading to neighbouring countries remains very high with ongoing transmission in communities in North Kivu.

Enhanced efforts are needed to ensure areas beyond the main affected health zones are prepared and operationally ready to rapidly detect, investigate and respond to any such exportation of the virus.

Over the course of the past week, alerts have been reported from Rwanda, Mauritania, South Sudan, Sudan, Uganda, and the United Republic of Tanzania.

So Donald Trump is leaving the Ebola war zone and all the institutes depicted below behind. And Trump most certainly knows why they are losing the Ebola biowarfare game. COWARD...,

We are waiting for the first Congolese politician who is aware of the International Criminal Court in The Hague and it's about time to bring a white biowarfare war criminal to the court.

The World Health Organization partners in the Democratic Republic of Congo Ebola response include: