The Covid-19 Can Never Be A Natural Virus 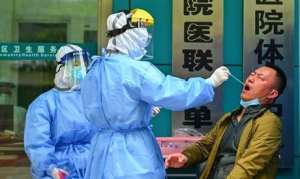 It doesn't make sense at all if the US intelligence tells or wants to convince the world that the coronavirus is not a biological weapon but natural. If they can't speak the truth they must shut up, that is better than lies and deceptions.

We have said it before that America is under leaders that neither repent of its crimes nor reject sins. Since they consider repentance and forgiveness a failure, they will always come out with deceptive publications hoping to be accepted by the general public.

The prevailing opinion in the US intelligence services is that COVID-19 is not man-made, but a natural coronavirus endemic to some species of bats found in China, the American defense publication Military reported.

The coronavirus is indeed a biological weapon which was revenge from China against America since the US government has been involved in several biological weapons, such as HIV-Aids and Ebola against humanity but this is a fact they can't speak about it.

According to them, it is likely that the virus was not intended for military purposes.

The ongoing research at the Wuhan Institute was part of a broader effort, partly funded by the US and Canadian governments, to study the pathogenic microorganisms of the coronavirus, which involved several research institutes.

"However, the enormous human and economic damage caused by the virus has shown how powerful biological weapons this coronavirus and other pathogens can be,” the newspaper notes.

At the same time, it is emphasized that the United States can survive, albeit with huge economic losses, the COVID-19 pandemic, but their succession with periods of several years will devastate the American economy and deprive the United States of the status of great power.

It is also noted that this prospect is taken into account by the enemies of the United States.

American experts note that COVID-19 has demonstrated the deep vulnerability of the United States and the whole world to such pandemics that may recur in the future.

This fact, and the realization that such outbreaks may recur, will have a serious impact on US national security issues and will be an important factor in determining and shaping what the new normal post-pandemic period will be like, American experts say.