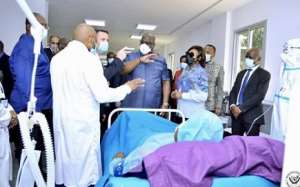 Highly publicized cases of fabrication or falsification of data in clinical trials have occurred in recent years and it is likely that there are additional undetected or unreported cases.

Deviations from these principles may generally be considered scientific misconduct or fraud, although the US Public Health Service defines research misconduct more narrowly, restricting it to the most egregious practices.

There is reliable scientific evidence that data fraud, the deliberate fabrication or falsification of data, is a common occurrence in clinical trials.

Moreover, in multicenter clinical trials, fraud perpetrated is very likely to affect the scientific conclusions of the trial. However, whatever the true incidence of data fraud in clinical trials, high-profile cases there is evidence that it does occur regularly.

Especially in Africa, it is important to have procedures in a place to identify potential cases of fraud as early as possible during the conduct of the trial so such cases can be investigated and resolved before damage has occurred.

We all know how corrupt African leaders are and how they are bribed in order to allow dangerous vaccine trials, especially during this Covid-19 and Ebola era.

Since the latest outbreak of Ebola in the DRC, at least 48 people have died from 113 confirmed cases. However, the remoteness of the area means great work and financial assistance is needed.

The World Health Organization (WHO) is increasingly concerned about Ebola spreading from Equateur to the neighboring nation of the ROC. Thus, screening is taking place to prevent the spread at special strategic points.

Voice of America reports, “Bomongo, the latest area affected by Ebola, is located between the Ubangi and Congo rivers. It is the second health zone to be affected that borders the Republic of the Congo.”

The World Health Organization is raising the prospect that the deadly Ebola virus in the Democratic Republic of the Congo’s Equateur province could spread across borders and beyond.

The World Health Organization warned that this increases the chances that the outbreak could spread into another country. WHO spokeswoman Fadela Chaib told VOA the risk was heightened because Mbandaka, the capital of the Equateur province also is affected by the outbreak.

The WHO says the virus is continuing to spread and is already in 11 of the province’s 17 health zones. This is of particular concern because of the difficulty of reaching affected communities in the geographically vast area.

WHO Director-General Tedros Adhanom Ghebreyesus says there currently is a delay of about five days from the onset of symptoms to when an alert about a suspected case is raised.

This latest Ebola outbreak is unfolding amidst the COVID-19 pandemic. As of last Friday, there were more than 10,300 cases and 260 deaths across the vast African nation.

While there are several similarities in addressing the two diseases, such as the need to identify and test contacts, isolate cases and promote effective prevention measures, Ms. Chaib stressed that without extra funding, it will be even harder to defeat Ebola.

Development Of A Multinational Vaccine Factory

Typical vaccines for viruses are normally made from weakened or killed viruses, but the one they developed now is an mRNA vaccine, which is not made from a Covid-19 virus, dead or otherwise.

Instead, the vaccine included a segment of messenger ribonucleic acid, or mRNA, that would hopefully prompt some cells to make a viral protein, which could set off an immune response — and make the body produce antibodies. It was all new — such a vaccine had never been tried before.

The latest Chinese Ebola Virus Vaccine report has been segregated based on distinct categories, such as product type, application, end-user, and region.

Each and every segment is evaluated on the basis of Compound annual growth rate CAGR, share, and growth potential. In the regional analysis, the report highlights the prospective region, which is estimated to generate opportunities in the global China Ebola Virus Vaccine market in the forthcoming years.

This segmental analysis will surely turn out to be a useful tool for the readers, stakeholders, and market participants to get a complete picture of the global China Ebola Virus Vaccine market and its potential to grow in the years to come. Yes..., vaccines for Ebola and Covid-19 are big business...

Highlights of the Report

The main question is why Ebola epidemics always strike in Africa, especially in the DRC where vaccine trials are the order of the day. Let's face it, in order to develop a vaccine industry you need to have patients for experiments and corrupt regimes can likely allow China and others to use their citizens as guinea pigs.