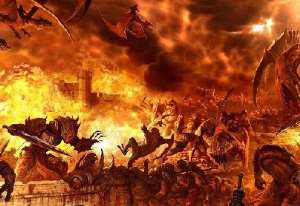 If anyone thinks this world will be a better place for everyone to have enough peace, security, and happiness, then those who are looking for that will never have them because the world is in the hands of dangerous and greedy politicians, that gamble with the lives of the people.

They have no conscience, integrity, and remorse because they are only after one thing, that is 'power.' If the need to kill for that power is necessary, the politicians will do it. There is no truth in any part of the world because of the wickedness of politicians.

They kill and reduce the population with diseases and biological weapons and they lie about them, yet some people support their lies and crimes. They bring curses upon themselves since they take hold of the bible to swear and kill at the same time.

Nobody is prepared to speak the truth and the few that have risen to fight for the truth become enemies and often killed. This is the type of world we are living in the hands of dangerous evil criminals they call themselves politicians.

Look at what is happening in America at the moment. Nothing is getting better in that country but it will not stay there alone. That political instability will definitely spread to the whole world because for decades they support the crimes of the US government.

When HIV-Aids biological weapon was triggered on African populations before the spread, advanced countries supported the crimes of the US government that monkeys are responsible. The same applies to Ebola, that bats are responsible.

If people have eyes they can clearly see that those countries that for decades are supporting the lies, deceptions, and crimes of the US government, were those that were devasted by the coronavirus.

Many countries don't care much about Africa, the reason it's the only continent that has suffered slavery, colonial brutalities, Apartheid, and medical crimes but this time they cared about the coronavirus because what goes around comes around.

Instead of fighting to save the lives of victims of COVID19, they rather find it necessary to suppress information and removing articles from our blogs because they are exposing them.

However, we feel happy about it that our articles are giving them nightmares the reason they have declared war on them.

"This world is like a mirror reflects and what do and if you face it smiling, it will smile right back to you, so do to what to others as you will have them do." - Joseph Culture Hill.