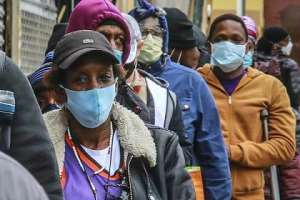 The Coronavirus in America has killed more people than during the Anglo-American War, the Gulf War, and several other military conflicts not including the First and Second World Wars. The data was cited by the US Department of Veterans Affairs.

In total, almost 5,746,534 million people were infected with COVID-19 in the United States and already over 794, 000 people have died. At the same time, African Americans are more often victims of the pandemic in the country.

This is not a situation one can explain that black people are more susceptible to infection than white Americans, the reason the disease has killed more African-Americans but the result of poverty caused by decades of racial discrimination.

Access to health care is difficult for many African-Americans. Not all of them have health insurance, so those that do not cover all costs, are likely to die during a pandemic.

When Ebola occurred in West African countries of Sierra Leone, Guinea, and Liberia in 2014, the US government closed down all connection of air flights from those countries and neighboring countries, yet the government couldn't control the COVID19.

Speaking at the White House, Donald Trump showed concern to the high number of coronavirus deaths associated with African-Americans.

"We are doing everything in our power to cope with this disaster, this is a huge problem. It's horrible. Why is this coronavirus pandemic three, four times more likely to happen to blacks than others? There is no logic in this. I don't like it," said Donald Trump.

In the past weeks, the United States has carried out the maximum number of tests to detect coronavirus. The results showed that the majority of cases of COVID-19 and deaths from the virus are African Americans.

What is more disturbing is the devastation of HIV-Aids among black people in both Africa and the United States of America at the same time.

For example, in Milwaukee, out of a thousand people infected, 81% are African Americans, although there are only 26% of them in the city. Similar data are given to other cities and states.

In Louisiana, blacks make up only 32% of the state's population, while 70% of all deaths from the pandemic in this state is African Americans.

African American Mayor Laurie Lightfoot said the data "provides new insight into the spread of COVID-19 and is a serious reminder of deeply rooted problems in the country."

According to Jerome Adams, doctors have concluded that "black Americans are at a greater risk." Together with the head of the American Medical Association, Patrice Harris, he recommended that "special attention be paid to race and ethnicity."

As a microsurgeon, what I have studied is black people rather have a strong immune system able to resist diseases than whites, so I can't explain what is behind the deaths of thousands of African-Americans, even if they have been denied medical opportunities.

It's totally rubbish to say that black women are more likely to die of breast cancer than white women. That's a scientific tautology.

The scientific world is full of lies and deceptions that many easily believe in them than the truth. I will, therefore, end my article only to say that "God only knows the truth behind the deaths of thousands of African-Americans by COVID 19."

REVENGE: A lady got pregnant by her sister’s husband who was...
47 minutes ago