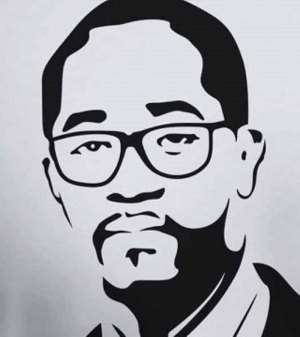 I got some numbers from my good friend Dr Theo Acheampong and spent all night trawling through the numbers just to make sense of the jazz flying all over the place on social media.

So we want to use the Heritage Fund to support free SHS et al. Money from Ghana’s petroleum revenues are usually split in 4 – contrary to the numbers flying around, up till 2015, we had made a total of $3.2Bil. of that amount, 43% was allocated to funding our Budget every year (it means we chop am); 30% was used to fund GNPC ($970mil); 19% was used to fund the Stabilisation fund and only 7% was put into the Heritage Fund ($249mill) in total. In 2015 when the Oil prices tumbled, there was not a lot available from Oil sales to put into all the 4 funds. Now you would have thought an Equitable government would have reduced the allocations by equal margins right? WRONG. The allocations for the Budget, and GNPC were only slashed by 30% and those for the Heritage and Stabilisation by 94% - says a lot about how we Value the stability of the economy and the future of our Children innit?

These are the amounts that were allocated, NOT the amounts available now (obviously after the allocation, they have been chopped small small hehe – this is Ghana abi?)

The Heritage fund is in a layman’s term a fund set aside for the future generations and the youth of today. Reason? Because by the time they would have grown into maturity, we the adults today would have used up a lot of the Oil reserves and so, we put some of their share aside so they can start off with something.

Now we want to use whatever is left of the Heritage Fund to pay for Free Education. Mind you I have no problem with FREE education. But morally, its like saying “Kwesi is 17years old. His son (20years from now) and his grandson (47 years from now) should altogether PAY for his FREE education. The assumption is that we are going to make more money from Oil to replenish the Heritage Fund. Well guess what? Since 2014,our oil revenues have been falling 2014-2015 by 50%+, 2015-2016by 31% (with provisional 2016 amounts). USA is set to overtake Saudi Arabia to become the world’s leading oil producer by 2020 and, together with Canada, would become a net exporter of oil and guess who they will export to – the very countries WE export to China, Korea, Europe after all they are G8 allies; consider the fact that we still as a country import crude and refined oil; consider that with accelerated shale oil and gas production techniques spreading and technological advances to minimize the use of oil, prices are not going to be pretty in our favor.

So my question is this: Over the Long term, how is the future of the next generation (via the Heritage fund) going to be refilled and sustained? Is this fund the only source from which FREE education can be financed.

There is still MASSIVE waste overspending on public sector Personnel costs – why is it NO government wants to touch this? And yet that’s where the bulk of where our revenues as a nation goes – paying public sector workers who drive cars, live in bungalows, read newspapers all day and attend funerals on Fridays. Yet we think its OK to continue funding them whilst robbing the savings of the future generation? Sometimes I wonder – how do international companies with 3-5 times our annual GDP run their companies so efficiently with less staff than our public workers and yet according to the Economic Complexity Index (ECI), we are just the 122nd most complex economy in the world.

Why aren't we funding FRee education from Cocoa proceeds, or Gold proceeds considering that we still have policies in place that have allowed many mining companies to start mining for years without paying matching compensations to the communities. Why can't we mop up the waste in the system to fund FREE education. Why should GNPC be allowed to be using its share of revenues to sponsor sports events and yet we find nothing wrong with using the meagre funds being saved for the future generation. Doesnt it mean anything to us that as things stands and with our debt levels, any and every child born into the Ghanaian society will be born with a debt on their heads? Aɖɛn, bɔni bɛn?

Leave the HERITAGE Fund alone. The fact we and the generations before us havenot managed to create any economic heritage for ouselves does not mean we should deny our young and unborn generations theirs - that is wickedness.