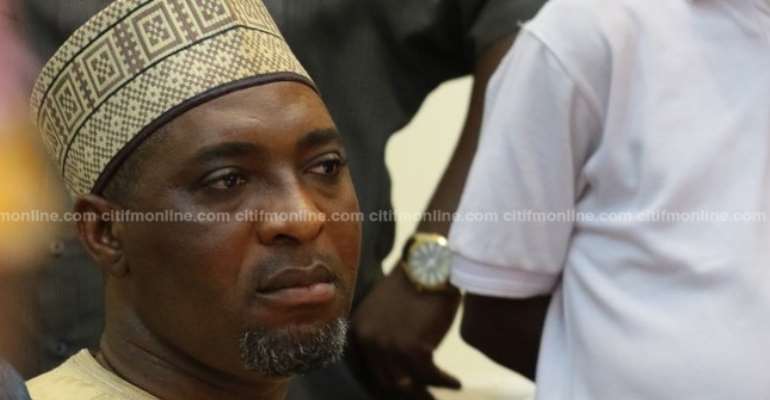 According to him, he does not recall ever giving Ayariga any gift purportedly from the Chairman of the Appointments Committee [Joseph Osei-Owusu].

The Bawku Central Member of Parliament in an interview on Accra based Radio Gold on Friday, alleged that he received an amount of GH¢3,000 from the minority chief whip alleged to be from the Energy minister, Boakye Agyarko through Joseph Osei-Owusu.

According to him, Mr. Agyarko wanted to bribe the minority side after he noticed they had kicked against his approval as a Minister for Energy.

He explained that they had earlier confronted the Chairman of the committee about their sitting allowance hence when the money was given them, they thought it was to cater for the purpose.

“Some members raised some rumours going rounds in the House that Agyarko brought money and we approved him. He [Muntaka] promised to check and when he checked he said chairman [Joseph Osei Owusu] confirmed that it was from Agyarko and we said we don't want Agyarko's money. So we returned the money to our Whip and asked him to return it to our Chairman,” Ayariga said.

But denying the claim on Joy FM's Newsfile program on Saturday, the Asawase legislator, Muntaka swore to have no knowledge about the claims of Mahama Ayariga.

“I'm a Muslim and Ayariga is a Muslim. I'm swearing by the Allah that created him and I never gave Ayariga anything and I said it was from Osei-Owusu and Osei Owusu has never discussed any money issue with me. He has never given me any money to be given to Ayariga and I've never given Ayariga or anybody any money saying that it was coming from the Chairman.”

Muntaka suggested that the leadership of Parliament should take up the matter and thoroughly investigate it to ascertain the truth.

“I think that the leaders have to take this thing up seriously. I don't know where Ayariga is having this information that he is purporting,” he said.

'Osei-Owusu challenges Ayariga'
The Chairman of the Appointments Committee in an interview on Citi FM's The Big Issue denied the allegations by Mahama Ayariga saying he had not given money to any Member of the committee as bribe to facilitate Mr Agyarko's approval.

He said he was considering a legal action to clear his name from the allegation.

'Parliament denies bribery allegation'
Parliament in a statement on the matter signed by its Director of Public Affairs, Kate Addo, said the allegation is untrue and baseless.

The statement said, “parliament has noted with grave concern, allegations that the Leadership and Members of the Appointments Committee have been bribed by some of the President's nominees to facilitate the recommendation of approval of their nomination as ministers to the House.”

“Parliament will like to state categorically and without any equivocation that these allegations are frivolous and vexatious, and should be discarded. Parliament attaches a lot of importance to its constitutional duties and abhors practices that will not only affect its work but also bring the institution into disrepute. Therefore extreme care is taken and thorough background checks are made before chairpersons to the various committees are appointed.”

“This is to ensure that the works they oversee are meticulously carried. Parliament will therefore like to state that no such event has taken place and anybody having any information to the contrary must resort to the laws of the land and take the appropriate action for redress,” it said.

No petty trader will pay income tax in my next gov't — Maham...
25 minutes ago