I Am Mad About Judiciary Madness! 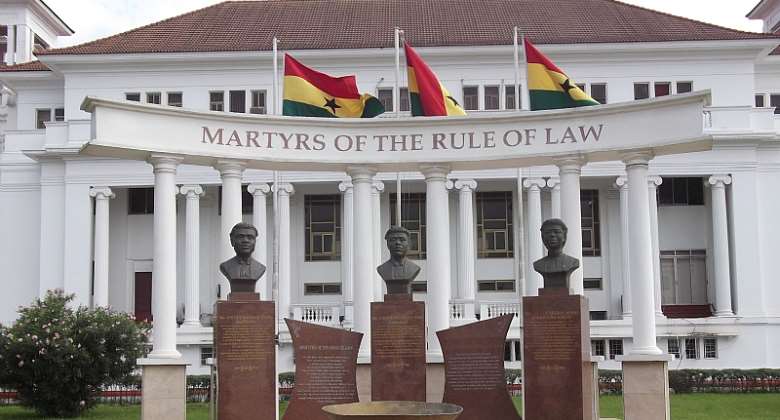 I am and I have been an ardent advocate of lawful procedure and processes of law. Right from legon as a brand new first year student I couldn't resist my intuitive inclination to stand up against what, in my estimation , was grave injustice. Not even the authoritarian,highhanded and repressive leadership style of the University of Ghana authority could tame this intrinsic soul. In fact, my aversion for injustice seems to be innate. It is instructive to note that the relationship between the authorities and the students in Legon is like the Bully and the Bullied so much so that student activism is tantamount to belling the cat. Academic freedom is virtually stifled to strangulation. Opposing University policies can fetch you a contrivance of rustication.

Yet, under this totalitarian set up yours truly remained unfettered and undaunted . I opposed obnoxious and hostile legislations emanating from the university authority with a vehemence ! I led the impeachment, of perhaps more students' leaders than any other student who passed through the pearly gates of legon , anytime they stood against the overarching interest of the entire student body. I led several legal students demonstrations in legon to pave the way for fairness and justice to prevail. I cannot fail to recognize the contributions of my contemporaries like Samuel Okudjeto Ablakwa, Lord Hammar, DN Ofori Atta and several chief Vandals like Chief Shaban for the same course of ensuring the protection of students' rights .All these was done in consonance with and under the ambit of the law !

I am recounting this trajectory to establish that not withstanding the draconian climate in Legon I never succumbed to injustice from on-high and I did that through the legally laid down channels. Yet the authority did not take kindly to this and I had my share of the raw deal which is often doled out liberally by the powers- that- be to any student who drew their ire . Can you imagine that the University of Ghana, which is inundated by so many legal luminaries have no modicum or scintilla of respect for laid down legal processes and procedures? This accounts for the cornucopia of ignominious court debacles of the University.

One would have thought that a prestigious University like Legon would stop witch hunting student activist and muzzling free speech and academic freedoms.

Permit me to aver without mincing words that concepts as injustice, Justice ,procedure, processes , law , jurisprudence, constitution are neither unfathomable to the average Ghanaian nor are they comprehensible to only the lawyers , judges and the whole rigmarole of the judiciary chain. In fact , any person with a smattering of education and who is capable of reading and writing should be able to get to grips with the issues of law. After all , most, if not all the originators of the foundations of law and legal thought were not members of the legal fraternity yet they defined the parameters and domain of jurisprudence .

It is crucial to reiterate that Law as a concept is not defined , appreciated,understood by solely the judiciary. It is not the preserve or sole turf of the judiciary,it is intrinsically human to be legal.

It is therefore highly presumptuous and indeed hypocritical for judges to pooh poor the rest of us with deliberately obfuscated verdicts from their Ivory Tower of sacrosanct learnedness !

To say that I am discombobulated by Sophia Akuffo's judgement would be tantamount to stating the blatant obvious. I am cocksure that, with the benefit of hindsight , she should be drenched in shame for erring so egregiously in sentencing the Montie trio to prison terms. Every sane soul should feel apprehensive and befuddled by the creeping judiciary dictatorship in the guise of verdicts and constitutional interpretations and the rule of law! Recourse to chapters and clauses of the constitution or quoting copiously from legal authorities in the passage of judgements does not necessarily guarantee fairness and justice. I think Shakespeare captured this sentiment more succinctly when he said in his book the Merchant of Venice that " the Devil can cite scriptures for his purpose".

In fact, no argument can assuage my evidence based suspicion that Sophia Akuffo's judgement was politically motivated. I am not putting this suspicion down to merely her legal connection to the NPP flag bearer and for that matter the NPP : but the nature of the sentencing and its unhidden intention to make the trio ineffective for the most significant part of the electioneering campaign cannot be coincidental but premeditated!

To me , the discretionary power which is invoked in passing judgements in contempt cases, must have precision. Sophia should have been abreast of the fact that discretion goes hand in hand with responsibility, precision and fairness to all. This legal truism has been captured succinctly by Aristotle in his assertion that " Injustice arises as much as from treating equals unequally and as much as from treating unequals equally ".

This quotation clearly enjoins those who seek justice and fairness to treat those who offend the same law, equally. Permit me to use a simple illustration to drum home the purport of this Aristotelian quotation. If A is convicted to a prison term of 7 years for stealing a bicycle, the expectation is that if B is convicted of the same crime of stealing a bicycle he should be sentenced to 7 years. In the same vein if A is made to pay a fine for the crime , the same should hold true for B. This ,to Aristotle ,is justice and fairness, anything short of that amounts to grievous injustice!

Let us advert our minds to the instant case of the incarceration of the montie trio for contempt ,against the backdrop of the Aristotelian conception of justice and of course against the the background of similar cases .

During the needless and gratuitous election petition case at the supreme court , a spree of cases of contempt emerged . In fact, similar , if not worst statements were made by the general secretary of the NPP, Sir John and his ilk yet they were made to laugh home after paltry fines were paid. Why weren't the Montie trio, in fairness, subjected to a similar fine ? We were all witnesses to President Kuffour's Judiciary meddling and how he packed the judiciary with Judges and Lawyers of NPP extraction. If this notion of intrusion was only suspicion , the capriciousness of judgements, in respect of contempt cases , is beginning to lend credence to the perception that we are contending with an NPP saturated judiciary.

Candidly ,I am not prepared to allow the contents and character of my thoughts as reflected in my speech to be determined, shaped and controlled by a judiciary that had over 30 of its members exposed for stinking corruption.

To tell you my mind, I have the intuitive feeling that if Sophia Akuffo had been part of the judges that Anas made the bribery overtures to, she wouldn't have had the opportunity to sit on the instant case.!

If the intention of the judiciary by being harsh on the Montie trio is to forestall potential turmoil that could emanate from intemperate and abusive language, then why did they acquit Kennedy Adjepong of his genocidal comments on Ewes and Gas? Or is the judiciary ready to bite if only its members are involved ?

I was quite flabbergasted to hear ludicrous comments to the effect that the minister of education, the minister of gender and a host of other dignitaries should have known better and for that matter shouldn't have signed the petition asking President Mahama to invoke article 72 of the constitution to grant amnesty to the Montie trio. Since when have the usage of constitutional processes of redress like petitions become anathema?

Finally, if the rationale behind Sophia Akuffo,s verdict is to detract from the NDC's constituency through the capricious application of the law then she has misfired bigtime!