Proudhon May Be Right, But Did Bill Gates Steal His Billions? (2) 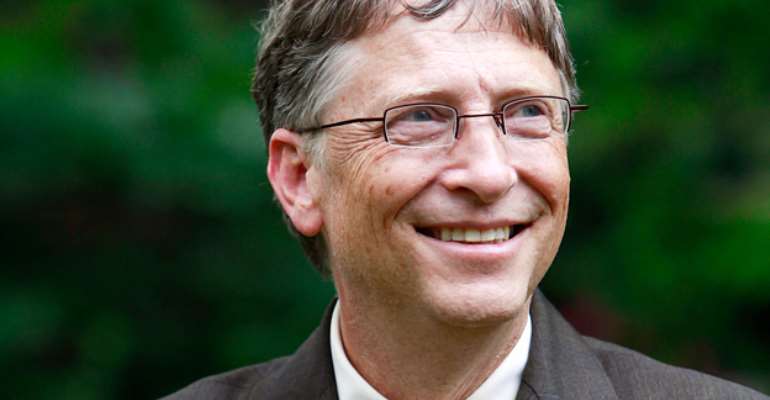 The wealth of the world is created by a few ingenious scientists, businessmen and innovators. A doctor is a special human being, but not all doctors are the same, and they are far less important than the category of people I have outlined above. Because there are army of people with incredible memory and dexterity to master the discipline. On the other hand, among the doctors there comes along, once in a while, rare personalities like Christiaan Barnard, Dr Ben Carson and many more who literally change the goal post to enable them score from any angle. The sort of knowledge and skills that Carson and Barnard needed to accomplish what they achieved is enormous. However, you ask yourself the question how many people need a heart transplant or come to this world conjoined to the head? Their exceptional accomplishment is a dose of inspiration for those who come after them to achieve the impossible.

However, a scientist like Thomas Edison, who invented the lightbulb, is immeasurably more important than the average doctor. The fact is Edison, bar a few who live in the jungle and, yet to see a lightbulb, has touched the lives of billions. Assuming this man is living today and he is rewarded with billions of dollars why will anybody complain about that. Well, the progressives think there is something wrong with this way of allocating the wealth that the intelligence of Edison has created.

What these progressives will have to realise is that without the intelligence of Bill Gates, the efforts of all those who helped him to create the trillions will not matter. Because that wealth will never have materialised. Nonetheless, people lose their head for the fortune he has out of what he has made tangible. He is the invaluable jigsaw that makes the picture complete and perfect. Wealth is an incentive for the creators to generate more of it. When J. K. Rowling writes her blockbuster stories the wealth she creates is enormous. It starts from the person who does the proof reading, the company that does the printing, the advertisement, the film adaptation and the trail is endless. She is, therefore, rewarded with a huge cut of what her creativity has wrought and people get angry. Of course, the printer and his workforce applied a lot of time and energy to produce the books, however, without the brainpower of J.K. Rowling their effort is inconsequential.

So this is my advice to Mark Goldring and his cohorts; the best way to curtail Bill Gates, Zuckerberg and the rest from appropriating for themselves the wealth of the world is to stop using their products. There are other computer operating systems and thousand and one social media websites. Why do many people stick to Gates and Zuckerberg to make them so rich? The answer is obvious; they want the best. How many people uses Facebook compared to Twitter? The huge volume of usage translates into dollars. I believe the chief executive of Oxfam used a Microsoft programme to write his report. He equally added to the wealth of Gates. He had the choice of using another software like Linux, but his desire for the best gravitated him toward Microsoft. It was a selfish choice that made Gates richer. So I think in my humble opinion he will do well to stop making empty noises and enjoy the priceless value these people have added unto our lives.

Looking at the other side of the coin, the wealth of these 62 people do not sit in their private vaults; they are kept in commercial banks, in stocks and other investments, which creates more wealth. Instead of them to think about how to create more wealth with it in order to increase the size of the pie, what they are worried about is what these 62 people have got. The world is not a fair place. What is the difference between Bill Gates bequeathing his wealth to his heirs and Kobe Bryant being born with incredible talent, which enables him to command tens of millions of dollars a year? What about Usain Bolt, Ronaldo, Asamoah Gyan who earns in excess of £11.8 million a year for just kicking a leather ball. In the same industry, that people like Gyan take home very huge salaries that make a lot of people uncomfortable, there are players who literally scratch for their daily bread. Why is it that? And the answer is simple. We all want the best; nobody wants to see the village champion playing, but Gyan, Cristiano Ronaldo, Messi etc. How many people take keen interest in the local football league like it used to be 30 years ago. I was surprised the last time I was in Ghana the way people were trooping to joints that telecast the Barclays Premiership. It was unbelievable; it was as if the local league doesn’t exist. So, is it right to turn around and complain about the poor remuneration of the local players compared to the £15 million Ronaldo received last year when all that we want is to watch the Bundesliga, Serie A or La liga not to mention the Barclays Premiership.

The wealth of the 62 billionaires serves as the reserve capital of the world one way or the other. Where does the money from the IMF and World Bank loans come from? What the chief executive should be concerned about is what the leaders of the 3.6 billion population of the world do with the loans these institutions give out. They use it to finance sanitary towels for girls. And you have very intelligent people writing position papers to defend this bonkers. Of course, the rest serve as piggy bank for their Swiss bank accounts and prestigious investments like Ghana Airways that did not have enough passengers, at the time, to make the investment worthwhile.

When the next form of energy comes along this is the capital that will provide the resources for the R&D. However, they will conclude that it is going to make them richer, which is very unprofessional route of analysis. What they have to digest is the energy bills of the poor that will be slashed, and this is more important than billions that will flow into the accounts of the innovator. The poor who will not have to turn off their heater in the dead of winter, besides paying cheaper prices for their food, because the cost of production has been reduced.

Now, Bill Gates donates almost half a billion to fight malaria, if you emasculate everything from him where is the capital going to come from to fight this deadly disease? Is it going to come from the various governments of the endemic countries who only know how to embezzle public funds? The government of Ghana cannot even stop the ghost names that has infested their payroll let alone look for money to finance a project to eliminate malaria.

All that these progressives know is to talk and write about meaningless issues that does not produce a single dime for the poor. Yet, they whip the emotions of the masses to uncontrollable anger and the trillions of wealth that Gates has created for the world is lost in a sea of ignorance, and what people care about is the few billions that is reserved for himself. That is pity and petty.