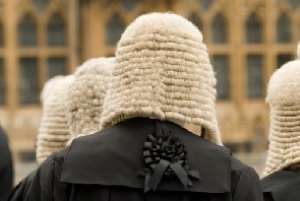 Accra, Sept. 11, GNA - Some of the judges implicated in the said corruption tape from Anas Aremeyaw Anas, an Investigative Journalists, have resorted to the Fast Track High Court to challenge the process leading to their suspension.

In a writ of summons issued by Charles K Bentum, on behalf of the 14 plaintiffs it said the disciplinary proceedings by the Judicial Council (JC) against them were contrary to law and or due process.

It said the panel constituted by the Chief Justice to institute disciplinary proceedings against the plaintiffs has no legal basis and therefore is null and void.

It said six out of the 14 judges are circuit court judges while the remaining eight are district magistrates.

According to the plaintiffs, the letter to each of them from the JC which asked them to respond to the video was dated September 4, but was delivered to them on September 7, barely 24 hours after they were expected to respond.

The plaintiff stated that notwithstanding that the report had not been made available to them, they were nonetheless directed to respond individually to it not later than September 8, adding that they were also asked to appear before the disciplinary committee of the Judicial Service on September 10 to answer the allegation of bribery made against each of them.

They contend that they were entitled to be informed whether the proceeding against them, were summary or formal in accordance with the law.

Mr John Ndebugri, addressing the media on behalf of the Plaintiffs said procedure is very important so far as the delivery of justice is concerned.

He said judges are not allowed to interact with the media and as such analysis in the media has been one sided and their responses now would allow the issue of the judges to be heard by the public.

He said the suspension of the judges and district magistrates is in absolute bad faith saying if the JC has the mandate to dismiss, then it has to do so in accordance with the Judicial Service Act.

According to Mr Ndebugri, formal and summary procedure is different in law because they receive various sanctions, and as such the plaintiffs were supposed to be informed as to the procedure that would be instituted against them.

He noted that in imposing a penalty of dismissal, it cannot impose it on a person as a result of finding arising from a summary proceeding.

'Before you can do so after a summary proceeding, you must obtain a conviction from a court of competent jurisdiction. Proceedings of this nature must be done by a single justice of the court and not by a five member committee'.

Mr Ndebugri said the plaintiffs were not against the investigations but are insisting that the right procedures must be followed in accordance to the law, saying it is in the interest of the republic that justice must be dealt with in the right manner.

He reiterated that the plaintiffs have not been suspended because they received letters which indicated that the JC met and took a decision that each of them should be suspended after the committee has considered their responses, and suspension takes effect on September 14.