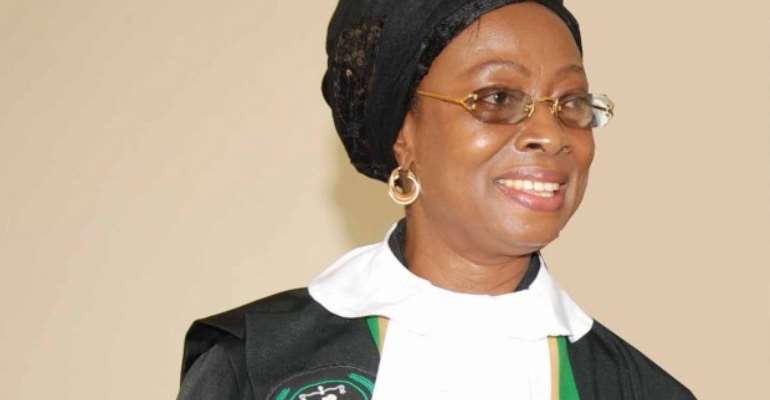 Justice Sophia Akuffo
The Chief Justice, Georgina Theodora Wood, has launched into action with the setting up of a five-member committee chaired by Justice Sophia A.B. Akufo – a justice of the Supreme Court – to investigate seven superior court judges indicted in the Anas Arimeyaw Anas expose on judicial corruption.

The other members of the panel are Justices Marful-Sau, Agnes Dodzie, both of the Court of Appeal with Nii Otoo Nartey and Kwadwo Osei Sarfo, nominated by the Council of State, completing the list.

The committee will establish the culpability of the seven judges in the bribery scandal as captured by Anas's Tiger Eye PI team.

The seven judges have been slapped with a suspension order by Vice President Kwesi Bekoe Amissah-Arthur, in his capacity as acting President of the Republic of Ghana, on grounds of stated misbehavior.

According to the Chief Justice, a prima facie case had been established against the judges who have been suspended from their duties pending the outcome of the probe.

However, the length of the probe is yet to be determined.

The Committee is expected to hold sittings for some days and submit a report to the Chief Justice who will subsequently forward it to the President for the necessary action.

The Attorney General will provide a State Attorney to assist the Committee in its work whilst a Deputy Director at the Judicial Service will serve as the Secretary to the Committee.

Justice Sophia Akuffo is considered as one of the finest jurists in Ghana's judiciary with impeccable deliveries.

She was the president of African Court on Human and Peoples’ Rights (ACHPR) in Arusha, Tanzania.

Two of the judges, Justices Paul Uuter Dery and Mustapha Habib Logoh, are in court trying to extricate themselves from the allegations and according to a statement from the Judicial Service, they will all have their days after the court battle.

Effah-Dartey
However, lawyer for one of the indicted judges, Captain (rtd) Nkrabeah Effah-Dartey, says he may sue Anas for defaming his client, Justice Ayisi Addo.

He believes his client is not guilty. 'My first impression generally was that Justice Ayisi Addo was not culpable in anyway. There was no wrongdoing; there is nothing wrong with him and I am surprised they added him to the list,' he told Citi Fm.

He explained that in Anas' video, his client did not receive any money since he sacked the Tiger Eye team from his home, wondering why he was included in the list of suspended judges. 'There is some immunity granted to him [Anas] by the President, an immunity which I believe we can challenge at the Supreme Court but it is unconstitutional and when and if by the grace of God, Mr. Justice Ayisi Addo  is cleared, we shall sit down and reflect as to whether in the interest of justice, we should not institute some action against Anas and have him punished in one way or other in terms of compensation to demand massive cost because what he has done is improper, is unethical, is immoral,' Effah-Dartey averred.

He stated that lawyers for Justice Ayisi Addo could not take any action against Anas until his client was cross-examined by the committee.

'We had a meeting this morning and the conclusion we came to was that it will be better for him to go through the mill and then listen to the decision before we advise ourselves,' the lawyer said.

He is confident that his client will be cleared. 'I read the letter from the Judicial Service to my client, and all that the Chief Justice is saying is that a prima facie case has been established against him and so he has to appear before the disciplinary committee which will go into the matter and make findings of fact. It is a determination that has been made by the Chief Justice. I don't agree with her but since she has made the determination we will appear before the disciplinary committee and they will cross examine the accusers, whoever they maybe and we are sure that Justice Ayisi Addo will be cleared,' he said.

Kweku Baako
The Editor in-Chief of The New Crusading Guide, Kweku Baako Jnr., dismissed the threat of going to court by Effah-Dartey, saying that some judges implicated had doctored their copies of the video in which they were seen collecting bribes to subvert justice.

Their intent, according to Mr Baako, was to find an escape route out of the rigorous investigations by Anas.

'Some of them [judges] think they are smart; they went to edit the video presented to them by Anas but unfortunately for them, they were exposed by the Committee…,' he stated on Asempa FM's 'Ekosii Sen' programme yesterday.

He said that they had no qualms about a suit against Anas because it is the right of the judges.

'The lawyers can go to the level of the Supreme Court but none of them will escape this,' he stressed.