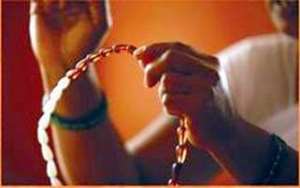 Could you ever imagine that a string of beads can act as a contraceptive device to avoid unintended pregnancies? Well CycleBeads just does that by helping women to follow the Standard Days Method (SDM)—a natural fertility awareness method of family planning. It consists of a string of 32 colour coded beads, provided with a rubber ring that can move over the beads. Even illiterate women can use this tool to keep track of their menstrual cycle to know when they are fertile and to monitor their cycle length and thus avoid unintended pregnancy.

The user moves the rubber ring to the single red bead in the string that marks the first day of her cycle. She then has to move the ring forward to the next bead every day. Six brown beads follow the red bead and indicate the non- fertile days. The next 12 beads are white in colour and represent the fertile window (days 8-19) of the cycle when she should not have unprotected sex if she does not want to get pregnant. These are again followed by 7 brown beads indicating the safe period. The next 27th bead is dark brown in colour. If her next period starts before the rubber ring reaches this dark brown bead, it means that her cycle is shorter than 26 days (and SDM is perhaps not a method for her). Then again there are 5 brown beads (the safe period). If her period does not start by the day the ring reaches the last brown bead, it means her cycle is longer than 32 days (and SDM is perhaps not a method for her).

The Institute of Reproductive Health (IRH), Georgetown University, with support from USAID, recently organised a Clinical and Programmatic Guidance on the Standard Days Method in Delhi. The meeting focussed on bringing to the fore this highly effective yet underutilized method of family planning, with the objective of expanding contraceptive choices for men, women and couples. The sessions were led by international Reproductive Health experts.


SDM is based on research that identifies the fertile window during the woman's menstrual cycle when she can become pregnant. Analysis of about 7500 menstrual cycles from a WHO study shows that women who have a normal menstrual cycle ranging from 26 to 32 days (86% women have a normal cycle) should avoid unprotected sex between days 8 to 19 (both days inclusive) of their cycle, if they do not want to become pregnant. This period is called fertile window and usually begins 5 days prior to ovulation and lasts up to 24 hours after it. This is because the sperm survives for 5 days in the woman's reproductive tract waiting to meet and fertilize the ovum that lasts for no more than 24 hours after ovulation. However SDM does not work correctly for women if they have more than one cycle outside of the 26 to 32 day range in a 12 month period.

Stressing upon the need for multiple contraceptive options Priya Jha, Country Representative, IRH, wished that all pregnancies should be planned and all births should be wanted. She informed that, “SDM is being practiced in 30 countries. Women like it because it has no side effects. It also helps them to understand their bodies and their fertility better.”

Studies conducted in India and elsewhere suggest that SDM is an effective low cost, easy to use fertility based family planning method that can be provided at the clinic or community level to address the unmet needs of contraception. The bead string needs no replenishment (unless lost or broken) and hence is very cost effective at its commercial price of INR 65 per string. 6500 such ritu malas/suraksha malas (as CycleBeads are called in India), have been sold through social marketing in the urban slums of Kanpur at INR 35 each.

Rebecka Lundgren from Georgetown University felt that we must adopt a cafeteria approach as far as family planning methods are concerned. She said that it was necessary to engage and counsel men and sensitize healthcare providers in order to promote SDM amongst those who want it. She also informed that the computer savvy women can download the application iCycleBeads for USD 3. CycleBeads are also being sold online, said Rebecka to Citizen News Service – CNS.

Results of an efficacy trial done in 2001 on 478 women (aged 18-39 years) in three countries showed that SDM is more than 95% effective with correct use and 88% effective with typical use as a contraceptive method. Of the 478 women followed during the 13 months long efficacy trials only 43 became pregnant. Of the 197 women who were subsequently followed for two years only 14 became pregnant. An operations research study done in one urban and one rural site in India found that even 1 year after the study, 75% urban Indian users and 77% rural users continued using this method. The top three reasons cited by Indian women for choosing SDM were—it does not affect their health; it is inexpensive; the partner readily agrees to it. They also felt that, unlike condoms or oral pills, they did not feel shy even if others saw the string hanging on their kitchen wall. They said it led to more visual communication between the couples—husband would buy (or not buy) condoms just by looking at position of the rubber ring on the beads.

Leading gynaecologist Dr Suneeta Mittal rued the fact that in India family planning focusses on permanent methods such as tubectomy, vasectomy, contraceptive pills and IUDs, while traditional methods such as SDM get much smaller attention. Yet only 2%-3% people use IUD and contraceptive pills in India. We need to expand our basket of choices. No one method fits all, so it is essential to have a method mix to ensure that children are born by choice and not by chance.

It would be interesting to note that a staggering 222 million out of 867 million women of child bearing age in developing countries do not have access to modern contraceptive methods. According to the National Health and Family Survey 2005-2006 (NHFS 3), the current use of contraceptive of any kind in India is 56% out of which 37% is female sterilization, 5% is condom use and a mere 1% is male sterilization. These figures speak volumes for our patriarchal society where men still not feel responsible enough of becoming active partners for planned parenthood.

The main idea behind promoting this new method of family planning is that all couples must have access to quality reproductive health and family planning services, irrespective of their social and economic status. Women who know a range of contraceptive method options and are well informed about the side effects and problems associated with them are in a better position to make an informed choice about family planning methods. According to Reproductive Health Specialist Dr Douglas Huber, “We have done a lousy job in letting people have basic knowledge about their own body and reproductive system. Sometimes we forget to do simple things like SDM, in the face of modern technology. SDM has no side effects, is very cost effective and engages men in optimal birth spacing and timing.”

Although World Health Day 2013 is focused on hypertension, we must not forget that family planning is an integral component of Maternal and Child Health. Women need to take control over their own body and reproductive health and have access to multiple contraceptive options with a view to space and limit their family in the interest of the wellbeing of themselves and their children.

Shobha Shukla, Citizen News Service - CNS
(The author is the Managing Editor of Citizen News Service - CNS. She is a J2J Fellow of National Press Foundation (NPF) USA. She received her editing training in Singapore, has worked earlier with State Planning Institute, UP and taught physics at India's prestigious Loreto Convent. She also authored a book on childhood TB, co-authored a book (translated in three languages) "Voices from the field on childhood pneumonia", reports on Hepatitis C and HIV treatment access issues, and MDR-TB roll-out. Email: [email protected], website: http://www.citizen-news.org)