Cocoa Farmers will always be poor 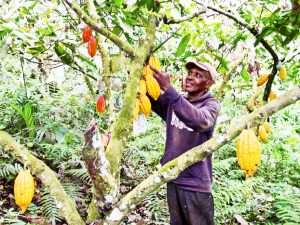 Consumers in the developed world are encouraged to consume 'Fair Trade Chocolate' over conventional chocolate. Besides improving working conditions for farmers and their workers the extra charged premium is supposedly used to pay the cocoa farmers a higher, 'fair price' for their produce.

The profit in the chocolate industry is not generated by the farming of cocoa beans but by trading and the production of raw materials.

German consumers eat per head and year 11kg of chocolate products, in Belgium they enjoy around 8kg, in China 100 gr while in Ghana 500gr.

In a market situation like the chocolate industry, fairness is never in the price of the product. The customer is the king holding money in his hands. Eventually, it is the 'Fair Trade' company that determines the final prices. Therefore, 'fair prices' are never a dream come true rather must be seen as what they are 'Market Prices'.

Ghana is the producer of the best cocoa beans in the world farmed by 800.000 locals. After Ivory Coast the second-largest exporter of cocoa in the world. Like most people, Ghanaians love chocolate but do not produce enough by themselves depending on the re-import of the finished product from former colonial Europe. Companies like Nestle, Cadbury, Lindt&Spruenglie etc. are based on their first steps to greatness by selling chocolate products made of cocoa beans from their then colonies. 1937-38 Carbury Ltd in the UK tried to dictate the price of cocoa forming a cartel with others. It took the intervention of the British Government to end the boycott of African countries and start the shipping of cocoa beans to Europe again.

The highest profit margin in this business is generated not by the cocoa mass but by the cocoa butter. The cosmetic industry is using it and pays very good prices. Butter is the basis of good taste and texture/flavours. Highly rated renowned Master Chocolatiers like Leonidas in Belgium use the highest quality of chocolate which has a high percentage of cocoa butter content. Butter can by its very nature get spoiled very fast for which reason such Pralines must be consumed in around 4 weeks. The trading and profit-making of cocoa butter are entirely in the hands of foreign companies.

Companies like Cargill produce semi-finished chocolate products head in the right direction. The final and most profitable touch to the chocolate reaching in big blocks the shores of the developed world is still undertaken by workers taking home around € 1600 monthly and more compared to their colleagues in Ghana of around € 200. Ritter Sport, Halloren Kugeln, Milka chocolate bars -among others from Germany- in Shoprite Supermarket Chain, in Ghana and other countries across Africa are produced at high labour costs in Germany or Europe including double taxes (raw beans coming to Europe, chocolate bars back to Africa) and expensive transportation costs.

Multinational companies sell their chocolate products claiming they are of the highest quality, made in Europe. Cocoa beans are food items. Food has the highest quality when fresh. A Mango fresh from the tree in Ghana can never be compared to a Mango in any Bio-Supermarket in Europe. The 3-4 months transportation of the new cocoa beans in 64 kg sacks from Brong-Ahafo/Ghana to Hamburg, Germany and our chocolate manufacturers will see many beans spoilt and dead. They are sorted out but the ones used for production have already been infected by the dead bodies. Only the finished product at the source of harvesting in combination with the best processing and production ideas can give consumers around the world the highest quality they deserve and the consumers in the countries of origin chocolate products they can afford and equally enjoy.

Foreign Governments, Multinational companies, workers and trade unions in the developed world will never allow a much-needed shift in economic powers and profits making happen rather take to sweet little lies like "Fair Trade Chocolate'. Too many well-paid jobs along the value chain would get lost for the still dominating companies, workers and countries alike (Taxes and Unemployment rate!).

As long as African countries are financially weak, depending on handouts and loans from the developed world and ruled over by their corrupt politicians the farmers will have to pay the price, suffer and stay in poverty.