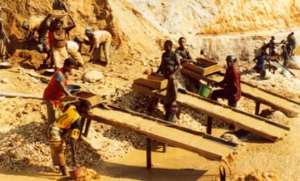 The Upper Denkyira West District is one of the 22 Metropolitan, Municipal and District Assemblies (MMDAs) in the Central Region.

It shares common boundaries with Babiani Ahwiaso Bekwai Municipal to the north, Amansie West and Amansie Central Districts to the east, Wassa Amenfi East and West Municipalities to the West, and Upper Denkyira East Municipality to the south.

It was carved out of the erstwhile Upper Denkyira District with Diaso as its administrative capital. The minerals rich district has a total land area of 579.21 square kilometers representing three percent of the total land area of the Region.

It has a population of 60,054 according to the 2010 population and housing census.

Subsistence agriculture and cash crop farming is the predominant occupation of the people. It is seasonal and largely dependent on rainfall and clean water from rivers and streams namely - Offin Subin, and wells among others.

This makes the rivers very delicate and important for economic, political and social permutations.

However, regular and clean supply of water from these major water sources has become difficult due to illegal mining in and along the courses and tributaries of the rivers.

It is acknowledged that while illegal mining supports the livelihoods of many, it has equally caused severe damages to the environment in many parts of the district. The menace is blamed for the destruction of farmlands, pollution of water bodies and denied the state an estimated $2.3 billion according to the (2016 budget).

Some scholars have argued that the cumbersome legal regime and licensing procedures are to blame for the proliferation of illegal mining. Others have cited corruption, poverty, unemployment, institutional weakness, and the lack of political will to combat it.

These views have gained currency in recent years along with the increasing involvement of foreign nationals in the sector. Understanding these preconditions are important to alignminng Government's policy interventions in accordance with the aspirations and hopes of the people.

Mr Isaac Arkoh, a Journalist engaged some affected farmers in the district in separate interviews on the impact of illegal mining on agriculture in the area. The farmers were in devastated miming communities including subin, Akwaboso, Ameyaw and Nkoranza.

After trekking for almost an hour in a sunny Saturday morning, the reporter came across Madam Elizabeth Asamoah Boateng, a farmer. The 48-year-old vegetables farmer had began clearing weeds in her two-acre tomatoes farm which was battling weeds and pests at the bank of river offin at subin community.

Drenched in sweat with hoe dangling on her neck and pointing to the polluted river offin, the proud farmer said the menace of illegal mining had being a major blow to farming. She said the offin river use to be their main source of drinking water and irrigation.

According to him, farmlands and rangelands on which they had long subsisted had been demarcated to multinational mining companies. The mining sector had not only led to the degradation of agricultural lands, but decreased in land for agricultural production, resulting in shortening of the traditional fallow period.

Mr Andoh, a retired miner also said, in principle, the mining and agriculture sectors are both pathways out of unemployment and poverty. But a disequilibrium can result in a collateral damage for any economy; a situation where one sector grows abnormally or is mismanaged, it dwarfs or diminishes the progress the other.

The wanton destruction of cocoa farms by illegal miners is having a dire impact on Ghana’s cocoa led-economy if not mitigated with urgency, says Mr Kofi Ackom, a rice and cocoa farmer. He showed the massive devastation of an acre swampy land where he had rented from the land owner for years to grow rice annually.

“You can see the way illegal miners have devastated not just the land but the cocoa and rice farmlands which used to be here. This is a very sad state of affairs that amounted to the destruction of the backbone of the economy,” he lamented.

According to him, the menace threatened to undo the investments made by the government to modernize cocoa and rice farming.

Mr Kofi Abotsi, is a 25-year-old young farmer had also sold his two-acre cocoa farm at Diaso and relocated to Nduadua near Breku in the Assin North District. He was sad in his remaks saying every evening before the sunset, young miners trek in single file, carrying pick axes, head pans, hammers and shovels to their sites to mine.

They walk towards the southern bank of the river where they make a living from cutting trees, digging into the ground, overturning rocks and pushing the rubble into the river. The practice, further clogged the near stagnant water body with mud.

Sadly, Me Abotsi revealed that the illegal miners cut and burn wood to fuel their makeshift camps. They use mercury and cyanide to separate gold from the rocks, and then flush the toxins into the soil and rivers.

A once promising agricultural area known predominantly for its cultivation of cocoa and plantain, as well as filled with well-tended farmsteads of maize, cocoyam and cassava is on the brink of collapse.

It was also observed that many farmlands bordering the Upper Denkyira West District where the mineral is found in large quantities have been turned to a ghostly scene of wasted fields. The trees are ripped up by their roots and left to rot, gaping holes in the soil, plantations cut and burned.

In a visibly disturbed appearance, Mr Abotsi regretted selling his three-acre cocoa farm to illegal miners and cried out that "the boom is fiercely driving away young farmers.

“Community farm lands are gradually reducing with a shift of mind to galamsey. Today, one can count very few palm, plantain and cocoa plantations and a low record of vegetable cultivation here."

Pointing a degraded and abandoned galamssey site, he stated "this place was a very rich soil type that is good and was previously the main site for the cultivation of vegetables and oil palm. But these crops had to be cleared for the operation of galamsey.”

However, another outcry observed in the area was how illegal mining had created population imbalances between the old and young.

Farming had been left at the mercy of the older population between 45 and 80 years with a few between the ages of 30 and 45.

Mr Yaw Adoba, a-25-year-old farmer who corroborated the observation, explained that some of the aged farmers, because they were unable to do most of the farming activities, had their farms managed by caretakers who usually are not as productive as they would have been. This has led to low yield and poor income forcing them to sell the lands to the illegal miners.

Checks at the markets in the communities indicated that, food crops traders in the area who buy and sell plantain, cassava, maize, cocoyam and vegetables had to travel to the nearby districts for food crop to sell in the local market.

The reason being that quantities of good stuff supplied to the local markets by the farmers had reduced because of the mining activities among other factors.

They experienced shortage of food stuffs in the market at certain times of the year especially from March-July that is the beginning of the farming season. This is because the mining has affected farmer’s lands and also many young farmers were no longer interested in farming.

It was observed that prices of food crops in the markets had gone high as a “finger” of plantain which was selling at GH¢1.00 is now GH¢ 2.00, due to low production of such crops as a results of reduction of land size, and farmers no longer produce high quantity of food as they use to produce.

The mode of operation of the illegal gold miners based on how they acquired land for their operations and the process they go through to extract the gold. The miners contact the land owners and pay amount of money to them for the land to be released for the mining activities.

Some of them work on rental bases of which they pay money every two weeks and others pay part of the money and after completion pay the rest.

Rice, one of the staple food is no longer cultivated by many because most of the farmers leased out the lands that was used for rice production for the mining activities.

They affirmed that the land size for food production has reduced due to constant demand on farmlands for mining activities in the area. Water bodies which serves as drinking water and also for irrigating crops has been polluted thereby households have to carry water to their farms.

There is competition between farm labour and labour for mining. Uncovered pits breeds mosquitoes which could bring about malaria cases. Farm land has been degraded.

It was obvious that mining has affected food availability in the households since they do not have food all year round as they used to have previously before the mining.

The Special Advisor to the Minister of Lands and Natural Resources, Mr Benjamin Aryee, has underscored the need for the government to take a holistic look at the approach it adopted in the fight against illegal mining if the desired impact is to be made. That is exactly the best antidote to remedy the situation.

Better results would have been achieved if the government had incorporated the Ghana National Association of Small-scale Miners (GNASSM) in the strategy to tackle the menace, instead of the wholesale ban on all forms of small-scale mining.

Considering what the government has done so far in fighting galamsey and the results that are showing, I am of the view that we left out the licensed small-scale miners too much in the approach that was adopted,” he said.

According to him, the government had a point in taking drastic measures to fight the menace because it was difficult to identify legitimate and illegitimate small-scale miners under the crisis situation.

Yet, if it looked at what existed a bit more, we could have found out that there were legitimate operators who were even fighting illegalities in the small-scale mining sector in their own small way.

GRA dissociates itself from comments made by Commissioner of...
10 minutes ago