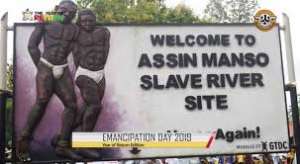 The United Nations Educational, Scientific and Cultural Organization ( UNESCO), has documented about 32 forts and castles along Ghana’s coast as World Heritage Sites. These edifices testify to the once flourishing trade between the indigenous Ghanaians and the European trading companies of England, Portugal, Netherlands, Denmark, France, Sweden, and Germany among others.

Yet, until recently, the attention of many Ghanaians was largely focused on the European trading fortresses dotted along the coastline of Ghana. However, there are several historic monuments and untold stories that had been overlooked for years, hence , the urgent need to throw more light on some these colonial relics particularly in the Assin area for bettrer national recognition to enhance tourism growth and development.

The Assin people are an ethnic group of the Akans who live in the northwestern and central part of the Central Region.

Narrating the colonial role of the Assin-Praso community during the trans-Atlantic chattel trade, Nana Baffour Adjei X, Chief of Assin Jakai/Assin Praso said the community marked the end of the British protectorate in the Gold Coast during the colonial era. He said the location of Assin-Praso and the strategic transit role it played in the transportation of slaves from the northern part of the country through the Ashanti Region to Cape Coast and Elmina Castles could not be underestimated.

The Assin-Praso Heritage Village has been established as an information centre with catering facilities and a mausoleum displayed with slave chains and artifacts associated with the Trans-Atlantic Slave trade in the early 19th Century.

The Village also hosts the remains of the British castle where soldiers and their armoury were stationed. The British encamped in the community to fight against the Ashanti Kingdom in the Anglo Ashanti war. The Ashanti Kingdom was powerful and bravely fought and resisted colonial rule.The two were separated by the Pra River.

On the banks of river Praso, many battles were fought. It was the bank of the river Pra which runs on this site that the great King Osei Tutu I, King of Ashanti Kingdom, was shot whilst crossing the river in one of his many military escapades.

British Camp commandments, their families, British soldiers and captured slaves who died in Assin Praso during the Anglo-Ashanti battles are buried in the Heritage Village cemetery. Major Victor Ferguson (2nd Life Guards), who died in 1896 whilst serving as camp commandments and his wife Sophia are among those buried on the site. You will also find mass graves of both British and Africa Soldiers and enslaved Africans.

Assin-Praso has relics of their armoury, castles, mass graveyard for blacks and white cemetery, historic bamboo plantation and the resting place of the famous Yaa Asantewa before she was sent to the Elmina Castle.

It was also the resting and a meeting place where the whites met before transiting to or from the northern or southern part of Ghana. People from Mali, Sierra Leone, Burkina, Nigeria were brought here for war during the anglo-Ashanti wars.

Located about five minutes drive in an obscure corner near the Assin-Praso tollbooth in the Assin North District of the Central Region is the infamous "historic mango tree of life and death." It doubles as the oldest and the longest mango tree in Ghana and West Africa.

The Tree is outstanding in the semi-deciduous forest, interspersed with thick canopy of bamboo and climbing palm. It has a thick trunk and about 100 feet into the skies with a wide canopy extending to about 35 feet due to the richness of the soil.

The leaves are leathery, lanceolate and found in simple-alternate arrangement on the branches as the soil appeared dark brown in colour and much sandier. Beneath the giant mango tree is a dense emergent of many trees species of palms, cocoa and bamboo.

Giving a horrific oral tradition about the role of the community during the trans-Atlantic Chattel trade, Nana Owodo Aseku X, Chief Assin-Jakai/Assin-Praso described the historic mango tree as a "gateway".

From the Tree, one may travel to places undreamed of. It may appear different, yet it is the same Tree with its roots connected to all the realms of life.

Each realm has its "own" tree, in the darker realms it is the Tree of Death while in the realms of light, the Tree of Life. The Tree is one but manifests itself in different forms, reflecting the inherent duality of being. It is not where journeys end, but where they begin.

The gate to the Well of Souls is embedded in its trunk, the path by which spirits of the dead find their way to the Kingdom of the Dead and to other realms when they are reborn. It can be used to travels to another realm.

Why Tree of Life and Death

The Tree is so called because of the key role it played during the trans-Atlantic Chattel slave trade. It was the Tree where slaves were tied until they were transported to Assin-Manso to be sold or to Cape Coast Castle and Elimina Castle for shipments.

Captured Africans were forced to trek barefooted, through the harsh bush and over rough terrain for sometimes hundreds of miles headed to the Gold Coast Dungeon. They suffered abuses, were starved and beaten into compliance by the hired drivers of the slave merchants.

Fortunately, many others who were starved for days had to depend on the bountiful mango fruits for survival, hence, its name. Interestingly, the giant tree can be found at the same place which became a battleground.

Whipping of a Fugitive Slave

Fugitives were forced to lying on stomach, with the victim's hands and legs are tied to stakes while being whipped by the black overseer; next to one of his legs is the iron spiked collar, with attached chain, which was often attached to the neck of captured fugitive slaves.

Other slaves and the planter and his family witness the scene. Today, you have the freedom to walk the path the enslaved Africans walked, bath the river in which they bathed to learn at first-hand what happened on the land of Assin Praso.

Relatedly, Assin-Manso is another historical town in the Assin South District of the Central Region. It is located 40 kilometers away from Cape Coast. It was one of the largest slave markets for gathering people to sell into slavery during the infamous trans-Atlantic slave trade.

Near the journey's end in Ghana, the captives were given a last, ritual bath in a river before being sold. Today, the Assin Manso site is a sacred place of remembrance. In this area of mangrove swamps, an image of slaves chained by the feet promises, "Never again."

He explained the tourism embodiment of the community saying it was the final link in the slavery route from northern Ghana. It was known to have been the largest slave market for the merchant supplying slaves on the forts and castles on the coast.

Narrating the history of the town, he said Assin-Manso served as the place where slaves had their last bath on their journey from the northern part of Gold Coast to the Elmina and Cape Coast Castles.

It also has the site where the returned remains of two diasporans (Lady Crystal from Jamaica and Carson from New York) were re-buried.

Asain-Manso also host the Memorial Wall of Return - where most Africans write their names on the wall indicating they have found their root. There was an epitaph which pays tribute to some prominent people who were involved in slavery.

Captured Africans were forced to trek barefoot, through the harsh bush and over rough terrain for sometimes hundreds of miles headed to the Gold Coast Dungeon. They suffered abuse, were starved and beaten into compliance by the hired drivers of the slave merchant. They were often attacked by wild animals, but unable to fight or run because they remained shackled and chained.

After they bathed in the river, the captives were then taken on the final leg of their journey in Ghana, to the last place they'd ever see in their homeland: slave forts on the Atlantic like the Cape Coast and Elmina castles.

On the way to the coastal dungeon, the slave merchants stopped at the DONKOR NSUO, ”the slave river”, in Assin-Manso. Captured Africans were allowed to recuperate there after their long journey. Here, they were well fed and rested for several days or weeks.

The merchants knew they could guarantee higher prices if they appeared healthy and strong. DONKO NSUO is where the captives would take their last bath in waters of their native land. The Portuguese began the inhumane practice of branding.

They would use a red, hot branding iron to burn an identifying mark onto the skin of captives. The burns mark would leave a scar on the shoulder, the breast or the upper arm to show ownership.

Other times branding was used to show that proper duty had been paid. When it was time to leave, they were sorted, leaving the weak ones behind chained trees, where the unthinkable happened. The stronger captives continued walking for approximately 40 miles to Cape Coast Castle, still shacked and chained.

The traditional authorities have called on the government to develop the historical sites into a world-class tourist destination. They stated that the sites had been poorly packaged even though it had vast natural resources and historical monuments that could contribute to tourism development in the country.

They suggested a closer collaboration between the Ministry of Tourism, assemblies, traditional authorities and the private sector as the way to boost visitation, generate more revenue and create employment opportunities for the youth in the area. It would also deepen Ghana's recognition as the gateway and homeland for Africans in the diaspora and create an employment avenue for the indigenes.

Responding to the Chief's plea, Mr Mark Okraku Mantey, the Deputy Minister for Tourism said the government was committed to promoting local tourism and assured that the concerns would be addressed. He advised the community to devise profitable activities that would attract tourists to the community.