Back to school after delivery:  The poverty  dilemma in Assin South and Ajumako 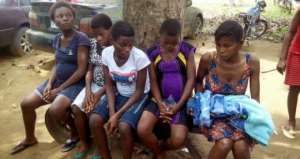 Teenage pregnancy and motherhood is a global problem. The educational difficulties of adolescents who experience pregnancy are enormous. Pregnant adolescents are a population at risk for dropout and have been found to complete fewer years of education than peers.

Pregnant girls’ social experience in school may be a factor in their likelihood to persist, as social integration is thought to buffer dropout risk.

Each year, more than sixteen million teenage girls around the world give birth. The majority of teenage mothers are found in low and middle-income countries (WHO, 2016).

In August 2020, the I graced a sensitisation program for some selected adolescent sexual and gender-based violence, domestic violence and reproductive health issues. It was held at Ajumako-Bisease in the Ajumako-Enyan-Essiam District of the Central Region.

It was put together by the Central Regional Department of Gender in collaboration with the Regional Coordinating Council and supported by the United Nations Population Fund (UNFPA).

At the event, the adolescent girls in particular largely confessed that the inability of parents and guidance to buy sanitary pads and properly feed young girls were key factors pushing young girls to engage in unprotected sex in the District.

Therefore, such space had been occupied by some unscrupulous men who use girls as sexual objects under the guise of buying them pad and providing money for food and other personal belongings as their parents looked on helplessly.

According to the girls, high rate of unemployment among their parents had resulted in abject poverty, forcing their parents to shirk their obligations, leaving them at the sexual pleasures of unscrupulous men who lured them into unprotected sex leading to teenage pregnancies.

They explained that the situation had created a vicious cycle where young poor semi-educated girls have become premature poor mothers at the expense of their education and development.

“I have a friend whose parents have almost given her in marriage to a taxi driver who takes care of her. Others engage in disguised prostitution as income generating ventures to feed their families,” says Lydia Ankrah (not her real name), a-15-year-old girl.

She added that many girls face considerable pressure to marry early in their communities to prove their fertility and also to ease the responsibility of their parents in their upkeep.

Ernestina Aidoo (not her real name), a-14-year old girl said her 52-year-old poor single mother could not afford to buy sanitary pad for her, so she had to used strips of cloth instead, anytime she was menstruating, a situation she said was sometimes unhygienic.

“I can’t blame my mother for giving me strips of cloth as pad because that is the best she can afford. Eventually, when the situation become unbearable, my mother forced me into unprotected sex with an a-32-year-old farmer who occasionally gives me between 5 and 10 cedis.”

Florence Mensah (given name), a-16-year-old, giving account of her personal experiences said her parents’ inability to care for her forced her to bow to incessant pressure from one of her school mates who later broke her virginity.

“I know friends who are in relationship with men as old as their father,” she added.

Narrating he ordeal in an interview, three years ago, when she was 13, Araba Koomson (not her real name) started selling things by the roadside to help her mum out at home. There she met a 26-year-old mechanic who offered to support her with school supplies, money sanitary pad. Something her mum could not provide. Unfortunately, she ended up becoming pregnant for the man.

People called her names for truncating her education at Achiase in the Assin South District. They said she was lazy, not interested in school but she was directly opposite that - hardworking and industrious. She was just looking for a way to support my family.

What happened to me was all about financial problems. I needed money. My school didn’t charge fees, but there were compulsory books we were asked you to buy.

I didn’t know I was pregnant until my mum took me to the hospital. Eventually, I showed the man who got me pregnant, and he was helping me financially until my mum made a police case him. Afraid of the consequences of his action, he left my community. Now he doesn’t come home. When we call him, he doesn’t pick up the calls. And so we’ve forgotten about him.

I’m not a shy type; I don’t care what people say. I started back at school barely three months after giving birth. I even sometimes bring my friends to the house when I’m coming to breastfeed the baby during break. But it has really changed my plans. By now, I would have been at Senior High School (SHS) otherwise.

I’m very happy to be back at school; I think I’m the only one in this village who has given birth and gone back to school. I’m thinking of becoming a doctor. But what I want now after SHS is to work even harder, so my son can go to a world class school, and he can learn, and be even better than me in the future.

I would like to say – girls shouldn’t follow a man, especially girls underage. They will tell you all sorts of sugar-coated words, but after having an affair with you, they just see you as trash or something.

We should focus only on our education. When the situation comes, you can’t reverse it again. Giving birth isn’t easy. Sometimes, I see the other girls in the village who are following men, and I call them to advise them. Because I know the consequences.

Education is the key to success. If you are not educated, it is very hard for you to prosper. Other girls who have had babies need to come back to school, and just ignore anyone who says something, and put their focus on their education. Parents should support them, and teachers shouldn’t ignore them.

My mum takes care of the baby, and she sent me back to school because she knows I can make it in the future. We still don’t have money, but my mum and I both sell. And my son, he’s very funny. He’s a gift.

Araba together with other young girls stressed the need for girls' to be empowered for them to be assertive and take bold decisions about their bodies, future and have access to appropriate healthcare services.

They urged parents and guardians to find some work doing to enable them invest in the education of their children and to train them well to help check delinquency and bad adolescents behavior.

According to the young girls, efforts to curb teenage pregnancies and end child marriages will help in retention of girls in school, adding that the authorities should also focus on empowering girls who cannot continue schooling economically, to learn trades of their choice.

They should also enforce laws on child marriage and effectively design tailored advocacy programs to educate key stakeholders and adolescent girls on the consequences of teenage pregnancy.

Additionally, there was the need to address socio-cultural norms, practices to help end child marriage.

Ms. Esther Amankwa, acting District Director of Health for Ajumako who corroborated the stories of the girls, decried the worrying trend of teen pregnancies in the District.

She mentioned other factors to include parental irresponsibility, poverty, unemployment, lack of understanding of adolescent reproductive health issues and assertiveness, illiteracy and low self-esteem among adolescent young girls.

Others are decreasing age of puberty, early age of sexual debut, early marriage, low use of contraceptives and lack of knowledge about sex and family planning.

To reverse the trend, she called for a collective efforts to preventing adolescent pregnancy, intensified sex education and strongly encourage abstinence or contraceptive use.

At a similar programme at Achiase in the Assin South, the views were not different. The District recorded the highest number of adolescent pregnancies in the first quarter of 2020 in the Central Region.

Mr Bandele Haruna Junior, a Health Promotion Officer at the District Health Directorate said of a total of 1,352 pregnancies recorded in the district for the first half, 250 were adolescent girls between the age bracket of 10-19 years representing 18.5 percent.

The district's performance was above the regional target of 11.5 percent, says Mr Bandele Haruna Junior, a Health Promotion Officer at the District Health Directorate.

Among others, Mr Haruna mentioned the heightened activities of some young unemployed boys he referred to as "fraud or "sakawa" boys", who as a result of poverty lured young girls into unprotected sex and abandon them thereafter.

Additionally, poor and irresponsible parenting, access to mobile phones and pornographic materials, lack of mentors, assertiveness, and pressure on girls to birth early as a sign of fertility are all contributing factors.

Using herself as a mentor to the young girls, Mrs. Thywill Eyra Kpe, Central Region Director of the Department of Gender encouraged the girls to set visions for themselves to guide them to remain focused and determined to succeed.

They should have positive mentors who will inspire and support them to enhance their chances for success.

Mr Randford Appiah, Assin South Director of Education called on parents not to abandon their adolescent girls who got pregnant, but support and empower them to better themselves.

He said parents often neglected the social, psychological, and physiological needs of their children, which often led them astray as they sought support from the wrong people.

They should not shirk their responsibilities to unscrupulous men who impregnate young girls by relegating teenage mothers to their fate.

"Sometimes when you see some children in school, you ask yourself if you are coming from home. Their uniforms are tattered and appeared unkept - affecting their self-confidence," he said.

Terrified by the experiences of the young girls, Mrs Kpe, with support from UNFPA, distributed quantities of sanitary pads to girls as a temporarily remedy to the situation.

She encouraged the youth to be determined to succeed in life and avoid all tendencies that derailed them.

Mr Alan Paintsil, a Director at the Central Regional Coordinating Council, urged the participants to avoid bad friends who will lead them astray and take their lessons seriously.

First, the pregnancy itself brings radical changes to the girls lives and rarely for the better. In most cases, the girls education is interrupted or may completely end as most either drop out from school or are expelled.

Furthermore, teenage girls lack qualifications for securing employment and therefore become trapped in poverty for the rest of their lives.

Thirdly, available evidence shows that children born to teenage mothers are most likely to be premature, have birth injuries or may even die during infancy (WHO, 2016).