Fighting the fall armyworms: Detergent and herbal concoctions to the rescue 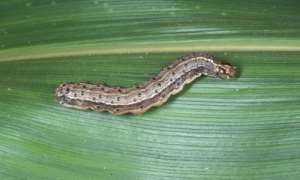 Large hectares of vegetable and maize farms in parts of Assin, have been ruined by armyworms, something that is threatening food security and has left many farmers impoverished.

The widespread destruction of food crop farms by the worms remains a serious threat to Ghana’s food security, in spite of the assurance by officials of the Food and Agriculture Ministry (MoFA) that the pest attack is under control.

There are recent media reports about the resurgence of the fall armyworms in parts of the country.

In the Central Region, a total of about 19 districts with a combined farmer population of over four million farmers, are reported to have come under the pest attack.

The worms lay their eggs on leaves and tiny caterpillars emerge from the eggs within three days to launch massive onslaught on food crops, flowers and stalk – impeding their growth.

They feed on variety of crops – maize, cotton, soya-beans, potatoes and cash crops like cocoa.

Notwithstanding the distribution of large quantities of chemicals to farmers across the country, to tackle the fall armyworm, more than 1,350 hectares of maize farms came under invasion, last year.

Mr Gershon Wodzrah, the Central Regional Director, says over 14,000 farms were ravaged in 2018.

Some frustrated farmers in the Assin South, Central and North Districts have resorted to unconventional and crude methods to fight the ruinous worms.

Kofi Akwanu, a 26-year-old father of two, who has cultivated a three-acre maize farm, about five kilometres away from the Assin Fosu, told the Ghana News Agency (GNA) that they had found their own way of battling the pest.

He pours a bucket full of water into a yellowish watering can, containing a mixture of Omo – a washing powder, powdered pepper and salt, forming a reddish solution and there he goes – ready to wipe out the crop damaging fall armyworms.

He sprays the leaves of the meter-tall maize plants with the solution, claiming, it had proven to be effective in neutralizing the destructive insects.

Many farmers in the area are increasingly resorting to spraying their maize farms using the crudely prepared solution.

The worms can grow up to 50 millimetres (two inches), nestle in the leaves around the head of the maize and then begin their attack, leaving behind shredded leaves and chewed or hollowed ears of corn.

Two days after Mr Akwanu had sprayed his farm with the Omo, pepper and salt solution, he took this reporter to his farm to confirm the results and it was amazing. The innocuous brown and beige crop devouring caterpillars were found dead.

Visits to a number of farming communities including Abodweseso, Kwafokrom, Yaw Boamah and Adadientem in the Assin South District showed massive invasion of farms by the armyworm.

“I lost nearly a quarter of my income last year due to the armyworm outbreak” said Williams Kwame Odame, a farmer in Homaho.

The 55-year old local chief farmer said “the attack was very fast and furious. In a short while, huge swathes of (crops) had been eaten. I lost 50 percent of my crop, others up to 70 percent.”

Mr. Jacob De-Graft Sackey, the District Director of Agriculture, confirmed the practice and said that they could not immediately tell the socio-economic and health consequences of the unconventional method the farmers were using to tackle the armyworm.

He conceded that their “elimination will be quiet difficult.

“They have come to stay and the earlier farmers accepted the advice on the worms control mechanisms from extension agents, the better for us all.

“We cannot immediately do away with them, it not only difficult but almost impossible to get them out due to bad agronomic practices by farmers”.

He said they had stepped up public education.

In the communities visited, some farmers spoke about organic control methods, they had found more effective for overcoming the armyworms than the use of the “Omo-pepper-salt” solution and the MoFA’s recommended chemical.

They are using a bio-pesticide called “Nimbecidine”. This bio-pesticide produced from the neem-tree is not only able to control the fall armyworm, but also aphids, leaf miners, mites, whiteflies, thrips and wireworms. It prevents the pests from feeding on food crops and interferes with their ability to lay eggs.

There is yet another method that involves the use of “pyrethrum”. The white flowers in pyrethrum are picked on a warm day when they are open, dried and stored in an airtight container in the dark.

She expressed strong conviction that the pests could be controlled with garlic, given to its antifeedant properties.

At Assin Ninkyiso, a predominantly farming community about ten kilometres away from Bereku, the district capital of the Assin North, Nana Badu Apewosika, described the fall armyworm attack as heart-breaking.

Desperate farmers in the area have been using Noni oil and “Acheampong” (herb) a common weed, to spray their fields.

The fall armyworms are wreaking havoc on farms – laying waste investments made by farmers.

The worms are increasingly becoming a huge disincentive to farming and need to be tackled.

They have not been destroying only cereal crops but tree crops – something the farmers find shocking and unbelievable.

He told the GNA that his office had been providing advisory services to the farmers.

Efforts were made to stop the spread of the insects by alternating maize with other crops between seasons, but the caterpillar simply switched to bananas, millet and sorghum before returning to maize during the next harvest.

What this means is that the armyworm quickly develops resistance to prolonged use of the same pesticide.

“Some farmers are using detergents, and they have actually told us it works, farmers have also used other methods like ash (sprinkled on the cobs) — it worked for some — and some of them are putting soil in the (hole on top) of the crop to suffocate the pest.”

He added the use of pesticides in general “is resisted by farmers”. They avoid using them, particularly, on their maize farms.

“The invasion has taken everyone here by surprise. At first, the worms were not even recognised. They were mistaken for the local, less voracious and easier-to-combat “African armyworm” – another brownish, caterpillar the size of a child’s pinky.”

Mr. John Odai-Tettey, Regional Director of the Food and Drugs Authority (FDA), said the use of poisonous chemicals on food especially vegetables could have dire health implications and asked that farmers stopped the use of any untested and uncertified liquid mixture.

These mixtures might bring short term good results but the medium to long term implications could be disastrous not just for the agriculture sector but also for humans.

No comprehensive scientific research to know the residue levels of the liquid mixtures and health implications has been done.

He called for MoFA to resource its district managers to carry out sustained public education to discourage the use of unapproved solutions.

Mr Kwabena Blewu, the Assin South District Director of NADMO, however, underlined the determination of the disaster management organization to work together with MoFA and the Regional Coordinating Council to combat the fall armyworm, threatening the livelihood of farmers.

He urged farmers to report any attack on their farms early to the agriculture extension officers and NADMO and to spray their farms regularly, in accordance with expert advice, to ward off the fall armyworm.