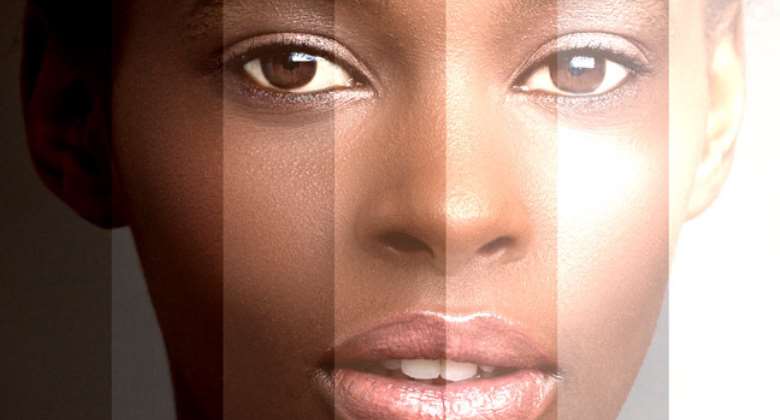 Flawless and crystal smooth-skin is a relish of everyone. The human skin protects against micro-organisms - bacteria that cause diseases. A healthy skin produces Vitamins D for strong bones.

Knowing these significance of the human skin, why do people spend time and resources to bleach their beautiful skin rendering it incapable of protecting itself? Unfortunately, some people use all manner of chemicals, creams, pills and injectables in the name of caring for the skin and making it beautiful.

Notwithstanding, blacks across the world are stigmatised for having dark skin. The phenomenon is manifested internationally as "colourism".

Up until the present, the stigmatisation of people with dark skin continue unabated. Many blacks and dark skinned people appear to have lost hope, pride and dignity in their unique "dark skin". They have developed high sense of inferiority complex and misconceptions of beauty associated with the colour "White" or "light skin".

Meanwhile, light-skinned blacks are celebrated in line with western beauty and intelligence whiteness has been elevated and presented as a universal standard of beauty and progress.

It is ironical to see a charming black beauty turn into a blonde-haired female with skin several shades lighter than it was a few years back. Interestingly, society is not witnessing only women but also men who have taken to this practice, as we are bombarded with lightening celebrities and a variety of creams on the shelves.

The unhealthy practice has become fashionable to some people that the more light-skinned you are, the better human being you have become.

The World Health Organization (WHO) defines bleaching as the intentional alteration of one's natural skin colour to one relatively if not substantially, lighter in color, through the use of chemical skin lighting agents, either manufactured, homemade, or the combination of the two.

Statistics compiled by the WHO in 2011 showed that 40 per cent of African women bleach their skin. In some countries the figure is higher: a staggering 77 per cent of women in Nigeria, 59 per cent in Togo, 35 per cent in South Africa, 27 per cent in Senegal and 25 per cent in Mali use skin-lightening products.

It said most contemporary skin-bleaching creams contain ingredients that inhibit the production of melanin, a body chemical that darkens skin. One such ingredient is hydroquinone, a depigmenting agent that lightens skin.

The WHO has warned that hydroquinone’s side effects include dermatitis (skin irritation), blue-black discolouration and even blindness. It can cause liver and kidney damage, psychosis, brain damage in fetuses and cancer.

Skin bleaching is perceived to give a good status in one's group, family and society. Some men are also believed to prefer light skin ladies to those dark in complexion the reason some women bleach.

But what will it profit a woman to bleach her skin for a man? If the act comes with a lot of side effects that can even destroy the reason you indulge in it.

Ms Catherine Odoom Hagan, a 30-year-old Cosmetician at the Kotokuraba in Cape Coast in an interview with the Ghana News Agency (GNA) said: “Light skin is what men want. Therefore, it makes sense for women to assimilate to the standard that men want in order to increase the chances of getting married."

According to her, marriage serves as a form of social capital—being someone’s wife, a child bearer and esteemed member of society. It will elevate a woman. She added that proponents of depigmentation maintain the illusion that lighter skin will allow them to find better jobs, and to seduce more easily.

Adding to that, Mr Philip Amoah, a 35-year-old Banker said: “This is the reason I believe banning these products will not completely solve the problem."

He said the unhealthy practice is been fueled by major promotional outlets and programmes. That includes the Ghanaian and African movies, beauty pageants, modelling, fashion, magazines and television. Such platforms seem to promote bleaching as a benchmark for beauty. Something the youth of today are copying blindly.

The gentleman who appeared very dark in colour called for an open conversation around skin colour and beauty. The media, particularly the fashion media, must feature other types of beauty beyond the Western ideal, to end this colour bias.

Sadly, some pregnant women swallow pills with the aim of turning the foetuses in the wombs into light-skinned babies at birth. What is wrong with some human beings that they can subject unborn foetuses to such cruelty? One can only imagine what the growing foetuses experience, considering the reactive nature of the chemicals in these pills.

Babies whose mothers take the bleaching pills can develop defects such as absence of limbs and dysfunctional organs according to health experts.

"Injectables are the most dangerous. It’s very dangerous for pregnant women to take bleaching tablets,” warns a Medical Doctor at the University of Cape Coast Hospital who wants to remain unanimous disclosed told the GNA.

Injectables to lighten skin are “the most dangerous available now, partly because you do not know what is inside the injections … and many are buying from informal markets."

The colourism—preference for lighter skin—may affect an individual’s self-esteem, perceptions of beauty and economic opportunities. And the skincare and cosmetics industry is taking advantage of craze for lighter skin.

According to the health expert, some creams contain steroids, compounds that doctors sometimes prescribe to treat skin conditions such as eczema, allergic reactions and dermatitis, which are meant to be used for not more than seven days and only on affected areas. Overuse of steroid creams over a long period can cause thinning or weakening of the skin, stretch marks and easy bruising.

Because steroids reduce the number of melanocytes, or cells that produce melanin, manufacturers of skin-bleaching creams recklessly mix steroids into their products. The continual use of these creams eventually leads to a dependence or addiction because when they are discontinued, the skin returns to its original color.

Ellen Amankwah, 23-year-old hawker gave her reasons for bleaching. “I’ve been dark skinned for many years and I wanted to experience the other side. I wanted to see what it would be like to be white and I’m happy".

In the music and entertainment industry, the greatest victim of skin bleaching was the late Pop star, Michael Jackson who met his premature and untimely death.

Reports indicated that the Pop star had the upper layer of his skin peeled off, destroying his skin ability to produce melanin that protects the skin against ultra-violent rays and exposes the skin to blood cancer such as leukemia and cancer of the liver and kidney.

Currently, Ama K. Abebrese, an actress has added her voice to the anti-bleaching campaign. Together with Nana Ama Mcbrown, Paulina Oduro, and Hamamat have called on women to love their natural skin tone and say no to skin bleaching and skin toning.

This campaign is not to point accusing fingers at those who are bleaching, rather to let people understand that we all come in different skin tones and we must love and embrace whatever we are blessed with.

Beauty is not defined by only outer looks but the entirety of one's personality and therefore light skin cannot set the benchmark for beauty.

In that light, the Food and Drugs Authority (FDA) in January 2019 warned the public against using some 41 cosmetic products which it says contain harmful substances including mercury, hydroquinone and steroids. The FDA directed the producers of the harmful products to recall them from the market with immediate effect.

The directive was issued after the Authority's investigations on the Ghanaian market revealed that some cosmetic products contain some harmful substances which violate the Standards Authority Act, 1973 (N.R.C.D.1 173) as well as sections 111 (c) and 113 (b) of the Public Health Act, 2012, Act 851.

"The companies whose products contain these substances (mercury, hydroquinone and steroids) were directed to initiate an immediate recall of their products from the market as they pose a potential health risk," the FDA said in a statement signed by its Head Communications and Public Education Department, James Lartey.

Following the remarkable success of the global blockbuster movie Black Panther, which featured a predominantly black cast, a growing number of people with dark skin are taking pride in their complexions, coining hashtags such as #melaninpoppin and #blackgirlmagic to celebrate their dark skin tones.

There is the need for people to realize that their dark-skin are better disposed to deal with the effects of the sun’s rays than when it is light. All must pay heed to the calls for all to put a stop to bleaching and be grateful for their God-given skin colours, but all that seem to have fallen on deaf ears.

Perhaps the ultimate reason for this is ignorance and lack of self-confidence resulting in skin cancer, leukemia, renal failure, exacerbated asthma, skin allergy and irritation.

Like the internationally acclaimed Kenyan actress Lupita Nyong’o, who featured in Black Panther once said: “I cannot run away from who I am and my complexion or the larger society, and how they may view that. Acceptance and contentment in oneself was key to a successful life." Love your natural skin tone and say no to skin bleaching and toning.

Why go to the IMF when SSNIT can give you the money you need...
26 minutes ago

Northern Ghana is underdeveloped because of underinvestment ...
54 minutes ago