Ghanaians Must Sign off JD Mahama’s Political Obituary On December 7, 2020! 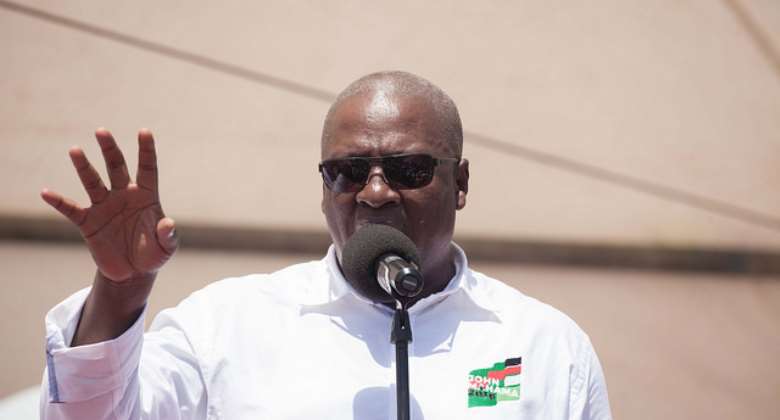 To borrow Shakespeare’s observation about one of the realities of human condition to describe Mr. JD Mahama’s unstatesmanlike behaviors in Ghanaian politics since losing the presidency in 2016, one may be tempted to say ex-President Mahama walks across the country and “bestride the narrow world [Ghana] like a Colossus, and we petty [people]…find ourselves dishonorable graves. [Some people] at some time are masters of their fates.”

This is one of the major reasons on December 7, 2020, all reasonable-minded Ghanaians must ensure that Mr. JD Mahama and his slick politics of division, tribalism, violence, lies, confusion, incoherent public speeches, propaganda, manipulation, incompetence, and a sense of entitlement to the presidency, are dumped into the garbage can of history. The 2020 presidential election must be a rude awakening moment for power-drunk former President Mahama.

In fact, this upcoming December 7 should be the day Ghanaians of all goodwill must finally sign off JDM’s political obituary certificate with a simple but enduring message that “Mr. JD Mahama, enough is enough, we are fully aware of your capabilities as ex-president, just go ahead and retire into political oblivion for sake of your own NDC party future prospects and more importantly, Ghana’s progress.

Ghanaians must understand Mr. Mahama has no sustainable plans for Ghana except enabling “anything goes culture.” We need to understand as people we create our own individual circumstances, but often many of us blame others for our ambivalences or shortcomings. What else can ex-President Mahama offer Ghanaians apart from when he was president? So, come December 7, 2020 presidential election, the unfortunate “fates” that Shakespeare rightly observes centuries ago will be in full display around many brothers and sisters in Ghana bent on voting—for whatever reason(s)—for lack of vision, backwardness, and clueless leadership exemplified by Mr. JD Mahama when in power and even as a main opposition leader.

The former president-turned-flagbearer of the opposition NDC party fully knows the disturbing extent of his inept management style when he was in the political saddles as vice president and eventually, as president of Ghana prior to 2017. No matter how he tries, Mr. Dramani Mahama has consistently proven that he is simply not a good manager of contemporary statecraft except misapplication of state’s meager resources, and more so in the science of manipulation and incoherent public outbursts.

Those Ghanaians who have not observed the former president’s public demeanors carefully, may easily fall into misleading belief that Mr. JD Mahama is unassumingly selfless and decisive leader with genuine humane sentiments; but the contrary is the case. Evidently, ex-President Mahama’s number one, if not the only underlying motive why he is in politics is because of the “raw power” Ghana’s Constitution bestowed on the president to leverage his/her authority over the state’s institutions.

If the current NDC leader, traversing the country today and acting as if he gets all his political acts together truly cares about the ordinary Ghanaians, his past presidency and policies should have reflected the socioeconomic conditions in Ghana before majority of Ghanaians booted him out of office in 2016. As then incumbent president with all the levers of state power at his disposal, the fact that he was mercilessly defeated and kicked out from the nation’s presidency speaks eloquently to his full-blown incompetent leadership and the dearth of trust Ghanaians have for his leadership.

Fact is if reasonable-minded Ghanaians without any whisper of cynicism genuinely embark on some soul-searching, and try to understand the direction Nana Addo painstakingly taking this country along, there is no way Mr. Mahama should survive the deadly political tsunami coming through his path in December 7, 2020 general elections. It really is unsettling development; and it is quite troubling to witness a “lucky” former president who had all the opportunities in this world to engineer meaningful change in Ghana but could not successfully execute that transformation.

As one of the popular clichés has it: “Hindsight is always 20/20.” Mr. JD Mahama has been in Ghana’s highest decision-making chair before, where he could have implemented a lot of social intervention programs given that the political party (NDC) he commandeers pretentiously lay claim to representing social safety net or social democratic ideals. Now Ghana is in decisive and competent hands spearheaded by Nana Akufo-Addo and his right-hand man Dr. Bawumia. But the irony here is that Mr. Mahama is also witnessing and learning in plain sight how to run 21st century government efficiently; so, he is claiming and misleading Ghanaians that he should be given another chance at the presidency because he thinks he can do better than the people he is now watching do the job competently.

It is easier said than done, as the saying goes. Given the playing field, former President Mahama could not kick the ball skillfully to score but once on the substitute bench, he has now found his playing skills or political mojo, and sadly he has considerable number of Ghanaians trapped into his pranks. Let all Ghanaians who really understand and appreciate peace, prosperity, abundant food supply, free education, job creation, mortal hatred for the so-called “slay queen subculture” and the like, say no to JD Mahama and his brand of politics on this December 7.

Stated differently, December 7, 2020, elections should not only be a vote of “thanksgiving” for all the various social safety net programs Nana Addo-led government has put in place but also, it must be the day that once and for all Ghanaians vote for relative quality governance and soundly reject JD Mahama’s politics of greed, insults, subterfuges, “slay queen culture” and in the process sign off and hand over the former president’s “political obituary” note for him to take to Bole Bamboi or Dubai to enjoy his accumulated wealth over there. Ghanaians deserve far better than Mahama’s mediocre leadership!

Bernard Asubonteng is a US-based writer and American Government lecturer.