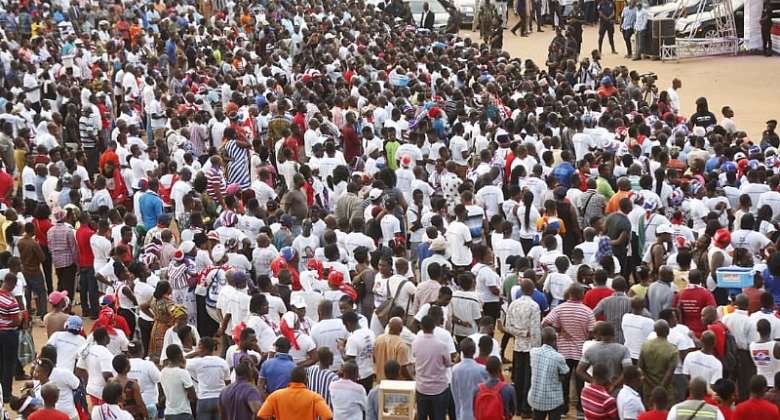 Before the focus is shifted to the main theme of the today's discourse, let us briefly talk about voter apathy. Some of us may not be here in Ghana now as the 2020 general election campaign is fully engaging all its firing cylinders, yet there are a lot of political developments happening in this country that are all too familiar to a considerable number of us in diaspora. Among some of the developing political phenomena, as this year's elections approach, is the so-called voter apathy.

Like several sociopolitical concepts, voter apathy cannot be pinned down to a precise definition; because, similar to its definition, voter apathy has multiple trigger points or causes, thereby making it quite dicey to try to define it in narrow sense. Nonetheless, apathetic voters are known to display specific pattern of mindset or behaviors almost across all political cultures under representative democracy.

In Ghana today, voter apathy seems to have gained currency in the nation's body politic, especially as the country nears the tail end of the general electioneering season. Listening or paying close attention to how voter apathy is discussed or thrown about all over the place, it is obvious many Ghanaians may not have taken time to have some form of a good understanding of what constitutes the closest meaning of voter apathy.

In fact, many of the discussions, a cross-section of Ghanaians, including some media pundits, consider being voter apathy is rather 'political alienation.' Surely, sustained political alienation can lead to voter apathy but the difference between the two developments is crystal clear. Voter apathy can be defined as a show of indifference or 'l-don't-care' attitude toward the general political process to the extent that it heavily impacts the citizens' participation in the voting process across the board.

In other words, voter apathy promotes the cynical belief among the ordinary citizens that all politicians and the parties they represent are the same—regardless of who is in power—so there is no point in wasting one's time to vote for any of them to repeat the same old things. For example, if any Ghanaian is showing voter apathy this 2020 election time, then it's likely the person is not going to vote, either for the ruling NPP government or for the main opposition party, NDC, or other small parties in the country, period!

This columnist is suggesting that one cannot correctly claim he or she is having 'voter apathy' mindset and the same time will take part in voting in the elections. That is to say what a sizable number of Ghanaians plus some of the 'media experts' are talking about is basically political alienation syndrome rather voter apathy.

People who feel they are alienated politically tend to vote in the electoral process, but they may also be constrained by deep feelings of powerlessness, underrepresentation, or not valued to the political process, and so on. This sense of political alienation may stem from the fact that some party sympathizers or some groups of followers think rightly or wrongly that a handful of party members or well-connected few are 'benefitting' from the party's victory, while the rest can't even get telephone access to their elected officials or policymakers.

As this belief of political alienation becomes sustained over time, massive voter turnout may be suppressed, as anticipated. Nevertheless, whatever the pent-up discontentment created by the alienation can also serve as the basis for inspiring increased voter turnout among the electorate whose sense of powerlessness regarding the prevailing political conditions is relatively modest; especially, for those citizens whose political party is in the opposition. It has been stated that 'he who that is down needs fear no fall.'

The foregoing presupposes that former President Mahama-hijacked NDC will definitely be the beneficiary  or will have the upper hand here if many of the followers or sympathizers of the ruling NPP allow political alienation to cloud their thoughts and hence their willingness to vote in their numbers. The NDC is already out of power, so the question of powerlessness is a reality for them now, and that reality is the main driving force pushing the party to fight hard to regain power it lost to NPP in 2016.

The irony here is that looking at the trends in Ghanaian politics, it is the opposition party or NDC whose followers/sympathizers may not entertain any signs of voter apathy or political alienation in that they are nostalgic for power; so they can afford to defer any lingering alienation or apathetic attitude until they regain control of power. In contrast, the ruling party may tend to be relatively complacent and take things for granted, forgetting that many Ghanaian voters have the general perception that once they vote a party into power, that party is obligated to meet (even) the personal needs of all the followers who voted. If that doesn't happen, many of them begin to feel alienated politically.

In short, any exhibition of political alienation on the part of the sympathizers or many of the followers of the ruling NPP is exactly what the Mahama-hijacked NDC wants to happen. Naturally, the NDC's followers have little reasons to stay home on the voting day, but they have every incentive to discourage the followers of the ruling party not to come out to vote massively. Evidently, one of the Comrade of Mahama's political strategies borders on making a good number of the ordinary Ghanaians forget about 'dumsor', the deplorable economy that was snuggled into an overprotective and sulfuric-fuming armpit of the IMF, uncontrollable environmental degradation via galamsey, among others.

For the Mahama-run NDC, by encouraging the Ghanaian media to put that energy of the so-called voter apathy or political alienation out there, the average Ghanaian will be tempted to forget the good things, about the numerous social intervention projects under Nana Addo's government. Certainly, it is these generalities that Mr. John Dramani Mahama desperately wishes for Ghanaians to feast on until the Election Day in December this year. Political alienation, indeed, stifles voter turnout and it often goes against the party in power. The NPP cannot sit back and allow this to occur.