NPP Must Have Eagle Eyes On National Security While Campaigning!! 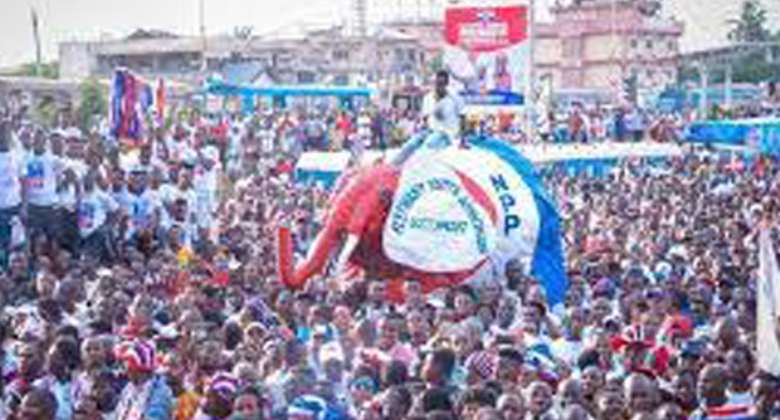 Symbols or to some extent non-verbal gestures and/or body languages play significant roles in human lives. For example, in terms of symbolism of razor-sharp eyesight, the eagle has come to symbolize an all-seeing creature or embodiment of that which is acute eyesight or keen vision. Thus, the universal expression of 'looking at something with eagle eyes' evokes the mental imageries of sharpness, sense of urgency, attentiveness and the like.

As this nation is busy in the full political campaign overdrive toward the December 2020 general elections, there is the possibility or the temptation for the national security apparatus to take its eyes off the ball unintentionally. The country's national security network may be doing an excellent job. However, it is probable that in the high-pitched electioneering season, there can also be distractions and near lack of focus on the part of the incumbent government with regard to national security issues, because more attention tends to be shifted to reelection campaigns.

As the above scenarios unfold, some agent provocateurs in the society can exploit the cracks within the façade of the security system by creating all kinds of violent acts so as to construct a gloomy storyline that the ruling government is not up to the task of maintaining peace in the country. Given the entitlement-centered predisposition, including the sheer desperation radiating out of Mr. JD Mahama's presidential candidacy, nothing should be taken for granted regarding the security of the nation. The former President is hungry for power and has shown the burning desire to achieve his messianic goal.

This is why the ruling NPP administration under Nana Akufo-Addo must keep an eagle eye on the country's security architecture. It is clear that during this general election year the leader of the main opposition party (Mr. John D. Mahama) is unquestionably desperate for political power to the point that he is capable of doing anything to accomplish his insatiable presidential ambitions. He has reiterated it on several occasions—implicitly if not directly—that when it comes to creating societal disorder the party (NDC) he currently leads is the 'Alpha and Omega' of the violent activities in Ghana.

Almost all reasonable-minded Ghanaians have an idea about ex-President Mahama's capabilities when he was the president of this country. Clearly, his subpar performance as the leader of this nation led to his massive electoral defeat and hence his humiliating rejection by the broad mass of the Ghanaian electorate. Yet, barely four years now, Mr. JD Mahama is crisscrossing the country with brutish arrogance and self-righteousness rooted in hypocrisy, manipulation and a sense of entitlement that he deserves four more years at the nation's presidency—to do what? Your guess is as good as mine!

In fact, a fair-minded comparison of the current government's performance under Nana Akufo-Addo and the one under the previous regime of former President Mahama is strikingly clear as day and night. For those of us who genuinely appreciate and can also tell the difference between relatively quality or fast-growing economy on one hand, and an underperforming economy on the other, none of us needs anyone to point out that Mr. Mahama presided over decadent administration. All the socioeconomic metrics today indicate Nana Addo-Bawumia government is faring better than their predecessors.

If not for anything at all, Ghana's economic trajectory under the direction of JD Mahama's NDC government was tumultuous, suffice it to say Ghana's economy was in shambles, leading the then President (Mahama) to send a distressed call to the IMF for help. Surely, this nation's economy was so torn apart that the only viable option to keep Ghana afloat was to put the country's economic management under the supervision of the IMF-HIPC program. This is the 'caliber' of leadership ex-President Mahama provided the country, and is desperately trying again to persuade 'forgetful' Ghanaians to give him another chance to come tear things down one more time.

Evidently, ex-President Mahama is adept at the science of manipulation and pretense. He can or he has the ability to create social confusions or chaos without any traces of his fingerprints. Almost all the insults and threats of violence from the NDC's communication team, including other top echelons of the main opposition party, are under his watchful eyes, because Mr. JD Mahama has the ultimate power to nip them in the bud if they are not in his supreme interest.

What is unsettling and scary, though, is that Mr. Mahama is filthy rich and an influential as ex-President. No doubt he has a lot of people loyal to him because as President, he might have used the state resources to provide some 'freebies' to his diehard followers. Hence, they are willing to do anything to help their idol, the former President, back to power to milk Ghana dry again to support their ostentatious lifestyles.

It wasn't a mere coincidence when the Chairperson of the NDC, Mr. Samuel Ofosu-Ampofo, was allegedly caught on audio tape plotting widespread violence throughout the country in the course of this year's general election campaign. Certainly, former President Mahama and his entire NDC followers are aware that they can't match the Nana Addo government 'boot-for-boot' when it comes down to prudent economic management and social intervention initiatives for this nation.

So, what is the alternative then for Mr. JD Mahama and political poodle? Based on the NDC chairman's alleged secret plans to create chaos in Ghana to make Nana Akufo-Addo's regime look bad or appear as if the President is incapable of maintaining law and order, it also stands to reason that the sad news of the murder of Honorable Ekow Quansah Hayford, the MP for Mfantseman Constituency, may not be the cruel work of the so-called armed robbers.

It could also be a cold-blooded contract killing job directed at some 'soft targets' to create the nervy impression that Ghanaians are somehow not safe under Nana Akufo-Addo's ruling NPP government. Politics, they say, can be messy, especially if many of the main players are greedy and self-servers. It is why the NPP government must keep an eagle eye on the national security as Ghana enters the last stretch of the 2020 presidential campaign.