Really? “A Northerner Muslim can’t lead NPP to victory in 2024”? 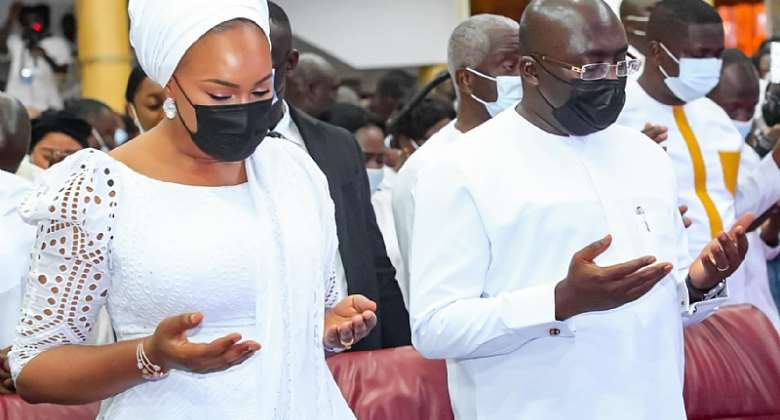 Many reasonable-minded sympathizers/supporters of the ruling New Patriotic Party (NPP), for smart and strategic reasons, have decided to keep mute about making any comment regarding who will emerge flagbearer or will lead the “Elephant Party” to the 2024 general elections. Think about this for a moment: The general elections were conducted barely a month ago. The victors of the just-ended presidential election—Nana Akufo-Addo and his running mate Dr. Mahamudu Bawumia—have not yet been sworn in as president and vice-president respectively, as the Constitution requires.

Yet, some so-called party activists or self-described “ardent supporters” of 2024 potential presidential aspirant(s) within NPP have started making insanely self-destructive and pointless claims that “a northerner or a Muslim can’t lead Danquah-Busia-Dombo forebears to electoral victory.” For those who are holding these puny and suicidal viewpoints, the only way, in their warped thinking, a “northerner Muslim” can help NPP secure success in any future presidential election is to put a “Northerner Muslim” on the vice-presidential slot.

Honestly, it is mind-boggling to even contemplate in this 21st century that a sane and rational Ghanaian will entertain these kinds of primitive, prejudicial, and clannish predisposition in an attempt to support a preferred candidate or promote a political party’s future prospects. This present discussion has been necessitated by an article that appeared in MyNewsGH portal and attributed to a “former Cape Coast constituency executive” of the NPP, quoted as saying “You can’t lead NPP as a Muslim and a Northerner” (MyNewGH.com; Jan. 2, 2021).

The purpose here is not necessarily to personalize this discussion but to point out some of the serious flaws inherent in the politics predicated on suicidal effusions that may come from any party member/follower, such as the one from the “former Cape Coast constituency executive.” First, it is one thing to say a particular individual is the most winnable candidate in that his/her name recognition is matchless in the public arena, so one’s party members must seriously consider his or her candidacy. But at the same time, it is entirely another thing to claim that one’s religion and tribal backgrounds should be the benchmarks for choosing a party’s flagbearer.

Using the preceding train of thought, what empirical evidence substantiates those (flawed) worldviews clothed as “power-winning formula”? Interestingly, the said article states that “Here is the power-winning formula: A Southerner Christian and a Northerner Muslim. And, as I mentioned, it has almost worked to perfection over the years.” Contrary, nothing has “worked to perfection over the years” in human life in general, including the NPP’s electoral endeavors since the party’s formation in early 1990s.

Indeed, nothing is perfect in this imperfect world, because if that were the case, and going by the so-called “power-winning formula” logic, then former President Kufuor and his “Northerner Muslim” would have won the first time against the late ex-President Rawlings in 1996, but that wasn’t the case. By the same token, Nana Akufo-Addo paired with “Northerner Muslim” for about three consecutive times before winning Ghana’s presidency at his third attempt. So, the “Southerner Christian and a Northerner Muslim power-winning formula” is a patch of delusional political imaginations. One needs realize there are many other contributory factors significant enough that the afore-stated distorted line of thinking ignores to consider.

Here is another incoherent claim the “Southerner Christian-Northerner Muslim” ramblings make that is difficult to understand. It says “A market-sensitive party is always able to discern the heartbeats and thoughts of the electorates for right decisions. Right decisions are key in politics and, all other things being equal, they always lead to right results.” What exactly is meant by “market-sensitive party” and what does “right decisions” in this context mean?

The cognitive dissonance here is quite striking, given that no “market-sensitive party” as theorized by the “Former Cape Coast constituency youth organizer” can truly make “right decisions” based on some convoluted religious and ethnocentric-geographic assumptions. And to address the question: “Can the good people of the party [NPP] see what I see and intervene to prevent the party from committing this needless suicide in the name of changing the so-called “Akan Party” narrative?” (See MyNewsGH; Jan 2, 2021). Of course, no rational-thinking or genuine sympathizer of NPP will think and cling to backward belief that somehow the party’s “power-winning formula” is to always have “Southerner Christian” as presidential flagbearer and “Northerner Muslim” as vice-presidential candidate. When and who created this illusionary “power-winning formula” in the party?

Unfortunately, the “Akan Party” mantra peddled by some detractors of the UP tradition is real, believe it or not. It cannot be easily swept under the carpet for one’s political convenience. Besides, the figurative argument, linking Dr. Bawumia’s presidential candidacy to seeing “a table with a gun on it” and somehow the entire party members “being pushed towards the gun to be shot in the head in 2024,” is nonsensical. Isn’t it equally true one can also have an empty gun on the table so the fact that you “see a table with a gun on it” doesn’t mean the “fabled gun” is loaded with bullets; it could also be a toy gun? What is the point?

No doubt, Mr. J. D. Mahama will show up again as his party’s—National Democratic Congress (NDC)—presidential candidate in 2024. As of now, there is no viable candidate super rich and most powerful enough within NDC to pose any competitive threat that will lead to defanging JDM’s political tentacles. His post-election intransigent position for not conceding defeat to Nana Akufo-Addo is part of his scripted political calculus designed to manipulate Ghanaian’ public opinion, that NPP undeservingly snatched victory from him.

In effect, Mr. Mahama is cynically creating an aura of political sympathy around himself today to be used in the near future election that he may contest. At that point, too, one of his major campaign messages will definitely be in the form of teasing or picking on Vice-President Bawumia in case the NPP delegates mistakenly bypass him for the so-called “Southerner Christian” to be the party’s flagbearer in 2024.

Certainly in 2024, former President Mahama and his propaganda machinery will keep parroting the mythical but age-old “Akan Party” storyline that “Vice-President Bawumia should have known all along that NPP will never allow someone from the north to lead the party as presidential candidate.” Undoubtedly, the foregoing negative ethno-religious narrative against the Danquah-Busia-Dombo tradition will find some traction among some skeptical or uncommitted Ghanaian voters.

The point is if NPP takes its direct lineage from Danquah-Busia-Dombo ideological DNA, then why on earth will any sensible member/sympathizer of the party suggests a “Northerner Muslim” can’t lead NPP to victory? Also, one significant question to consider is: where did Chief S. D. Dombo come from? Was Chief Dombo not from the northern part of Ghana and one of the most influential leaders/statesmen of the Danquah-Busia-Dombo tradition? Come, on, folks!

Well, as hinted earlier, some of us think it is unpractical to count one’s eggs before they’re hatched, but if that is the game plan now then let’s go along with it. No question, in the Danquah-Busia-Dombo party today, one of the best brains, economic managers, communicators, as well as likable and charismatic leaders is “Northerner Muslim” Dr. Bawumia.

At any rate, I’m also a former constituency youth organizer in Manhyia Constituency, Kumasi, in the early 1990s, but now I reside in the United States. I have been following NPP ever since, and I can bet the last dollar in my pocket that if the party wants to stay in power after eight years of Nana Addo’s administration, the “unstoppable and winnable ticket” will be Dr. Mahamudu Bawumia paired with Dr. Matthew Opoku-Prempeh, case closed! Any other combination else is a losing proposition for the party in 2024, period!

Bernard Asubonteng is a US-based writer and American government professor.