This Is No Way To Treat A Former First Lady! 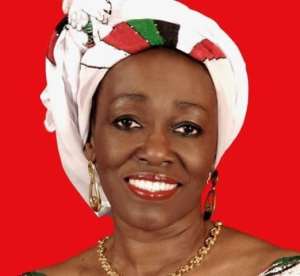 Whilst reflecting on the reasons why the American electoral college system rejected the former first lady, Hillary Clinton at the polls though she won the popular vote, I have been wondering whether it is just because people do not like former first ladies to succeed their husbands in the highest office of state despite their experience and capability.

It is certainly true that political campaigns do not always reward the most qualified candidates and in Ghana which goes to a general election on December 7 2016, another former first lady, Nana Konadu Agyeman Rawlings attempts for the first time to win office as president several years after her husband Jerry John Rawlings stepped down as president. But in these days of ‘fake news’ and ‘post truth’ politics, the vision and clarity offered in the message of the smaller parties have been drowned under the campaign noise of the larger parties in but the traditional and social media.

The journey by the NDP candidate Nana Konadu in getting her name on the ballot paper has been long often thwarted many times by officialdom. In 2012, after she had formed her own party, the National Democratic Party and been selected as their presidential candidate, the Electoral Commission disqualified her because the forms had not been properly completed. In this coming election, she was again initially disqualified by an overzealous Electoral Commission but that unfair disqualification was overturned by the Supreme Court against an appeal from the Electoral Commission. So, she stands as a qualified and competent and indeed capable candidate in this election.

But who is this former first lady who wants to stand to be president? She is a mother who has been protective of her children and a wife who has been extremely supportive of her husband to the extent that if she had not pulled heaven and earth to get him a fair trial, Jerry John Rawlings would have been executed without trial for his 15th May 1979 misadventure or revolt, and if that had happened, there would have been no 4th June AFRC, or 31st December PNDC or indeed the victory of NDC at the polls in November 1992.

She is also a multi-talented and accomplished creative person who graduated with a degree in Visual Design and who worked for several years in a creative marketing environment. In her youth, she excelled in sports and was a champion in both track and field as well as in other sports. She was a member of a student pop group and if I correctly remember she played in several pop chains during the latter part of the 1960s combining the academic with the creative. She also built a movement that encouraged women in community development and small scale enterprise, championing the cause of women and became an inspiration to many young women. Her signature headscarf and her promotion of different brands and colours of our Kente cloth not only attests to her artistic flair and passion for design means that she is always tastefully dressed, a good ambassador the promotion of our culture.

What of the task of statecraft? It is well known that she was responsible for steadying the ship of state during her husband’s period as military ruler and helping to search out and vet people who would be appointed to important positions in government. Her influence was wide ranging and many credit her for being a moderate influence on her husband she was as much an equal partner in the leadership if not the power behind the throne.

Nana Konadu has been much vilified. When the NPP took office in 2000, they spent the next eight years trying to put her in jail on trumped up charges of causing financial loss to the state because she had led her organisation to acquire one of the state industries that had been sold. Fortunately, they were unsuccessful in this quest though they managed to jail quite a few people around Rawlings. The shame of it was that this same Kufour government was chopping left, right and centre with their hands and feet and yet the Mills government did not do much to prosecute them.

It is however the treatment that she got from the party that she and her husband birthed in 1992 that seems so unfair and sad. Having helped to keep and maintain relationships during the PNDC period when there were no defined roles and rules, on the return to multiparty democracy, a lot of opportunistic, careerist and ambitious politicians entered in the party with a lot of jockeying for positions and with no defined role in the party, her influence in the party must have started waning. Where the 31stDecember Movement reigned supreme others tried on a counterbalancing movement, the Veranda Boys and Girls movement to carve their own power base, now there were structures and strictures and her role was now being usurped by sycophants and all sorts of social climbers intent on amassing as much wealth as they could. Even those who she had sponsored and opened doors for were now suddenly questioning her intervention in running the country. Here she was, almost a lone voice asking her party to arrest the onset of corruption and yet no one would listen to her.

She fought her corner and tried to wrestle control of the party but the long years in opposition meant that though she would attain the position of Vice Chairperson in the NDC, she no longer commanded the influence necessary to change things around within her party. To further prove her determination, she challenged Mills for leadership of her party in 2012 by which time the intra party politics had become more intense and even more treacherous, to the extent that her own party rejected her leadership challenge completely.

Forming her own party became an inevitable result of the betrayal from her former friends and political colleagues but her passion for politics has not been dulled at all and her determination to help root out the corruption that she sees as a feature of our politics is still burning which is why she has decided to contest to contest this election.

But politics can be dirty and strong former first ladies instead of being applauded are normally vilified by the people around them. Winnie Mandela was betrayed by her own and there was a lot of political intrigue that resulted in her being removed as the Mother of the ANC Womens League. Grace Mugabe is suffering the same plight as she seeks to succeed her husband and the fact that Clinton tried but did not win the American presidency this year despite, in her case, being sponsored by her party should be enough indication to what the people think of former first ladies. In the Clinton case, some believe that Bernie Sanders would have fared better and others feel that, Elizabeth Warren would have beaten Donald Trump to become the first woman president in America.

On the rare occasion where former first ladies have succeeded their husbands into the position of president, as in Isobel Peron and Cristina Fernández de Kirchner of Argentina, they followed on the popularity to their husbands, they did not wait to run at their own appointed time and Nana Konadu should have been offered a more substantive role in her party or in the government of President Mills.

Nana Agyeman Konadu Rawlings, knows the ins and out of running a country, she recognises the flaws of her former party, the NDC and had suffered the sharp end of the vindictiveness of the NPP and she certainly has something to offer the country.

She is competent, capable and as qualified as any of the candidates standing, I hope that the people of Ghana consider her achievements as a servant to the people and consider her candidature. It is not often in Africa that women stand for the highest office of the land and her bold move should not only be welcome but applauded.

Ghana must not be a two party political state, it seems so because the smaller parties do not want to form a much need coalition and if Nana Konadu and her National Democratic Party do not win, it will be a crying shame for all her efforts and it certainly will be no way to treat a former first lady.

Unfortunately, I do not have a vote in this election, but if I did I would have had to vote for the CPP candidate Ivor Greenstreet who has impressed me much in this campaign with his vision of a New Ghana under a New Covenant.

Ade Sawyerr is a partner in the diversity focused management consultancy Equinox Consulting that works on issues relating to economic development of disadvantaged communities and social cultural and political issues of African heritage people in the Diaspora. He can be reached at [email protected], followed @adesawyerr, and read at https://adesawyerr.wordpress.com