Must Africa Be Worried About This New War In Europe?? 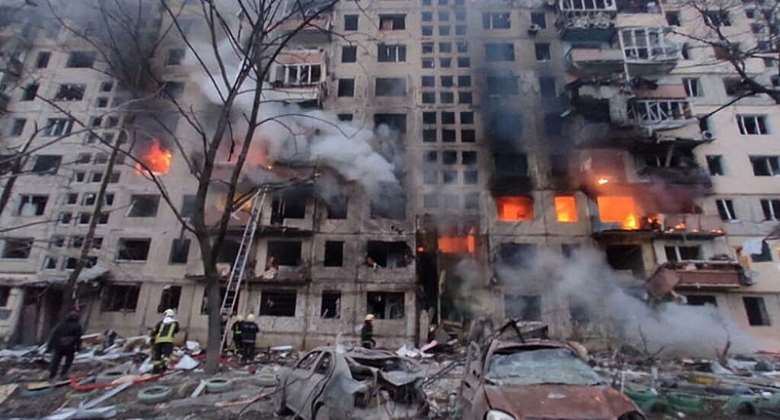 There is no reason or justification for this new war in Europe however the concept of only one superpower in the world is not a position that I am comfortable with and in my book as a pacifist, the earlier there is a ceasefire the better it is for the world.

War is a bad thing, at the end of the day there are no winners, people are killed property is destroyed and people are displaced, they become homeless, and the lot of a refugee is dehumanizing.

Russia must be roundly condemned for invading Ukraine, an independent country that was created in 1991 when the old Union of Soviet Socialist Republics fell apart because Russia at the centre could not hold the different republics together in a coherent whole. Ukraine has a right to choose how it is governed but it would seem that because of past associations Russia still thinks that it has a right to be ‘protective’ of the foreign policy direction of the country.

Just as we all thought that the Cold War that wrecked so much havoc in relationships between superpowers had ended and that we had been ushered into a unipolar world with the USA emerging as the only country that could afford all the military arsenal and the personnel to go with it, we have Russia now deciding that a military putsch into another country can be justified based on ‘demilitarisation’ and showing up two fingers at the United nations

My interest in the events in Ukraine harks back to what happened in post-independence Africa because our colonial masters felt that, despite their long-distance away, they must intervene in shaping our political destiny.

“We can build our own global army that will help to keep incursions from foreign countries away. “

The major question is whether Africa, very much second-class participants in the UN will be asked to take sides and whether and what the penalties will be if we decided to stay aloof. Of course, this war may be as much a military as well as an economic and political war, so what can we do in Africa to mitigate the adverse effects of this war.

On the military front, we have several options. We can build our own global army that will help to keep incursions from foreign countries away. The Africom option, which has allowed US military bases to be established in some countries in Africa, may put us in danger if a full-blown hot war develops out of this crisis. The problem with Africom is that it has not done anything against inter-African conflicts, and we are hearing very little being said about the Ethiopian incursion into Tigray whilst the Russia-Ukraine conflict has taken centre stage in our news bulletins. Another option is to impose sanctions on the Russians and refuse to buy military equipment from them. Indeed, I wonder why we purchase so much equipment when we produce few and only end up killing each other with them or using them to execute redundant coups in our countries. perhaps a better option is to go to the UN and ask for a unilateral conventional weapons freeze, though that will be seen as a stance against the arms manufacturers who are the only ones to profit from war.

On the economic front, we have already started feeling the adverse effects, prices of fuel will go up and the cost of food will rise as a result. Perhaps this is the time for African countries to think through the need for our luxury goods and examine our policies for industrialisation through building tooling capacity, that may help us to produce simple machines to help develop our economies. In times of war, people take drastic action on cutting their expenditure. A cost reduction period is imminent for us if this war continues and we may need to go back to looking at our consumption of foreign food items such as rice, noodles, and wheat and increase the production of our own local foods. We may have to park all our luxury automobiles now that the cost of fuel is going through the roof.

This is the period where we must strengthen our resolve on our import substitution front and start looking for answers as to why some of our countries that produce crude oil need to export the crude and then go on to import petroleum products and whether the necessity that war brings will spur us better management of our economies but alas, I have already heard some leaders blaming the war for their economic mismanagement,

Politically we need to start developing our own strategy for engagement with the rest of the world. We must forge closer links with the Caribbean and lean on the huge African heritage diaspora that exists in the rest of the world. I listened with pride to a very powerful speech by the Prime Minister of Barbados when she attended the 65th Independence Day celebrations in Ghana recently. She called for Africa to come together yet again, for us to start doing business with each other, to include those in the Caribbean in our discourse about economic and political issues. She called for the realism of pan Africanism to be implemented in our time.

Political unity is still possible if the African Union will look at it with some urgency. We have the powers that be fighting over the concept of neutrality in Europe. The issue is, who will fight for us if another country invades? Who will condemn the invasions, who will impose and enforce sanctions on the aggressor country?

It is a shame that in this 21st century, we have the same superpowers fighting for control of the world with Africa looking in from the side-lines, the Ukrainians even in their time of distress did not think much of helping our students in their countries to safety, they preferred to take care of this own first.

Let no African head of state think that there is much they can do to intervene in this war, we may shout all we care but we must be careful – if there is an escalation it will come to Africa, if the Chinese join, we may need to reappraise our relationship with them. Several years ago, in 1966 when the president of Ghana Osagyefo Kwame Nkrumah was asked by the commonwealth to intervene in the Vietnam war, it ended up being just a ruse to get him out of the country for a military coup d’état against him.

Ade Sawyerr is a management consultant at Equinox Consulting who works on enterprise, employment and community development issues within the inner city and black and minority communities in Britain. He comments on social, economic and political issues and can be contacted at www.equinoxconsulting.net or [email protected] .