Who Is An African – The Pan-Africanist Solution? 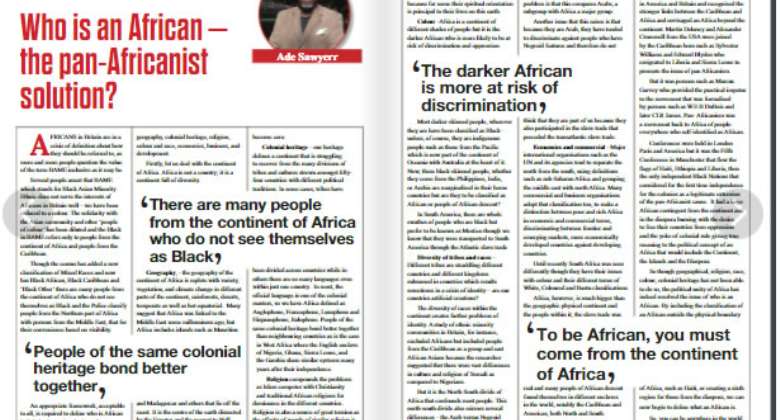 AFRICANS in Britain are in a crisis of definition about how they should be referred to, as more and more people question the value of the term BAME inclusive as it may be.

Several people assert that BAME which stands for Black Asian Minority Ethnic does not serve the interests of Africans in Britain well – we have been reduced to a colour. The solidarity with the Asian community and other ‘people of colour’ has been diluted and the Black in BAME refers only to people from the continent of Africa and people from the Caribbean.

Though the census has added a new classification of Mixed Races and now has Black African, Black Caribbean and ‘Black Other’ there are many people from the continent of Africa who do not see themselves as Black and the Police classify people from the Northern part of Africa with persons from the Middle East, that for their convenience based on visibility.

An appropriate framework, acceptable to all, is required to define who is African in Britain. I examine the issue from the context of important attributes of geography, colonial heritage, religion, colour and race, economics, business, and development.

Firstly, let us deal with the continent of Africa. Africa is not a country; it is a continent full of diversity.

Geography, – the geography of the continent of Africa is replete with variety, vegetation, and climate change in different parts of the continent, rainforests, deserts, temperate as well as hot equatorial. Many suggest that Africa was linked to the Middle East some millenniums ago, but Africa includes islands such as Mauritius and Madagascar and others that lie off the coast. It is the centre of the earth dissected by the Equator and the nearest to Null Island where the latitudes and longitudes become zero.

Colonial heritage – our heritage defines a continent that is struggling to recover from the many divisions of tribes and cultures strewn amongst fifty-four countries with different political traditions. In some cases, tribes have been divided across countries while in others there are so many languages even within just one country. In most, the official language is one of the colonial masters, so we have Africa defined as Anglophone, Francophone, Lusophone and Hispanophone, Italophone. People of the same colonial heritage bond better together than neighbouring countries as is the case in West Africa where the English enclave of Nigeria, Ghana, Sierra Leone, and the Gambia share similar systems many years after their independence.

Religion compounds the problems as Islam competes with Christianity and traditional African religions for dominance in the different countries. Religion is also a source of great tension as the affinity of people of similar religion is sometimes stronger than their tribal bond because for some their spiritual orientation is principal to their lives on this earth.

Colour -Africa is a continent of different shades of people but it is the darker African who is more likely to be at risk of discrimination and oppression.

Most darker-skinned people, wherever they are have been classified as Black– unless, of course, they are indigenous people such as those from the Pacific which is now part of the continent of Oceania with Australia at the heart of it.

Now, these black-skinned people, whether they come from the Philippines, India, or Arabia are marginalised in their home countries but are they to be classified as African or people of African descent?

In South America, there are whole swathes of people who are black but prefer to be known as Mestizo though we know that they were transported to South America through the Atlantic slave trade

Diversity of tribes and races – Different tribes are straddling different countries and different kingdoms subsumed in countries which results sometimes in a crisis of identity – are our countries artificial creations?

The diversity of races within the continent creates further problems of identity. A study of ethnic minority communities in Britain, for instance, excluded Africans but included people from the Caribbean as a group and east African Asians because the researcher suggested that there were vast differences in culture and religion of Somali as compared to Nigerians.

But it is the North-South divide of Africa that confounds most people. This north-south divide also mirrors several differences – the Arab versus Negroid divide and the economic and business divide. A lot of people from sub-Saharan Africa have contended that those from the north are Arabs and not Africans – my problem is that this compares Arabs, a subgroup with Africa a major group.

Another issue that this raises is that because they are Arab, they have tended to discriminate against people who have Negroid features and therefore do not think that they are part of us because they also participated in the slave trade that preceded the transatlantic slave trade.

Economics and commercial – Major international organisations such as the UN and its agencies tend to separate the north from the south, using definitions such as sub-Saharan Africa and grouping the middle east with north Africa.

Many commercial and business organisations adopt that classification too, to make a distinction between poor and rich Africa in economic and commercial terms, discriminating between frontier and emerging markets, more economically developed countries against developing countries.

Until recently South Africa was seen differently though they have their issues with colour and their different terms of White, Coloured and Bantu classifications.

Africa, however, is much bigger than the geographic physical continent and the people within it; the slave trade was real and many people of African descent found themselves in different enclaves in the world, notably the Caribbean and Americas, both North and South.

The discussions on pan-Africanism were started by scholars who had studied in America and Britain and recognised stronger links between the Caribbean and Africa and envisaged an Africa beyond the continent. Martin Delaney and Alexander Crummell from the USA were joined

by the Caribbean born such as Sylvester Williams and Edward Blyden who emigrated to Liberia and Sierra Leone to promote the issue of pan Africanism.

Pan- Africanism was a movement back to Africa of people everywhere who self-identified as African Conferences were held in London Paris and America but it was the Fifth Conference in Manchester that flew the flags of Haiti, Ethiopia and Liberia, the only independent Black Nations that considered for the first time independence for the colonies as a legitimate extension of the pan-Africanist cause. It had a large African contingent from the continent in the diaspora burning with the desire to free their countries from oppression and the yoke of colonial rule giving true meaning to the political concept of an Africa that would include the Continent, the Islands and the Diaspora.

So though geographical, religion, race colour, colonial heritage has not been able to do so, the political unity of Africa has indeed resolved the issue of who is an African. By including the classification of an African outside the physical boundary of Africa, such as Haiti, or creating a sixth region for those from the diaspora, we now begin to define what an African is.

Ade Sawyerr is a management consultant at Equinox Consulting who works on enterprise, employment and community development issues within the inner city and black and minority communities in Britain. He comments on social, economic and political issues and can be contacted at www.equinoxconsulting.net or [email protected] .