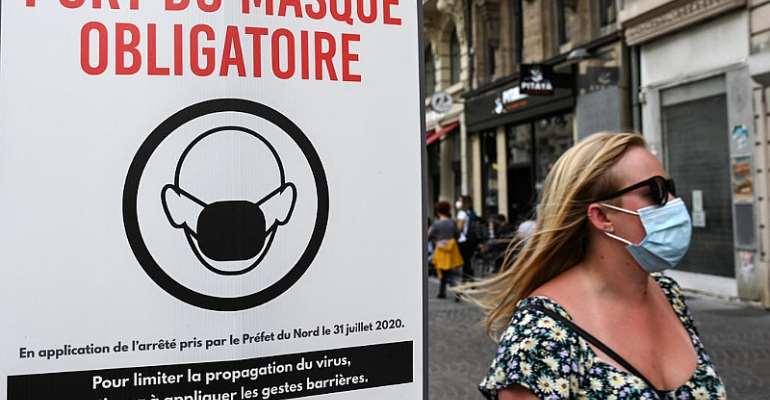 France's scientific council, which is in charge of giving recommendations to the government in handling Covid-19 management, has urged leaders to react quickly in the coming days to counter the alarming rise in the number of infections. This comes ahead of a Defence Council meeting on Friday, where some measures are expected to be announced.

The president of France's Scientific Council, Jean-François Delfraissy described the progression of the epidemic in France as “worrying” on Wednesday.

“The government will most likely have to make some difficult decisions in the coming weeks,” he said.

This comes as health authorities reported 8,577 new cases of Covid-19 on Wednesday over a 24 hour period, much higher than the day before at 6,544.

The number of people in hospital with Covid has also jumped up to 5,003, with 599 in intensive care.

Sudden jump in figures
“We tend to be falsely reassured,” Delfraissy explained in a press conference on Wednesday, “because the increased spread of the virus is not necessarily having an impact on the health services at present, but the situation could change bringing a sudden exponential increase in a second phase.”

In a separate development, the scientific council has said it is in favour of reducing the quarantine period from 14 to 7 days for infected people and their immediate contacts.

“The transmission of Sars-CoV-2 from infected people is between 2 days before symptoms appear and 5 days afterwards, and only in rare cases above the 8th day,” the council said in its report last week.

A decision, along with other announcements is likely to be presented on Friday following the weekly Defense Council meeting.

What measures?
The French government, based on recommendations from experts is mulling over whether to restrict gatherings, even in the private sphere, in line with England's recent decision to limit gatherings to six people as of next Monday.

“This is one option on the table,” Bruno Lina, a member of the scientific council, told France Info on Thursday, in reaction to this kind of method.

“There is no magic number, obviously if you have a group of 70 people; there is ten times the chance that someone in the group will be sick than in a group of 7.”

“It's all a question of efficiently defining one's regular contact group so that one can maintain a social life at the same time as limiting a broad mix of people,” he said, adding that the challenges ahead would need to be faced collectively.

"Test, trace, isolate"
He goes on to say that he doesn't believe reinstating a general lockdown is necessary, it would only be as a last resort, however, putting in place localized measures would be preferable where infection numbers are higher, for example in the south of France, where several clusters have been reported.

He suggests that more efforts need to be made when it comes to “testing, tracing, isolating,” which as present is conducted in a somewhat “haphazard” way.

There needs to be, he insists, better access to free testing for people – dividing them into groups – those who are genuinely ill and need to get results quickly, and isolate if necessary. Then there are those people who are not sick but wish to reassure themselves before they visit elderly relatives or go on a trip.

Bruno Lina also insists that more awareness around what 'isolation' means in real terms would be useful for the general public so as to render this process more effective, and perhaps more acceptable.

Isolation and symptoms
“Isolation must begin on the first day of symptoms, not after the results are received. If you have symptoms on Sunday, and you're tested on Tuesday, you must respect isolation until the following Sunday. If you do this correctly, it will help slow down the number contaminations.”

“Isolation should be observed for one week. Beyond that, there is no more risk of contamination. This is based on scientific data. Reducing the isolation period to one week, would help people to accept it better,” pointing out that this can be problematic as for now, there is no way of checking if people are respecting the isolation or not.

French President Emmanuel Macron, speaking in Corisca at a press conference on Thursday morning touched on the subject of Covid-19.

“What we must do is to adapt to the evolution of the virus, to try our best to stop it spreading, with social distancing, and adapting to new ways of organizing our social life.”