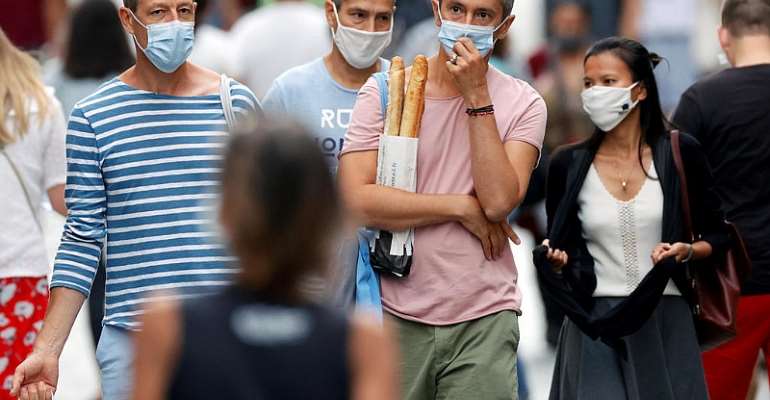 With nearly 25,000 new cases in three days, and deteriorating indicators, the Covid-19 epidemic is accelerating in France. Despite this worrying context, the French government is considering shortening the quarantine to one-week isolation.

After a peak of nearly 9,000 new cases on Friday, a record since the start of the epidemic and large-scale tests in France, about 8,500 cases were confirmed on Saturday and then just over 7,000 on Sunday, according to Santé Publique France.

The increase observed since the beginning of the summer continues to accelerate, as French people return to school and work.

58 new clusters have been detected in the last 24 hour and the positivity rate (share of positive cases, out of all people tested over 7 days) continues to rise.

Patients in intensive care
If the number of serious cases in intensive care, less than 500 according to the latest available figures, remains very far from the levels recorded in March-April of more than 7,000 -, the Health Minister Olivier Véran warned that it would increase mechanically in the wake of the rise in contamination.

"What I can tell you right now is that hospitalisation and admission to intensive care is only a reflection of the epidemic situation of a fortnight ago and therefore it is clear that in the next fortnight, there will be an increase, not massive but an increase nevertheless, in the number of serious cases," said the minister Saturday on BFM TV.

"We have a growth today of 30% in the number of cases per week, 15% in the number of hospitalisations. If we continue with this same pace, we will reach a critical situation in December in several regions of France,"  epidemiologist Antoine Fontanet warned

In Marseilles, several doctors have also stepped up to warn of the rising tension in hospitals, like Pr. Hervé Chambost (AP-HM), who ensures that "people at risk present serious forms again and are currently in intensive care".

Between 65 and 67 intensive care beds are occupied out of the 70 dedicated to the patients of Covid-19 in the Bouches-du-Rhône department in southern France, says Pr. Dominique Rossi (AP-HM).

'Quatorzaine' could be shortened
At the same time, the government on Sunday placed seven new departments in the "red zone", which now covers more than a quarter of the departments, including four overseas.

Despite this worrying context, the government is considering relaxing one of the measures applied in the fight against the coronavirus: the "quatorzaine", the two-week isolation period recommended for patients and "contact cases" (likely to have been contaminated), to limit the transmission of Covid-19, could be shortened.

The health minister said Saturday that he had asked "the scientific authorities to give an opinion on whether we cannot reduce" the isolation period for contact cases, considering that "this famous fortnight (...) is probably too long".

Access to tests is a growing concern, as the queues and the increasingly long delays in obtaining results reduce the effectiveness of the response to Covid-19.

But according to Véran, it should improve within "two, three weeks at the latest".