The “Tsunami” Of Disinformation, Distortions, And Insults Toward Nana Addo-Bawumia Administration 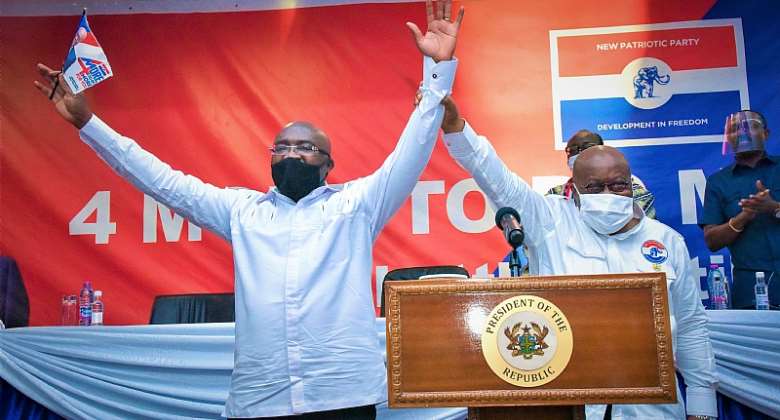 Again, it is Africa’s own famous son, Nobel Laureate Wole Soyinka, who is said to have lamented that “Only in Africa will thieves be regrouping to loot again and the [people] whose future is being stolen will be celebrating” that high-level corruption and mediocre leadership, such as the one majority of Ghanaians witnessed under former President Mahama-run NDC regime almost four years ago.

Perhaps all serious-minded sons/daughters of African descent do need to “cry blood for Africa” as the celebrated Jamaican conscious reggae star Winston Rodney (aka Burning Spear) lamented in one of his countless songs regarding this super rich continent’s decades-old struggle to disentangle itself from the shackles of illiteracy, lack of opportunities, diseases and squalor owing to widespread inept and corrupt leadership.

The unsettling irony, however, is every now and then some self-sacrificing and competent leaders with citizen-focused policies crop up in some of these African nations, but for some strange reasons, a lot of people in these countries often opt for clueless and incompetent rulers to compound and perpetuate the citizens’ miseries. It is as if a good number of people in many African countries—out of self-hatred or whatever the motivations are—don’t want to be objective enough to simply tell the real difference between quality leadership and anything-goes government like the one ex-President Mahama handed down to Ghanaians not long ago.

The crux of the matter here is that absence of people-centric or captivating policies to campaign on, all that ex-President Mahama and his NDC team have as of now consist mostly of mental exploitation of Ghanaians, disinformation, insults, and distortions of facts or policy platforms of Nana Addo-Bawumia government. One significant question to ask is that out of the fifty-three or so countries in Africa, how many of them have governments that provide meal-free or tuition-free secondary school education?

Since leading his party to a landslide victory in December 2016 elections culminating in the formation of NPP-run government, Nana Akufo-Addo with unwavering support of his brilliant VP Dr. Bawumia, have introduced many landmark socioeconomic policies, notable among them is the Free SHS. Similar to novel ideas or new experiments, the policy implementation phases are always fraught with challenges/problems all over the world. As the policy implementation phase gives way to the cost-effectiveness analysis stage or the policy evaluation phase, the programs’ outcomes begin to take more meaningful shape because of the vigorous assessments/measurements of the success or otherwise of the policy.

In other words, evaluation phase is where policymakers, as well as well-intentioned think tanks, including other stakeholders, normally come around to offer relevant suggestions or constructive critiques to public policies as opposed to incessant demonization, innuendoes, or engagement of selective renditions of realities on the ground. Ghana’s public policy arena today is saturated with disinformation and misrepresentations of facts in that some group of people in this country led by JD Mahama’s NDC, have (mis)calculated that their best chance of ever winning political power again is to spread misleading information spiced with loud-mouthed insults. The foregoing is also based on the assumption that majority of Ghanaians suffer from political amnesia and are more prone to exhibition of “buyer’s remorse” in political sense.

Seemingly, a considerable number of Ghanaians is so used to corrupt and mediocre leadership in the past such that it is becoming increasingly clear many people find it extremely difficult to separate quality-based and put-citizen-interests-first government from self-centered administration. So, whenever some of these so-called political pundits or “renowned” journalists here in this country engage in or draw some simplistic comparisons between—for example—Nana Addo government and JD Mahama’s past administration, one needs not expend valuable energy to contest those flawed analogies/comparisons.

With all due respect, it is hard trying to come to terms with the thought process behind any political or socioeconomic analyst, commentator or journalist worth his/her salt, attempting to compare the current government of President Akufo-Addo and ex-President Mahama’s regime on equal terms. The two administrations are remotely incomparable on so many fronts, teachers’ allowance is one example.

Certainly, one is helplessly incompetent and shamelessly bribe-prone led by Mr. JD Mahama; whereas the other headed by Nana Addo is competent and has shown serious effort to pursue and prosecute public corrupt officials as shown by the creation of the office of Special Prosecutor. More important, the mere fact that Mahama-led NDC government could not competently manage Ghana’s economy and hence had to put the country under the dictatorial economic conditionalities of the IMF, are in itself a bold admission of total failure of sound management on the part former President Mahama.

In the midst of this naked mismanagement of the nation’s economy under the current NDC flagbearer’s watch, how can anyone with in-depth understanding of quality economic management make honest and well-researched comparison between Akufo-Addo government and that of Mahama’s? What exactly does former President Mahama have to offer Ghana again that he couldn’t deliver for all the long years he was in power besides disinformation, insults, threats, and distortion of the true state of affairs that his die-hard followers desperately pursuing on his behalf?

As quoted from Dr. Soyinka in the opening paragraph of this column, surely, ex-President Mahama is among those African leaders who supervised over incompetent and corrupt regime but has managed to find ways to “be regrouping to loot again and the [people] whose future is being stolen” appear to be excitingly screaming “hail him, hail him!”

Bernard Asubonteng is a US-based writer and political science lecturer.

Joseph Yamin to clear weeds in all abandoned Mahama projects...
34 minutes ago